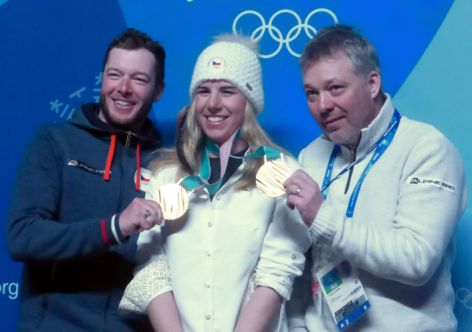 (ATR) Ester Ledecka is the undisputed "Queen" of the PyeongChang Olympic Games.

The 22-year-old Czech athlete from Prague shocked the ski world speeding to Olympic gold in the super-G and then as an encore, staved off a mountain of pressure on her shoulders to win a second gold as the favorite in the snowboard parallel giant slalom on Saturday.

Ledecka’s ski and snowboard coaches say her success stems from her athleticism, commitment and dedication to both sports, while the double Olympic skiing/snowboard champion says it’s all about having fun and doing what she loves.

"I feel that one of my biggest advantages is that I’m having fun on the mountain and with the training on the mountain," Ledecka told journalists at a Sunday morning press conference in PyeongChang.

"As long as I’m having fun and doing it for myself, I think I’m in a good way. It’s very special and I don’t think all the girls have this.

"Sometimes, I want to stay in bed (in the morning), but as long as I’m on the hill, I feel like I’m at home," she continued. "The last week it was crucial for me to change back from skier to snowboarder – I said to myself this is what I’ve been training for, so there was less pressure and it was fun."

Ledecka’s personality bubbled, as she made joke after joke while displaying a carefree spirit sitting alongside her extended team in PyeongChang. She thanked and joked with her skiing coach Tomas Bank and American snowboard coach Justin Reiter, who were sitting to the left and right of her respectively.

Reiter said Ledecka’s athleticism, ability to process coaching and technique, and commitment to succeed is phenomenal.

Ledecka’s American snowboard coach Reiter caused a stir when he took the IOC to court over the elimination of snowboard parallel slalom on the Olympic program when Big Air was added.

"He really saved this year's season and I’m very grateful for everything that he has done," Ledecka said of Reiter.

Asked by Around the Rings if her double skiing/snowboarding gold medal performance might help the occasionally frosty relationship between skiers and snowboarders, Ledecka shifted her body back and forth from left to right and responded without missing a beat.

Laughs and jokes continued as Ledecka’s infectious smile lit up the room.

Asked if she can be a role model for kids participating in multiple sports, she responded quickly: "No, Better not – really. I think I’m not a very good example – I’m too crazy."

On mishaps with her team in PyeongChang, she gave two examples.

"I think the whole time we have a knack for losing and forgetting stuff," Ledecka said. "I lost my number for yesterday’s race, so my whole team was searching for it before my first qualification."

She also described a complicated story involving a lost set of car keys that were accidentally taken on a train to Seoul by her ski coach Tomas’ brother, a former alpine skier for the Czech Republic, causing more panic among the tight-knit group.

Ledecka seemed to have a blast at the press conference, even if she would have rather been skiing or snowboarding.

"Tomas hates press conference, we all do, its nothing against you," Ledecka told the group of journalists.

She talked about her love of chocolate with a laugh.

"I eat a lot of chocolate, I think it’s a doping for me,"

The Czech moderator continuously referred to her as the "Snow Queen" while pointing out her many talents beyond skiing and snowboarding, including playing the guitar.

There has also been talk of Ledecka competing in a third sporting discipline – windsurfing at the Tokyo 2020 Games,

"I already started some training, but right now I need to speed it up a little bit – it’s coming soon," she said with a big laugh.

Ledecka said she will proudly be "waving the flag" for the Czech Republic at the closing ceremony, but there will be no time for a party afterwards. She will be going to sleep immediately after as she is leaving for Prague early tomorrow morning for a ceremony in the Czech capital’s Old Town Square. Then two days later she is off to Turkey for yet another competition.

She said her love of sport began early thanks to her father and grandfather at the Czech ski area Spindleruv Mlyn, where her family has a house.

At age two her father Janek, a famous Czech composer, pushed her down a double black diamond slope when she was only two years old.

Ledecka also thanked her grandfather, who won Olympic silver and bronze as a member of the former Czechoslovakia Olympic ice hockey team in 1964 and 1968.

"Without my grandfather, I would not be here," she said. "He was my biggest inspiration in sport since I was a little child. He taught me to love sport and I hope he is proud of me."

Written by Brian Pinelli in PyeongChang