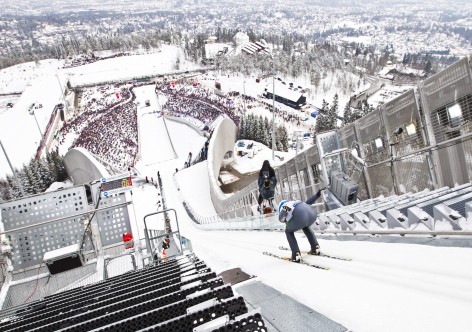 This photo taken on March 17, 2013, shows Norwegian Gyda Enger during FIS World Cup women`s ski jumping competition in Holmenkollen skiing venue during in Oslo. Norway submitted its bid for the 2022 Winter Olympics, where Holmenkollen is expected to be one of the main venues. AFP Photo /NTB scanpix / Vegard Grott / NORWAY OUT (Photo credit should read VEGARD GROTT/AFP/Getty Images)

(ATR) Norway’s prime minister and her Conservative Party could determine the fate of Oslo’s 2022 bid on Wednesday.

The Parliamentary Party Group of the leading party in the current coalition administration holds a crunch meeting to discuss a government guarantee for Oslo 2022.

NRK, the country’s national broadcaster, last Thursday conducted a poll of the 48 Conservative Party representatives. NRK reported that 23 of them backed the Olympic bid, nine were against it, while 13 were undecided and three failed to respond.

"This group will give their advice to the government on whether the Conservative Party should say yes or no to a guarantee," Marit Høvik Hartmann, Oslo 2022’s director of marketing and communications, told ATR.

"We are eager to get to know their advice on Wednesday."

According to Norwegian media reports, government backing for the bid could go either way.

Parliament's culture committee Svein Harberg is expected to recommend his Conservative Party colleagues back the Olympic ambition. But Jens Johan Hjort, mayor of Tromso, which failed to win public support for its own 2018 Winter Olympic bid, is one of a number of high-profile politicians in Norway who is opposed.

If Oslo 2022 fails to win a majority of support from Conservative Party members on Wednesday, the bid may be doomed.

In May, the Progress Party decided against backing the city’s bid application at its annual meeting, citing costs as the main issue. A total of 115 members out of 219, including finance minister Siv Jensen, voted to reject the bid.

The Conservative Party, Norway’s second biggest party, rules with the Progress Party in a minority government.

The government is set to make a recommendation on the Olympic bid to the Norwegian parliament in the coming weeks. Labour, the largest party in the parliament, would find it difficult to go against the wishes of the government.

Norwegian IOC member Gerhard Heiberg, a key figure for the bid, told ATR a few months ago that the Conservative Party "are in the drivers seat".

"It looks positive but it’s still a big battle going on," he told ATR earlier this month.

"Parliament will take its time," he added, noting that its vote on whether to back the bid or not may not come until December.

However, without parliamentary support by the end of the year, the bid is dead. Government guarantees are required as part of the 2022 bid dossiers due with the IOC on Jan. 7.

Almaty and Beijing are the other bidders for the 2022 Winter Games.