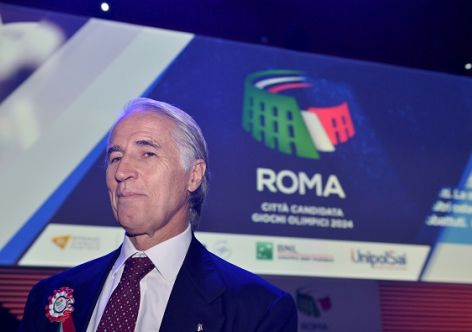 Giovanni Malago, president of the Italian National Olympic Committee (CONI) attends a ceremony to present Rome's bid to host the 2024 Olympic Games, on February 17, 2016 in Rome. Rome, Paris, Budapest and Los Angeles are all in the running to host the Games in 2024 / AFP / TIZIANA FABI (Photo credit should read TIZIANA FABI/AFP/Getty Images)

(ATR) Rome City Council chose to derail a potential referendum on the Rome 2024 Olympic bid during its session last week.

The referendum was put on hold at the request of the Italian Olympic Committee (CONI) that submitted a complaint regarding the referendum’s wording on May 6.

Proponents of the referendum, the Italian Radicals party, have appealed the suspension to the Regional Administrative Tribunal (TAR) and are considering a criminal complaint against the City Council.

"It is a clear attempt to boycott the referendum," says Italian Radicals secretary general Riccardo Magi. "The question we have filed two months ago in the Capitol with the signatures of a thousand Roman citizens on April 18 had already been determined to be admissible by the Committee on the referendum."

Magi also asserts that CONI was not at liberty to request any changes to the referendum or object to its wording.

"The regulation does not allow the intervention of third parties such as CONI in the referendum process," he says. "Therefore the letter in which CONI has raised objections on the question itself is a serious interference."

The TAR rejected an urgent request to proceed with the referendum and says a decision will not be made on the Italian Radicals appeal until June. The referendum is suspended indefinitely until TAR makes its ruling.

Budapest’s bid to host the 2024 Summer Olympics is receiving a boost from Hungary’s governing party.

Members of Prime Minister Viktor Orban’s Fidesz party submitted draft legislation on May 23 aimed at helping the Bulgarian capital beat out stiff competition from Los Angeles, Paris and Rome to land the Games.

According to local media, the ruling party met with the country’s other parties in hopes of making a run for 2024 a national cause in Hungary.

But everyone is not on board. Opposition parties are divided in their support with one reportedly saying that health care and education should come before any bid for a prestigious sporting event.

The new line connects downtown Los Angeles to the famous beaches of Santa Monica in the latest renovation project of the city’s $300 billion infrastructure program. The new line cuts travel time from the beach to Staples Center or the Olympic Coliseum to under 45 minutes.

The infrastructure improvements are designed to make the city more accessible prior to the 2024 Olympics. L.A. 2024 bid leaders Janet Evans and Mayor Eric Garcetti kicked off the ceremony with the pledge of allegiance.

"The opening of Metro’s Expo Line to Santa Monica marks an important milestone for our city," said Mayor Garcetti. "This new transit line will give residents and visitors the world over a chance to 'follow the sun' and get from LA's downtown skyline to the shoreline in minutes."

"The city’s wealth of existing and planned infrastructure will enable us to focus our attention on providing all participants with the best possible Games experience, not on construction deadlines," said Evans.

The IOC will choose the host city of the 2024 Summer Games at the September 2017 IOC Session in Lima, Peru.

The Cannes Film Festival rolled out the red carpet for a delegation from the Paris 2024 Olympic bid team over the weekend.

The occasion was the premiere of "In the Shadow of Teddy Riner," a feature-length film that covers the past three years of the most successful judoka in history.

Riner, who is chair of the Paris 2024 athletes’ committee, is the reigning Olympic champion and eight-time world champion in the heavyweight division. He will be defending his Olympic title in Rio de Janeiro in August.

"I’m very proud of what I have achieved so far in my career and I hope that I can inspire many young people in France and around the world to achieve their dreams." Riner said in a statement.