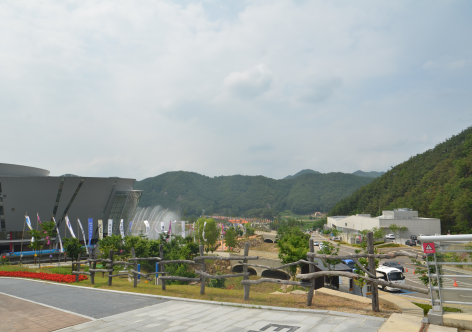 (ATR) A gentle mist formed over hills of evergreen trees from a light rain outside the office of Jung Heon Kim.

The scene was reminiscent of pieces of landscape art produced in the region, but evocative of the mission Kim was trying to spread. Kim spoke from his office in the Taekwondowon, a new venue the South Korean government hopes becomes the center for all things taekwondo.

"This place is said to generate some kind of sacred energy," Kim said in an interview with Around the Rings. "That's why [Taekwondowon] ended up in [Muju, South Korea]. We try to promote this place as a sacred land…this is the Mecca of taekwondo."

Kim is secretary general of the Taekwondo Promotion Foundation. The group is part of the South Korean Ministry of Culture, Sports, and Tourism working to spread and elevate the sport worldwide. The venue, the Taekwondowon, is the first taekwondo-specific venue worldwide. The facility opened in 2014 after nine years of planning and construction. Included in the complex is a taekwondo arena, a museum of the sport’s history, a conference center and hotel, and the offices of the TPF.

Kim says the facility hosted 280,000 visitors last year or about 750 a day, a steady stream of visitors for a county of just 25,000 inhabitants.Future growth is dependent on the South Korean government, which controls the budget for Taekwondowon.

Most of the visitors that come are high performance athletes training in taekwondo, or recreational participants seeking demonstrations and coaching. Kim says the facility is used year round, and six days a week taekwondo demonstrations are held.

Kim speaks of the facility as a "public service" for the sport of taekwondo. Attracting visitors is only one part of the TPF’s goal, the other being to recruit the best taekwondo teachers. That knowledge would be given to taekwondo participants around the world.

Muju County is within three hours of all of Korea’s major population centers, but that does not make it accessible.

Reaching the Taekwondowon requires traversing the area’s mountainous terrain. Kim says the location offers visitors "clean air, shiny stars" and of course the site’s energy. Because operations for the Taekwondowon fall under the South Korean Ministry for Sports, Culture and Tourism, the TPF does not attempt to run the facility for profit. Drawing visitors allows the venue to continue its function, but Kim believes it is more important for visitors to be compelled to see the sport’s "Mecca."

"Even though it is difficult to reach, if there is a value and meaning to come and visit the people will come," Kim says. "If you go up to the top of a mountain and then you find some precious thing from going, the accessibility is not the distance; it is the value of visiting."

North Jeolla, the province in which Muju is located is known as one of the more impoverished parts of South Korea.

Provincial Governor Ha Jin Song spoke of the facility’s potential benefit to the region which is seen as largely rural and left behind. Song says the Taekwondowon will bring around 1000 jobs to North Jeolla and the province has secured an additional $14 million to upgrade the roads around the park.

A total of $218 million was spent by the South Korean government to build the facility, with construction starting in 2005. That figure is about one third of what Kim estimates the original budget was. As construction was ongoing, the amount of money available to produce the complex was reduced over the years.

The reality of the situation is there is not much opportunity for leisure around the Taekwondowon, as its original scope was scaled back. Kim says the proposals for the creation of a graduate school and taekwondo research program will be presented in hopes of beginning in 2018.

The TPF has also sought to lobby the South Korean government to bring public transit options such as a rail route to Muju to help entice more visitors.

Speaking to reporters Song says that the provincial government could look to bring government offices into the Taekwondowon. Kim opposes this plan, which would require approval from the National Assembly in Seoul.

"There are many public offices around in North Jeolla province, and if they want to use this facility for education programs that's okay," Kim says. "In this facility I don't think this is a good idea or the best intention."

Such proposals highlight that while the mystic of the Taekwondowon could be enough of a draw, the politics of the facility continue to influence decisions.

The belief is that after newly-elected President Jae In Moon toured the facility during the world championships the government will continue to look highly on the work done in Muju. Since opening the Taekwondowon has inched closer to breaking even, but it continues to rely on subsidies from the ministry. Kim’s contract has only one year left, meaning the facility could see a totally new direction starting in 2019.

"It was a good sign of interest by the president," Kim said. "I think we will get our budget raised and we can do some more work.

"If I come back in 5-10 years, when I visit I hope I can see the taekwondo training and feel the energy of taekwondo practitioners and grandmasters. I want to see many international people come here to get education, training and sharing opinions of taekwondo and social development. That is a place of sacred land of taekwondo, so I wish Taekwondowon becomes that place."

Travel paid for by World Taekwondo

IBA out as governing body of Paris 2024 boxing tournament

Two-time Winter Olympic medalist skater Bart Swings will also compete. IWGA President José Perurena tells Around The Rings he will arrive in the USA on July 4 confident Birmingham 2022 will be “very successful”

After four months of detainment, Griner will finally stand trial for her arrest on drug possession in Russia.