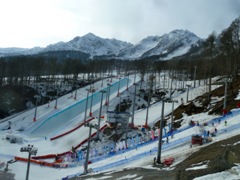 (ATR) Skiers and snowboarders jumped, flipped, twisted and raced down slopes at the Rosa Khutor Extreme Park as organizers dealt with uncooperative weather at the first World Cup test at the future Olympic venue.

Click here to view an On-the-Scene Photodesk from Sochi.

Athletes gave high marks to the venue, which entails six courses and two finishing areas, but a blend of warm temperatures and sun, rain, mixed precipitation and occasionally persistent snow made for a tough week in which three of 10 events were cancelled.

"Very challenging and a very good test so we could see every little detail that would not work and we can prepare well for next year which is important," FIS Snowboard Director Uwe Beier told Around the Rings.

Both ski and snowboard slopestyle – new to the 2014 Olympic program – were cancelled by FIS race directors well before the Feb. 10 scheduled start of the event. However, race staff and hill crews worked diligently once the World Cup kicked off Feb. 13, and only one more event – snowboard parallel slalom – was not held. At the joint freestyle skiing and snowboarding competition, seven event finals were contested over seven days.

"It was a good competition with good qualifications. No big crashes, no big injuries," said Beier. "Overall, I would say it was a very good World Cup event and test event."

Beier emphasized that under similar conditions next February, events would not have needed to be cancelled.

"There are things that have to be improved, but although it is a test event for the Olympics, the resources in terms of personnel and budget is different," he said. "If we had the same weather and same conditions during the Olympic period, we would not have lost any events."

The Rosa Khutor Extreme Park, just one gondola ride up from the Krasnaya Polyana village, sits at an elevation between 1,015-1,200m above sea level.

Snowboarders Get After It

Snowboarders said that the 180m long halfpipe was fast under the right conditions, but that warm temperatures made the walls and transitions soft, making tricks difficult.

"The pipe was challenging this week due to the warm weather, but the event organizers made the right calls to run practices at the right times to do their best to maintain conditions," said Clark.

"I’m happy with the win and how it went tonight and realistically moving forward this could be a similar situation next year, so I chalk it up to experience and I’m happy with where they’re heading."

"They have a little work to do with the halfpipe, it’s pretty soft," he said.

"All in all though, a successful event. It’s pretty impressive here."

The snowboard program continued with the parallel giant slalom event, but then saw the cancellation of the parallel slalom the following day on the same piste.

"Under these weather and snow conditions, everything has to be precise and there was not room for mistakes," said Beier. "There is space for improvement, but again we would not have lost this event next year."

The snowboard World Cup concluded Sunday with the snowboard cross event, where six riders battled should-to-shoulder down a difficult 1,100m course packed with jumps, banked turns, rolls and other entertaining features. The event saw numerous crashes, but no one was seriously injured.

"I really like the racehill and with cold snow where you can use the whole track, it’s going to be really good for the Olympics," said two-time gold medalist Seth Wescott. "I’m definitely excited for the Olympics, and it’s so amazing to see how much they’ve built up the venue."

As will also be the case next February, the freestyle skiers shared the venue with their snowboarding counterparts, making for a jam-packed schedule of training, qualifications and finals.

Halfpipe, moguls and aerials were all contested in the evening under the lights, and athletes raved about the close proximity of the three courses and shared HAM finish area, which is also ideal for media and spectators.

"It is the best venue that I’ve ever seen in my life," said U.S. moguls skier Patrick Deneen. "Deer Valley is incredible, but having this moguls course, halfpipe and aerials coming into the same stopping area is really, really cool."

Moguls kicked off the freestyle World Cup last week, as the world’s top bumps skiers descended the 247m long course under light rain during the finals, the first of three freestyle events held under the lights.

"It’s a real World Cup course, I think it’s kind of like Cypress (the Vancouver 2010 venue)," said Mikael Kingsbury of Canada, the World Cup leader. "It’s not too hard or too easy, just challenging and it’s perfect for the Olympics."

Deneen added: "The course is awesome, the course is incredible, the conditions here are the worst that I’ve ever seen. Just crazy weather, crazy warm, and this night competition throws another element into it. Hopefully, next year it will be ten degrees colder, and if it’s like that, it’s going to be incredible."

Perhaps the most anticipated event was the freestyle skiing halfpipe, which will make its Olympic debut next February. The event took place in foggy conditions with fresh, soft snow in the pipe.

Canadian Mike Riddle, 26, the 2011 world champion, is one of the veterans of the constantly evolving new Olympic event.

"It’s amazing the progression of this sport, every year I think it will top out and not progress any more, but every year people find a way to progress it more," said Riddle. "It’s definitely a learning curve and a steep one, and I’m hoping to keep up with it for a few more years after the Olympics."

Next up for freestyle was aerials, the course and large kickers neatly tucked in between the halfpipe to the left and moguls hill to the right. Finals occurred with tricky visibility and snow falling.

Assoli Slivets was one of two Russian women to qualify for the final, which was easily won by China’s Xu Mengtao.

"I’m pretty excited for this competition and really happy it happened because during the week we had rain, sun, warm, snow, everything but an earthquake," joked the Russian acrobat. "So we are very lucky tonight."

Ski cross concluded the seven-day joint freestyle and snowboarding World Cup. While qualifications were initially scrapped on Monday, FIS freestyle director Joe Fitzgerald was able to squeeze in all qualifying runs, heats and finals on Tuesday, despite continuing snowfall.

In one of the most thrilling events of the week, which like snowboard saw a handful of crashes, Sweden’s Victor Oehling Norberg and Canada’s Kelsey Serwa were victorious.

"The course is awesome," Serwa said of the 1,121m piste. "It's the best track we've been on all year. We're running the snowboard track, which is proving to be good. There are some big jumps with long landings, which is really nice."

X-Games superpipe champion David Wise faced some unexpected challenges upon his arrival to Sochi. His skis did not make it to the airport with him.

"They tried to sabotage me," joked the 22-year-old U.S. freestyle skier. "But we got Uncle Sam on it and tracked them down. I’m the only athlete here who has super custom skis. I designed them myself."

Wise landed in Sochi on a Saturday, and didn’t receive his skis until Thursday, the day before the halfpipe competition.

"I was a little stressed. I was borrowing skis and it’s tough to get used to them," said Wise. "When I got my skis last night, I was like ‘I’m back and you can’t stop me now.’"

Wise finished fifth in an event won by his teammate Torin Yater-Wallace. Assuming the talented freestyler arrives along with his sacred skis next February, he should be considered among the medal contenders.

Written and reported in Krasnaya Polyana by Brian Pinelli.