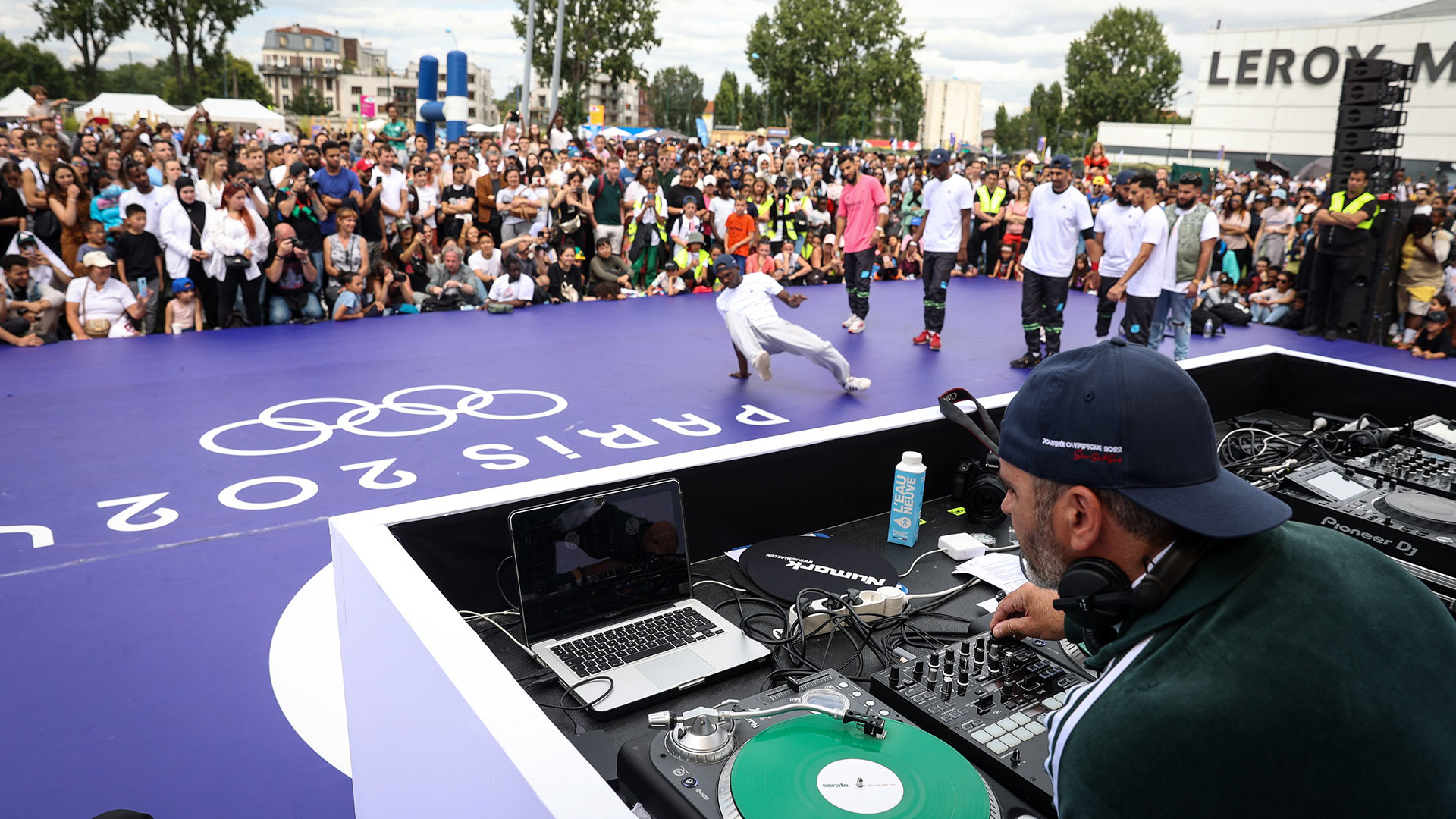 A DJ, music and break dancing enhance the celebration of Olympic Day 2022 in Seine-Saint Denis (Paris 2024)

The Stade de Paris vicinity was transformed into an enormous, open-air playground, showcasing numerous Olympic sports and demonstrations for all to enjoy in celebration of Olympic Day, this past Sunday, June 26.

It marked the first time the Paris 2024 Olympic Day celebration was held in Seine-Saint Denis as previous editions were conducted in the heart of Paris on the quays of the Seine and at the Place de la Concorde.

The festive and energetic event in the northern Paris suburb was the creation of Paris 2024 organizers, the Ministry of Sport, the French national Olympic and Paralympic Committee (CNOSF), along with local government leaders and stakeholders from Saint Denis.

“Sport, entertainment, energy and sharing – this Olympic Day reflected what the Paris 2024 Games will be like for all those attending,” said Paris 2024 president, International Olympic Committee (IOC) member and three-time slalom canoe Olympic champion Tony Estanguet. “It was important for us to organize it in Seine-Saint-Denis, an area that inspires us with its youth, dynamism and creativity, and which will be the beating heart of the Games.” 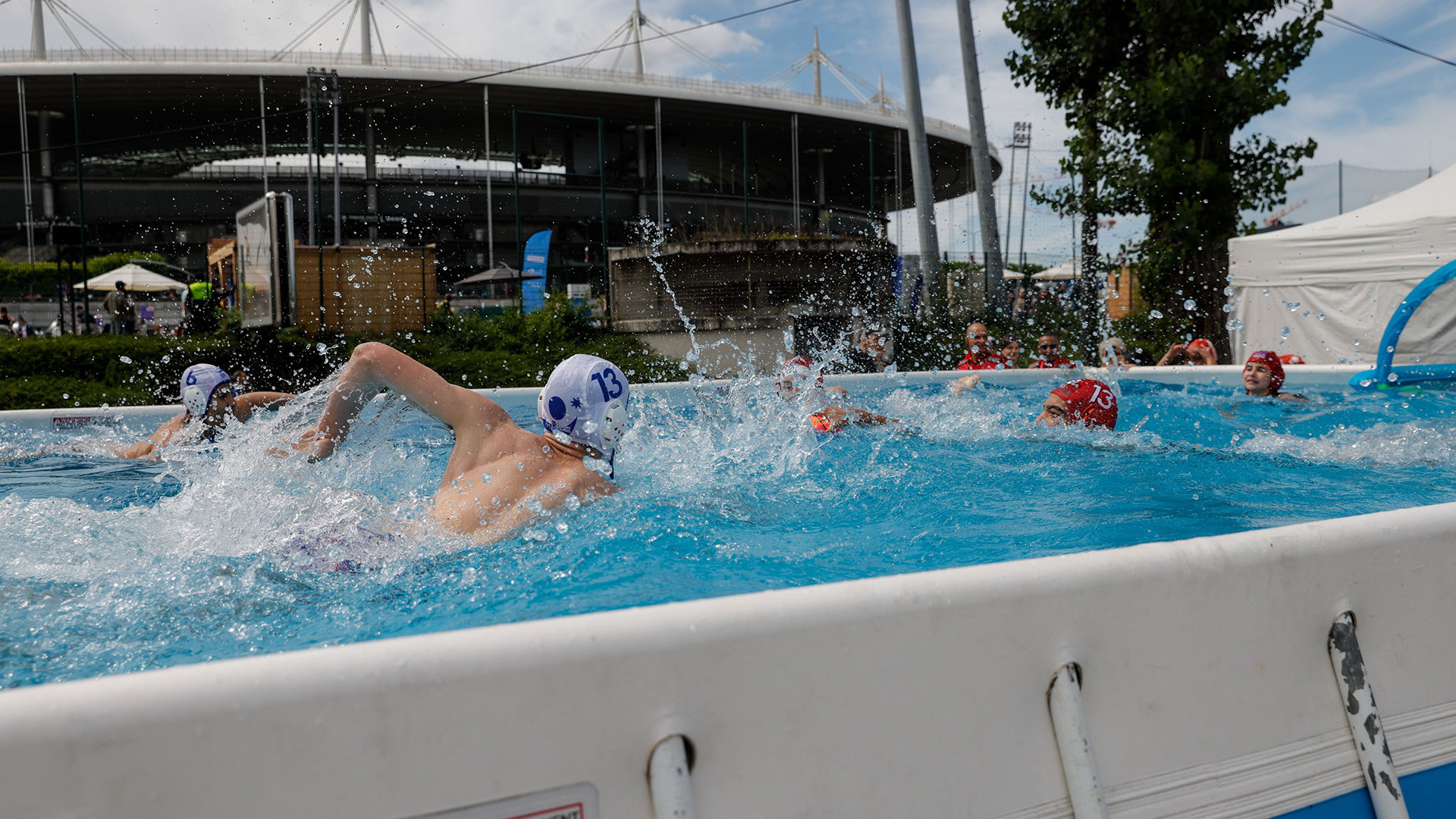 Water polo was one of more than 30 Olympic sports showcased at Olympic Day, in the shadow of the Stade de France (Paris 2024)

With a major emphasis on youth, the event was well-attended by families from local communities, as more than 40,000 meters of tracks, fields and facilities were set up outside the Stade de France. Sports enthusiasts of all ages were able to discover, practice and observe more than 30 Olympic sports on the Paris 2024 program, as well as several Paralympic sports. Art and culture were also weaved into the activities.

The Stade de France was also the venue for the recent UEFA Champions League final at which there were an abundance of spectator and crowd control issues, which led to clashes between police and fans, as well as reports of petty crime perpetrated by local youths.

Saint-Denis, with a population of more than 100,000 residents, has been known for its troubled communities as one of the most crime-ridden and violent areas in all of Europe. Organizers of the Paris 2024 Olympic Day event reported there were no incidents at Sunday’s gathering. 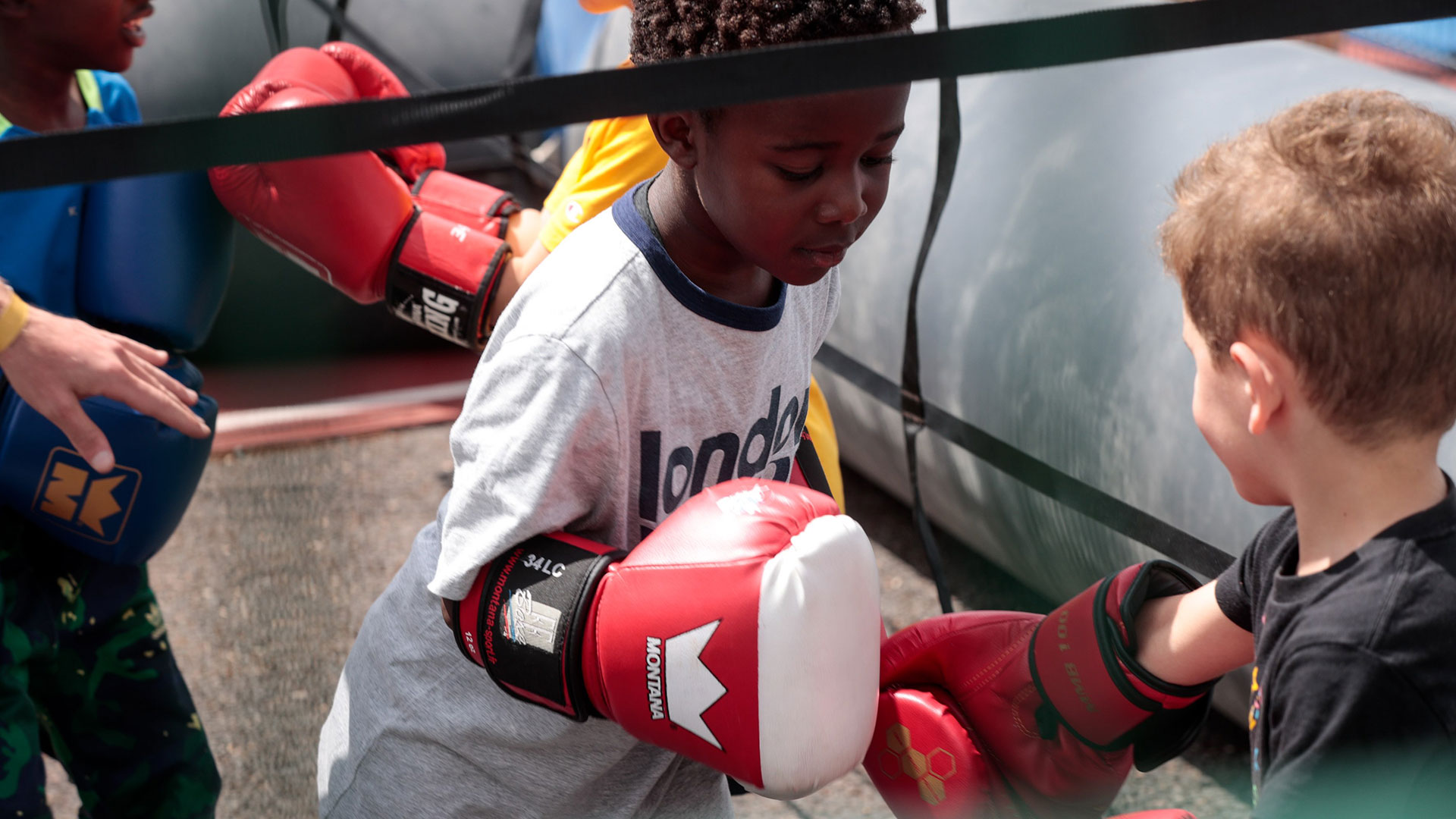 Paris mayor Anne Hidalgo, who did not attend the Paris 2024 Olympic Day event, shared her thoughts on the significance of the occasion, which she envisions will help to bring local communities closer together.

“What a great Olympic Day that has allowed all the public, Parisians and Ile-de-France residents, to come together around sport,” Hidalgo said. “These Olympic and Paralympic Games also aim to be a metropolitan event, with the Seine, a common asset for all, as the common thread.” 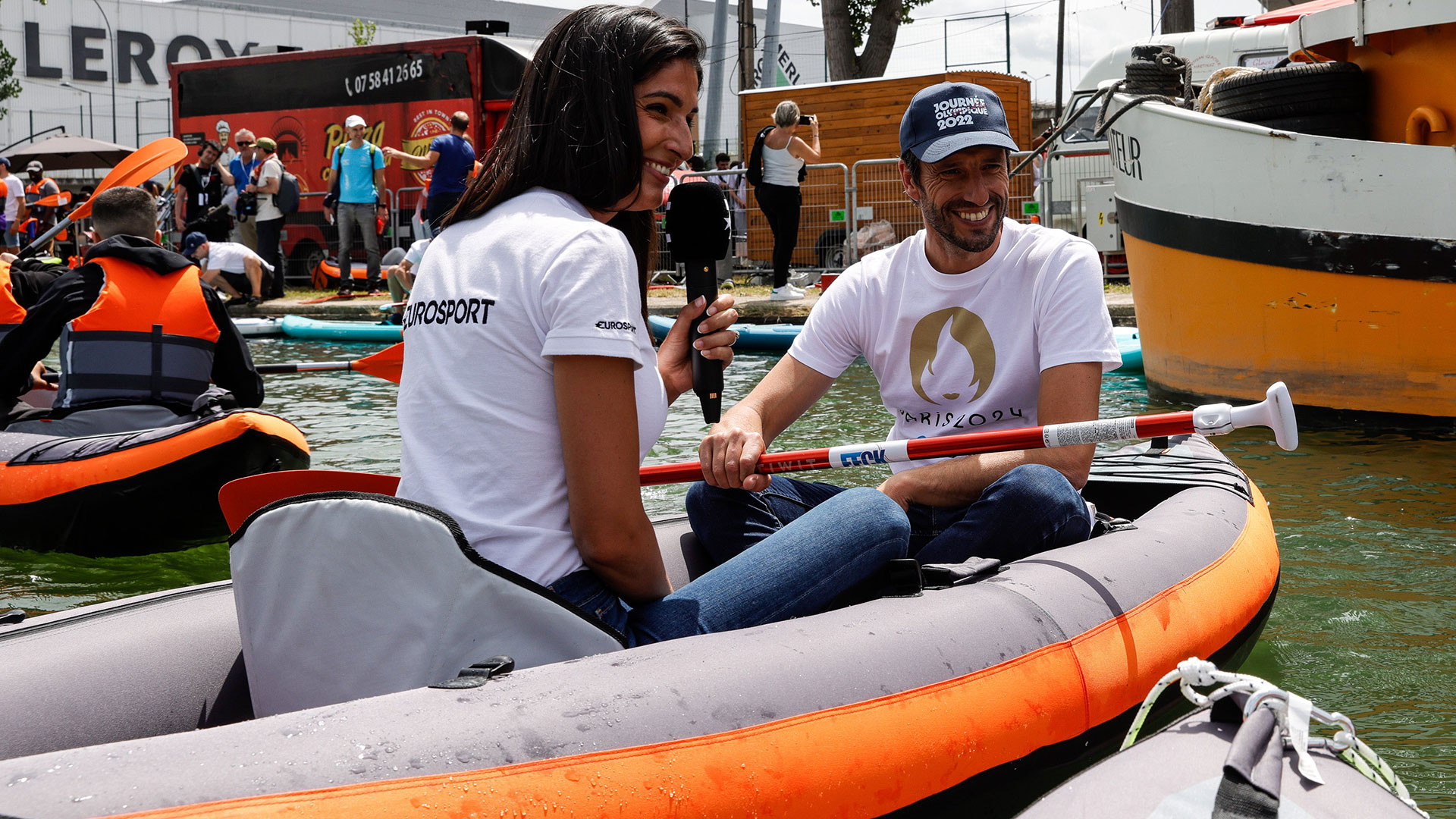 In 2024, Seine-Saint-Denis will be at the heart of the Summer Games. The Northern Paris suburb will be the setting for numerous Olympic events, including athletics, sport climbing, rugby sevens, boxing, and water polo, as well as the home to the Athletes’ Village.

Paris 2024 organizers, sport leaders and politicians are hopeful the Paris 2024 Olympics will contribute to the transformation of Saint-Denis. After the Games, the Athletes’ Village and Media Village are planned to be converted into nearly 4,000 housing units, and some twenty local sporting facilities are proposed to be renovated to benefit the local community. 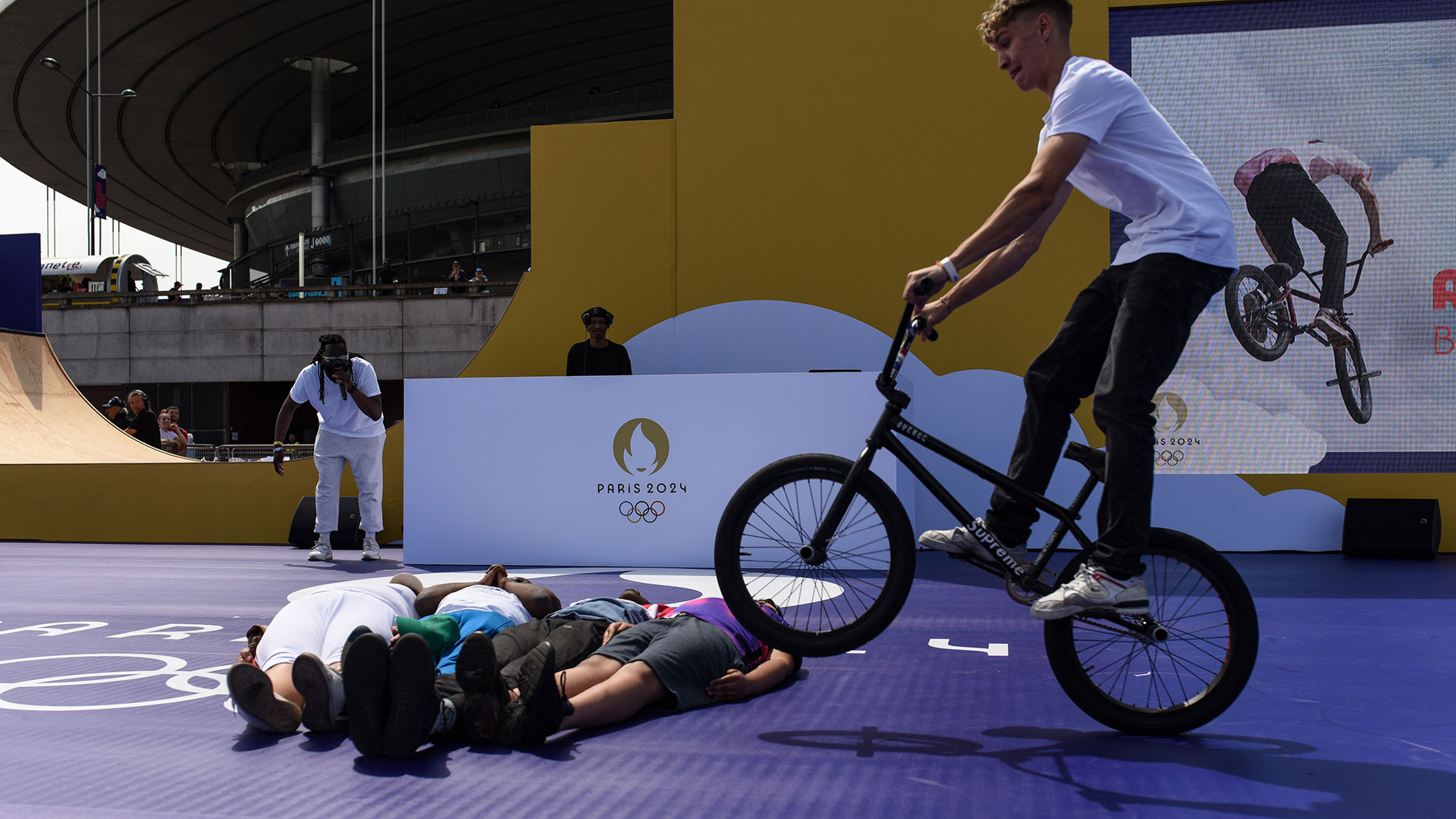 Amélie Oudéa-Castéra, the minister of sport and of the Olympic and Paralympic Games, reflected on Olympic Day 2022, while looking ahead to the Paris 2024 Games, which open on July 26, 2024.

“The Olympic Day in Saint-Denis, which brought together a large number of people from Dyonis and the Ile-de-France around the Stade de France, is a unifying event that gives us all a foretaste of the Games,” she said. “It is this dynamic that we want to build on as we approach our major event; it will enable us to put sport and its benefits at the heart of society.”