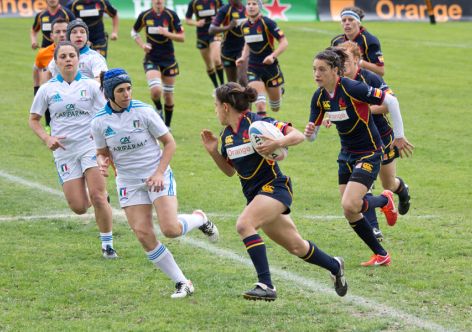 (ATR) World Rugby and Mastercard are teaming up on a five-year partnership to accelerate the development of women in the sport.

In conjunction with the partnership, Mastercard will be working with World Rugby in the federation’s new Women in Rugby Team Powered marketing campaign. It’s designed to inspire more women and girls to play and watch the sport by showcasing it as "the ultimate team sport – on and off the pitch – and how, through the power of togetherness, a team is greater than the sum of its parts".

No financial details of the deal were released, though the federation says the money involved is "transformational".

In a media briefing ahead of the launch, it was made clear that this new partnership for the women’s game is not tied to Mastercard’s longstanding support of the men’s Rugby World Cup.

"This genuinely is a separate partnership in that Mastercard will definitely activate this in a very different way," says World Rugby Chief Executive Alan Gilpin. "Mastercard have been very clear with us for a long time and they’ve been really passionate about being involved in this part of the sport and really see the potential in the women’s game."

Raja Rajamannar, Mastercard Chief Marketing and Communications Officer, adds "we believe in this cause and it is not just for Rugby World Cup alone that we are backing the women. We are investing a humongous amount of money, effort, time behind women’s sports, behind women athletes, behind women positions. It’s across the board. It’s a company-wide priority and it is a philosophy that we are trying to bring to life by walking the talk."

About 500 karateka from 98 countries will compete in Paris on June 11-13 at the Karate 2020 Olympic Qualification Tournament.

They will be looking to secure the final 24 Olympic berths on offer via the tournament.

The competition will be broadcast live and free-of-charge on the World Karate Federation YouTube channel.

So far, 40 karateka have qualified as per the WKF standings.

An additional 12 Olympic berths will be allocated according to continental representation. Up to four additional karateka will book their tickets to Tokyo through Tripartite Commission invitation places.

The Karate competition at Tokyo 2020 is scheduled for August 5-7 at the iconic Nippon Budokan, with medals being awarded on each competition day.

Reindl, 66, made the announcement last weekend as the 2021 IIHF Ice Hockey World Championship was wrapping up in Riga, Latvia.

A three-time Olympian and bronze medalist at Innsbruck 1976, Reindl currently serves on the IIHF Council. He was nominated for the presidency by his home National Association.

He joins another former player who won Olympic bronze (Albertville 1992), Petr Briza of the Czech Republic, as a candidate to follow Fasel. Briza is also a member of the IIHF Council.

Fasel, asked about potential successors at his press conference in Riga last weekend, said "Both Petr and Franz are good candidates and on a personal note, I like it when they are former players. I think it’s important that somebody leading a Federation has the knowledge of the game for when there are sometimes difficult decisions."

The Swiss decided not to seek a seventh term but has stayed on an extra year due to the pandemic which delayed elections.

The election will be this September at the federation congress in St. Petersburg.