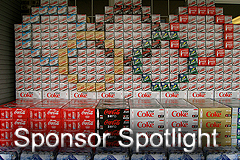 "Our dream is Krasnodar region to become the most sportive region in Russia," Tkachev said.

Chernyshenko said, "Today we are already benefitting from the powerful support of the Krasnodar Region – Krasnodar universities are actively participating in creating the volunteer infrastructure, a barrier-free environment is being developed for people with disability, ecological and educational Olympic programs are being conducted.

Sochi is in the southern tip of the Krasnodar region.

TOP sponsor Coca-Cola says it has met or exceeded "all long-term growth targets," in its fourth quarter and full-year reports.

The company reports a 6% growth in worldwide volume growth for the fourth quarter and 5% for the full year. That is up from 5% growth in the prior year quarter.

"We once again delivered strong results this quarter, with volume growth reliazed across all five of our geographic operating groups," Muhtar Kent, The Coca-Cola Company chairman said in a press release.

"Further, as we strategically invest in inspirational marketing as well as sales and marketplace execution, we again gained broad-based worldwide volume and value share.

The Olympic sponsor will celebrate its 125th anniversary this year.

Rock-It Cargo joins Dextro Energy, Suunto, Skins, Specialized and the Laureus Sport for Good Foundation as sponsors of the series.

"Similar to the needs of a triathlon athlete, a sport logistics provider also requires persistence, focus, a good strategy and a strong will to achieve their targets," Rock-It Cargo Germany’s managing director Andreas Mattick saidin a statement.

The series will begin in Sydney April 9 and end in Beijing in September.

Banking and financial services organization HSBC has extended its sponsorship of FEI Eventing for another three years.

HSBC will remain the title sponsor of the HSBC FEI Classics until the end of 2013 and the HSBC FEI European Eventing Championships in 2011 and 2013.

"As part of every sports sponsorshipHSBC undertakes there is a commitment by the bank to invest in the grassroots level of the sport and over the coming years HSBC will be working closely with the FEI to help continue the growth and development of Eventing around the world," Giles Morgan, HSCB Group Head of Sponsorship, said in a press release.

HSBC has sponsored the series since 2008. It will give nearly $1 million in prize money for the competitions.

TD Ameritrade Holding Corporation is the U.S. Olympic Committee’s first-ever official online broker, the first such deal born out of a recent marketing partnership between the USOC and NBC.

The stocks giant will sponsor the USOC and 2012 U.S. Olympic Team. The agreement also includes a media buy on NBC.

"The USOC-NBC proposition to most companies is a better and a stronger proposition than buying the rights separately and at different times," Olympics marketing veteran Rob Prazmark tells Around the Rings.

"Previous to this effort between the USOC and NBC, it’s never been tried before. We’ve been in the marketplace for the past six months, and this is the first success that we’ve had, and we look forward to more successes."

Prazmark, the founder and CEO of 21 Marketing, represents the USOC in its joint-marketing initiative.

…The International Football Arena has gained Imtech Deutschland GmbH & Co. KG as a new sponsor for its conference in Switzerland in November.

With reporting from Isia Reaves Wilcox