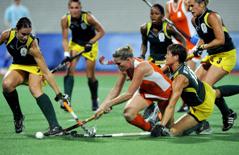 Els Van Breda Vriesman loses the presidency of the hockey federation - and her seat on the IOC. (ATR) (ATR) A new president takes charge of the International Hockey Federation following a vote this weekend that has implications for the IOC, as well.

Negre, 62, is the former president of the European Hockey Federation.

Van Breda Vriesman, 67, has served as president since 2001. Her defeat also means the end of her seven-year membership on the IOC. She told Dutch media that she had sent a letter Monday to the IOC resigning her seat, which was linked to the FIH presidency.

The actual vote totals from the 89 national federations at the Los Angeles meeting were not disclosed. Other federation incumbents, including a vice president and two executive board members won re-election.

“I am very happy to be elected and I would like to thank the National Associations for voting for me,” said Negre in a statement. He competed for Spain in field hockey at the 1968 Summer Olympics in Mexico City. He has said he would like to expand the international exposure of field hockey with a world professional tour. Leandro Negre is the new president of FIH. (FIH)

Neither Van Breda Vriesman nor Negre engaged in contentious campaign, with both stressing their commitment to the sport. Van Breda Vriesman did open a web site to promote her candidacy, http://elsvanbreda.com. The site did attract the attention of the IOC when an endorsement of Van Breda Vriesman from Madrid 2016 CEO Mercedes Coghen appeared on one the pages, but was later removed.

The quote raised questions about conflict of interest. Van Breda Vriesman at the time was a member of the IOC Evaluation Commission that will be visiting the four 2016 cities next year. But with her formal resignation from the IOC, Van Breda Vriesman also cut her ties to the 2016 commission.

It’s up to IOC President Jacques Rogge to name a replacement for her seat on that commission. The field of possible candidates would presumably be limited to international federation leaders not from any of the four countries with cities in the race: Brazil, Japan, Spain and the U.S.

But Van Breda Vriesman’s seat as an IOC member is gone, putting overall membership down to 110 against a limit of 115. Van Breda Vriesman’s resignation presumably would open a spot for another federation official to take an IOC seat, but there’s no guarantee any will be nominated next year for election at the IOC Session in Copenhagen. The loss of a female IOC member may spur at least consideration of another woman, given the IOC’s great gender imbalance.

If there are new IOC members elected next year, they will be chosen after the vote on the 2016 Olympics. For those four cities in the race Van Breda Vriesman’s demise lowers the number of votes needed from the IOC next Oct. 2 to secure the Games. What with the loss of possibly other IOC members between now and then, as well as members disqualified from voting while bids from their countries remain in contention, a winning majority could hover in the range of just 50 votes.