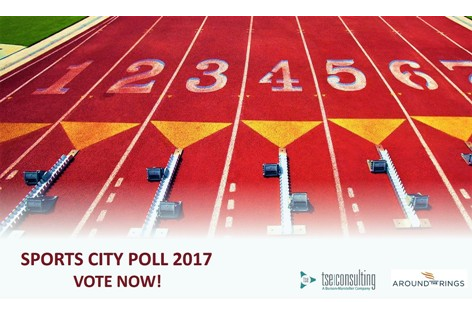 (ATR) Time is running out to vote for the top sports cities of 2017 as the annual Sports City Index closes on Dec. 31.

Presented by Around the Rings and TSE Consulting, a Burson Marsteller Company, the poll includes only one measurement: cities perceived to have the strongest association with sport.

The 2017 Sports City Index has had more participants than ever before, with well over 1,100 votes having already been cast as the poll draws to a close.

Around the Rings understands that the top five could include at least one or all of London, Los Angeles, or Paris. If you agree or believe other cities should make the cut, make sure to vote now here.

Results are based on a public online vote. Those opinions are coupled with an industry-weighted vote from sports experts comprised of 100 leaders across International Federations, National Olympic Committees, sports media and other influencers in the world of sport.

Respondents choose from a list of 50 cities based on criteria such as staging recent and upcoming Olympic Games or other major multi-sport events, hosting professional teams and organizing major championships or world-class events such as tennis Grand Slams and Formula 1 races.

Ed Hula, Editor, Around the Rings says: "As we travel the world to cover major sports events, we can see that cities increasingly invest in the development of strong promotional campaigns to enhance their international presence and drive tourism revenues. This Ranking provides cities with a tremendous opportunity to see if their efforts are paying off! 2017 was another exciting year for sport cities and we look forward to the upcoming results."

The results will be released in January 2018.