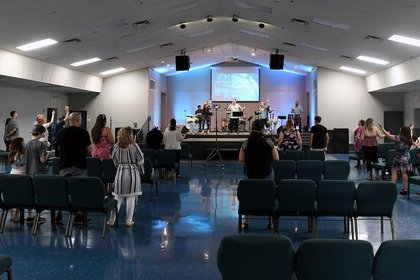 People attend a service in a chapel at the International Church of Las Vegas on May 31, 2020 in Las Vegas, Nevada. Photographer: Ethan Miller/Getty Images

(Bloomberg) -- The U.S. Supreme Court declined a chance to further buttress religious rights during the pandemic, turning away an appeal from a Nevada church that said a federal appeals court didn’t go far enough when it eased the state’s capacity limits on houses of worship.

The case had offered the court’s conservative wing a chance to reinforce a November ruling that blocked strict New York City restrictions as unconstitutionally singling out religious institutions.

A federal appeals court temporarily lifted a 50-person cap that had applied to Nevada houses of worship and said they could hold services at as much as 25% of capacity. The panel also told a trial judge to consider relaxing the limits further to comply with the Supreme Court’s New York ruling.

Calvary Chapel Dayton Valley a Reno-area church, said churches should be subject to the 50% cap that apply to retail stores.

The rebuff marks the second time Calvary Chapel has been rejected at the Supreme Court, which in July voted 5-4 to leave intact the 50-person cap. That order came before Justice Amy Coney Barrett joined the court and strengthened its conservative majority.