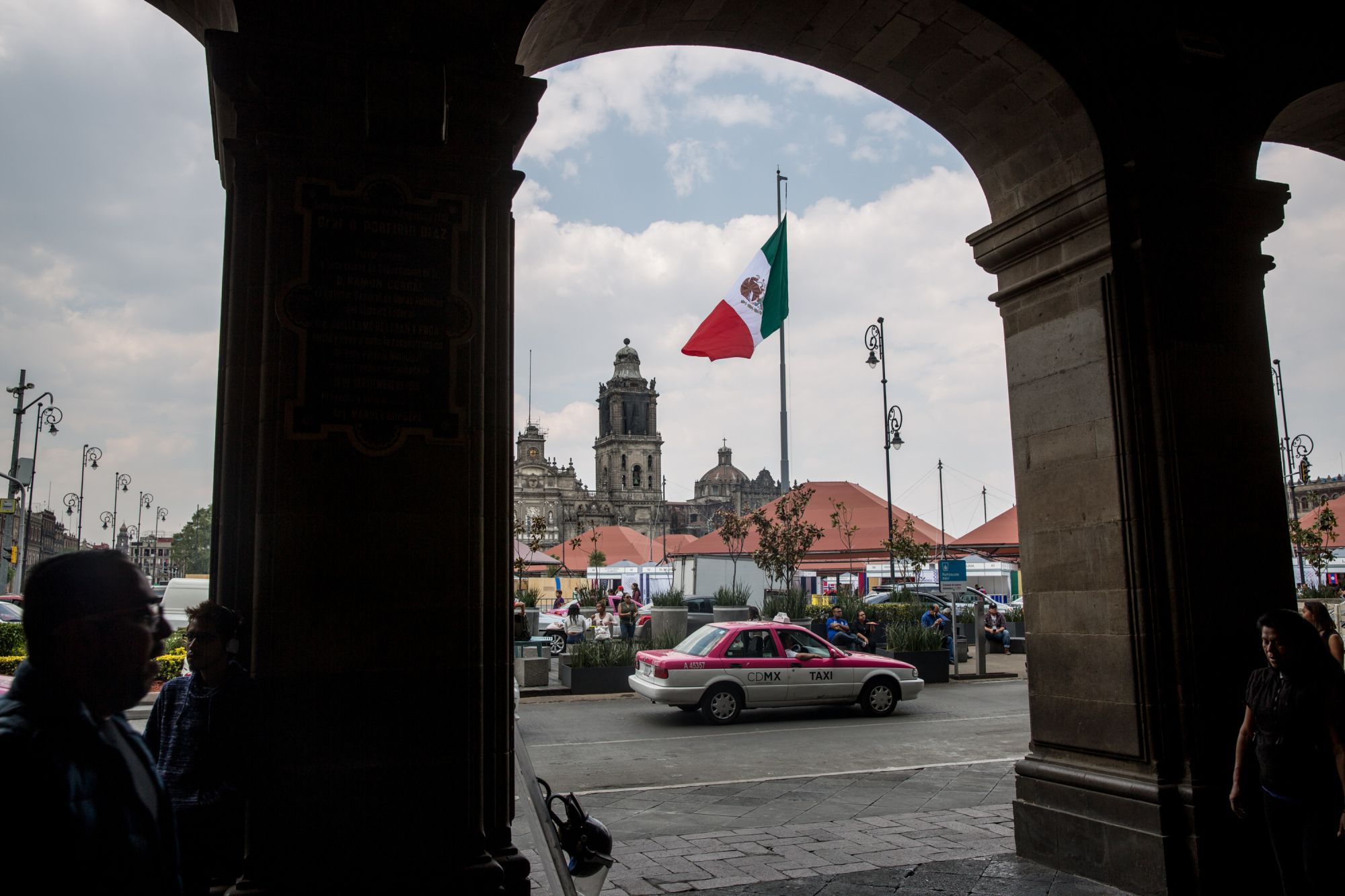 A taxi cab passes in front of the Mexican flag flying at the Plaza de la Constitucion (Zocalo) in Mexico City, Mexico, on Friday, April 13, 2018. Mexico's peso extended losses for a third day amid profit-taking outflows as the currency failed to stay strong past 18.00 key level. Photographer: Alejandro Cegarra/Bloomberg

The decision, which was reached on Jan. 14, is set to be made public in coming days, the people said, asking not to be identified because the ruling hasn’t been announced.

A spokesperson for the antitrust commission, known as Cofece, declined to comment. The agency is barred from speaking publicly about its rulings until all the parties involved have been notified.

JPMorgan, Bank of America, Citigroup, Deutsche Bank and Barclays declined to comment, and a spokesman for Santander Mexico said the company would comment when there is a public resolution of the matter by Cofece. BBVA didn’t immediately respond to a request for comment.

Banks could face fines of as much as 10% of their local units’ revenue under Mexican law, but it isn’t yet clear if all the companies that were named in 2019 will be fined or how large the levies will be. Eleven current and former traders also testified in the case, registries on the antitrust commission’s website show. Banks were being notified Thursday and Friday, one of the people said.

The decision by the antitrust regulator would mark a rare rebuke for banks and traders in Mexico, where jail time for financial crimes is extremely rare and fines are relatively small. Mexico lagged behind other countries nearly a decade ago after regulators uncovered manipulation in interest-rate markets in the U.S. and Europe.

“Mexico was behind in terms of investigating potential collusion among traders, but since that was already a big issue in the U.S. or the U.K, those regulators influenced the banks, and that worked toward addressing the problem in Mexico even before the antitrust agency started to look into it,” said Sergio Luna, the former chief economist at Citibanamex who stepped down late last year and now works as a consultant.

The antitrust ruling, which one of the people said is around 2,000 pages long, follows a probe launched in 2016 that looked back into 10 years of traders’ chats and bank records.

While Cofece originally said it was investigating banks for colluding to manipulate prices in both central bank auctions and when selling to funds and clients, the charges focus on alleged price rigging in the secondary market during the early part of the last decade, the people said. The case doesn’t include evidence regarding central bank auctions, they said.

Last year, Barclays and JPMorgan agreed to pay a combined $20.7 million to settle charges in New York that their Mexican affiliates conspired with other banks to sell Mexican bonds at inflated prices to U.S. pension funds. That case stemmed from information gathered in the Cofece probe. The U.S. judge later threw out charges against the rest of the banks, arguing he didn’t have jurisdiction over alleged manipulation in Mexico.

The U.S. case cites transcripts obtained by Cofece that allegedly show traders formed chat rooms, including one called the “hamster squad,” where they discussed customer orders and coordinated trades.

Mexico’s securities and banking regulator did its own investigation and fined six global banks and traders in late 2018 a total of a little over $1 million for manipulating bond-trading volumes.