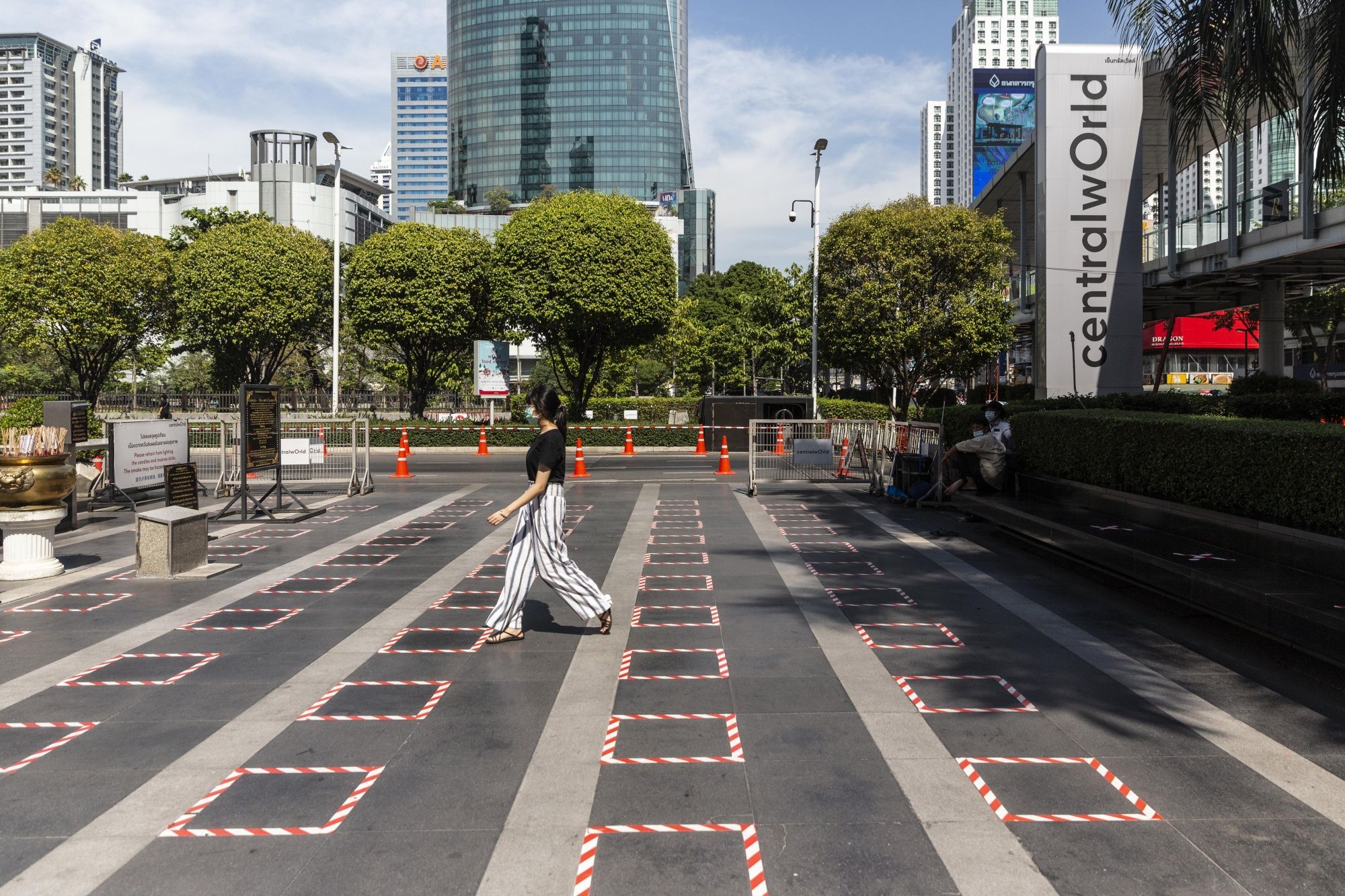 Social distancing markers at the Trimurti Shrine next to Central World Mall in Bangkok, Thailand, on Monday, Jan. 4, 2021. Thailands economic conditions are expected to deteriorate further this year as the nation battles a resurgence in the coronavirus, according to a national survey.

The Bank of Thailand may lower its forecast for economic growth -- currently at 3.2% for this year -- as curbs on business and travel chill activity in areas that account for 75% of gross domestic product, Senior Director Chayawadee Chai-Anant said at a briefing Friday. A prolonged outbreak could also trigger liquidity problems for businesses and put millions of jobs at risk, she said.

With the government opting for localized restrictions rather than a national lockdown, the hit to the economy is expected to be less severe than last year, when a broad lockdown was imposed to contain the initial outbreak, Chayawadee said. Still, if the curbs are kept until June with some easing from March, they could shave off as much as 1.5 percentage point from growth this year, the central bank said.

Earlier this week the government unveiled a $7-billion dollar program of cash handouts and extended several subsidy plans to buffer the economy. With rising household debt a concern, the central bank also extended various debt-relief measures until the middle of the year for individual and business borrowers hurt by the new outbreak.

“There are still a lot of uncertainties ahead with the outbreak situation, vaccine rollout and economic measures,” Chayawadee said, adding the stimulus measures should be targeted at individuals and businesses less capable of handling the shocks.

The new outbreak began in mid-December and has spread to 60 of Thailand’s 77 provinces, with the country’s total infections since the pandemic began more than doubling in the past month alone. The central bank indicated earlier this month that the resurgence might well lead the economy to undershoot previous forecasts.

“There is a possibility that we will need to revise down the GDP forecast. But the pace of adjustment will need to await more information and we will need to get approval from the monetary policy committee,” Chayawadee said. “Household debt will weigh down on consumption, and will slow down economic recovery.”

The central bank kept its benchmark interest rate unchanged last month for a fifth straight meeting, while slashing this year’s GDP estimate from earlier expectations of 3.6%. The next policy meeting is set for Feb. 3.

In its latest policy report, issued Jan. 6, the monetary authority said it was closely monitoring the situation and would take “appropriate monetary policy decisions in the period ahead.”

An estimated 4.7 million workers may be affected by the new outbreak with 1.2 million likely to become unemployed or work less than 24 hours in a week, Chayawadee said. Sectors such as retail, trade, hotel, and restaurants were affected more than logistics, auto and auto parts industries, she said.

“The economic impact will be uneven, with more impact felt in areas with more curbs and more infections, that may force some factories to shut down,” Chayawadee said.