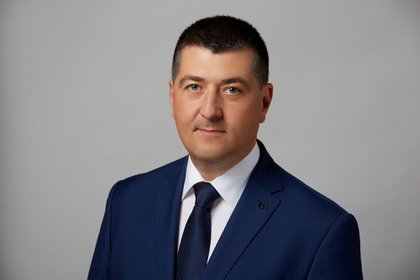 (Bloomberg) -- Bank Pekao SA has no plans to participate in future rescue operations in the Polish banking industry as the country’s second-largest lender starts to digest the forced takeover of an unprofitable rival, its chief executive said.

In his first interview since the acquisition of Idea Bank SA last week, acting CEO Leszek Skiba stressed the deal orchestrated by the market regulator is likely to help Pekao’s goal of boosting lending to small companies, where the potential for profits is higher. He also promised a payout of outstanding 2019 dividend once the current ban is lifted.

“When it comes to any other potential takeovers, which could come up within the resolution mechanism framework -- we don’t see a role for us there,” Skiba said. “We feel fulfilled and want to grow organically now.”

Once a unit of Italy’s UniCredit SpA, the bank was sold to state-controlled entities in 2016 as the government pursues a strategy of clawing back control over key industries such as finance and energy.

The aim of the populist leadership, which has defied the European Union over its political takeover of democratic institutions such as the courts and media, is to create state champions in the economy.

Pekao was the only bank to express interest in buying Idea after five other Polish lenders were sounded out about the potential deal, but refused to participate.

Skiba’s comments are likely to feed into speculation about the potential list of suitors for another unprofitable lender, Getin Noble Bank SA. The CEO of state-run PKO Bank Polski SA, the country’s largest bank, this week ruled out any takeovers in Poland.

Burdened with Swiss-franc mortgage loans, Getin Noble is seen by some analysts as the next major target of a regulatory clean-up, although the watchdog insisted this week it’s in a much better shape than Idea.

Ex-billionaire Leszek Czarnecki, who owned Idea and controls Getin, has lashed out against the move, calling it a politically-motivated revenge and threatening to sue.

Skiba, who joined Pekao last year from the Finance Ministry, said he isn’t worried about risks that might arise from potential lawsuits as they wouldn’t affect the bank or its management.

Still, the unexpected resignation of two Pekao board members just hours after the Idea deal was announced on New Year’s Eve, shows the scale of controversy surrounding the transaction.

While both executives cited a “different vision” for the bank, reports in the local media suggest their departure was linked to political jostling within the government, which controls Pekao through state-owned insurer PZU SA and the development fund PFR.

The takeover of Idea won’t weaken Pekao’s balance sheet or curb its ability to resume dividend payments, according to the CEO. Polish financial watchdog KNF has asked banks to refrain from payouts through the first half of this year due to uncertainty about the impact of the Covid-19 pandemic.

Pekao is in a better financial shape than the rest of the industry because of a much higher level of loan-loss provisioning related to the pandemic, Skiba added.

“We are ready to pay the outstanding dividend for 2019 and for 2020, once the KNF gives us the green light,” he said.