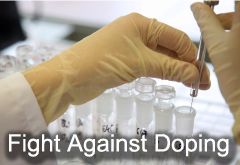 (ATR) British Olympic Association chairman Colin Moynihan stepped up his war of words with the World Anti-Doping Agency on Wednesday when he confirmed that the BOA will "vigorously defend" its lifetime ban for dopers before the Court of Arbitration for Sport.

Moynihan told a press conference following a scheduled BOA board meeting that the association was defending its 19-year-old selection policy –which rules out picking athletes who have served punishments for drug violations –on behalf of athletes.

"The BOA will vigorously defend any challenge to the selection policy, which is a clear expression of the will and commitment of British Olympic athletes," he told reporters.

He revealed that WADA had in the last 48 hours written to the BOA saying the by-law was not compatible with its code.Moynihan expressed surprise at the "out of the blue" challenge because he said WADA had deemed the British Olympic body to be in compliance with its code only two years ago.

Moynihan, who on Tuesday criticized WADA for failing to make progress in catching cheaters in the fight against doping, said the BOA was forced to respond after receiving legal threats from the anti-doping body. But it was WADA who was initiating proceedings at CAS, he said.

"Our lawyers took the view we have a strong case to make – and we are making it," he said. "We believe we have been compatible through the life of WADA. Our selection policy has received strong support over 19 years from over 90 percent of our athletes.

"We believe it is incumbent upon us to put athletes first, second and third in what we are doing. They want to compete clean."

Moynihan noted that the BOA's lifetime ban on doping offenders had received strong support from the IOC and its president Jacques Rogge.

But last month CAS dismissed the IOC's eligibility rule, which prevented athletes given a drug ban of more than six months from competing in the next Olympics. It means U.S. 400m Olympic champion LaShawn Merritt will be allowed to defend his title in London next year.

Since the CAS ruling, pressure has mounted on the BOA to drop its lifetime ban for drug cheats. If it loses its case at CAS, the door will be open for convicted drug cheats such as sprinter Dwain Chambers and cyclist David Millar to take part at next summer's Games.

Moynihan said the BOA's stance protected the rights of those who competed fairly, saying allowing any clean athlete to lose their Team GB place at the Olympics at the expense of a doper was "the most heinous crime".

"I am keen to have resolution as soon as possible," hesaid, adding that it was a distraction in Team GB's preparations for the London Olympics but that he wanted to offer clarity to British athletes bidding to participate in the Games.

"It is disappointing to read the BOA president's comments, some of which are misinformed and inaccurate, and many of which have been addressed by WADA stakeholders in the last code review or by WADA in its present activities," Fahey told The Associated Press.

But Fahey's comments only fueled Moynihan's frustrations with WADA.

In his closing remarks at Wednesday's press conference, Moynihan reiterated his calls for an overhaul of WADA's fight against doping. He claimed the detection of drug cheats was "worse than since the Cold War" and said WADA's sanctions process and whereabouts testing should be reviewed.