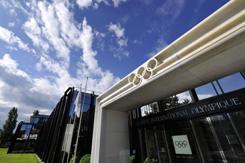 (ATR) IOC President Jacques Rogge leads a group of colleagues at IOC headquarters in Lausanne examining bids for the U.S. TV rights for the 2014 Olympics and beyond. They are expected to make a decision today.

Executives from ESPN/ABC, Fox and NBC/Comcast dropped their bids for the next round of U.S. Olympic rights into a clear box at IOC headquarters.

Fox is bidding for the four Olympics from 2014 through 2020, while ESPN/ABC and NBC/Comcast did not disclose their plans. Networks had the option of bidding only for the 2014 and 2016 Games or for a package of four Olympics.

NBC, which presented last on Tuesday afternoon, brought a team of 17 people, including Olympic host Bob Costas. He said NBC made a "compelling" presentation. Absent from the presentation was Dick Ebersol, the man who defined NBC Olympic coverage since the 1980’s. Ebersol resigned last month as NBC Sports chair, unable to come to terms on a new contract with his new bosses at Comcast. His successor, Mark Lazarus, refused to speculate on what the absence might mean for NBC’s bid.

"I wasn't here before," said Lazarus about previous bids from NBC with Ebersol as part of the team. "We put our best foot forward," Lazarus said.

ESPN made its presentation on Tuesday morning, Fox kicked off the proceedings on Monday afternoon in the room at IOC headquarters where Executive Board meetings are held.

ESPN needed just one hour and 20 minutes to make its case. ESPN president George Bodenheimer, who has said his network's many platforms will help grow the Olympic Movement, pronounced himself "happy" after the pitch.

Rogge joked that one thing was clear after the presentations: The IOC now knows that all three networks are No. 1 in the United States.

The IOC has said it hopes to generate at least $2 billion in revenue from the U.S. rights to 2014 and 2016. The rights deal in the U.S. is the largest single source of cash revenue to the IOC.

Written by Karen Rosen with reporting in Lausanne by Ed Hula.