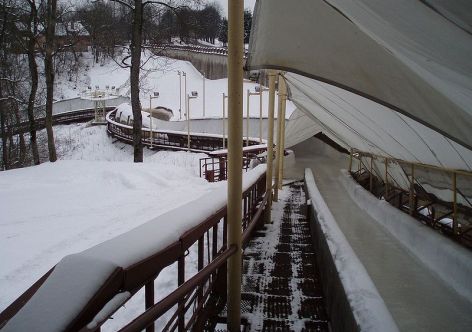 A cooperation memorandum between the Swedish capital and the Baltic country means the bobsleigh, skeleton and luge events for a Stockholm Winter Games would be held at the Sigulda sliding track in Latvia.

It’s a one-hour flight from Stockholm to the Latvian capital Riga and a one-hour bus drive to reach the venue. There are also ferry links connecting Stockholm and Riga.

A feasibility study will be carried out by September 15, according to the Latvian news agency LETA. The track currently cannot host four-man competitions and would need to be renovated should Stockholm win the right to host in 2026.

Sweden was willing to build a sliding track but the IOC and the federations don’t want any more of those venues built for Winter Olympics. Faced with getting a negative mark on their evaluation if they built one, the Stockholm bid had been looking at options in Norway, Germany and Latvia before settling on the latter.

The future of the Stockholm bid remains up in the air until after Sweden’s national elections are held on September 9.

"The Swedish government is supposed to make a final decision on the bid in the autumn,'' Latvian Olympic Committee press secretary Martins Malmeisters told LETA. "Sweden is holding election in the fall, and then it will be clear what the final decision will be.''

The bid corporation for Calgary 2026 is officially in business.

Scott Hutcheson, who was named chair of the BidCo last week, told the Calgary city council’s Olympic assessment committee on Tuesday that Calgary 2026 was officially incorporated last Friday. He added that most of its directors would be chosen by the end of this week, according to the Calgary Herald. The search for a CEO to lead the project to create a bid book is ongoing.

The city is hoping to have the bid book finished in time for an expected November plebiscite on hosting the 2026 Winter Games. The IOC deadline for the bid book is January.

Hutcheson is making transparency a key feature of the BidCo. He has already stepped down from the boards of a number of sports-related organizations.

City administrators say they will need additional funding above and beyond the CAN$30 million that has already been committed to the bid. The costs will be for staffing a so-called Olympic secretariat that would be serve as a liaison between the city and the BidCo.

One cost-cutting move discussed by the Olympic committee on Tuesday was to use the existing WADA accredited laboratory in Montreal for drug testing during the games. It cost Vancouver CAN$20 million to build a temporary lab for the 2010 Winter Games.