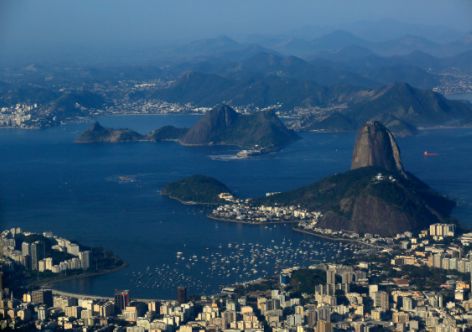 Boats sit in Guanabara Bay in this aerial photo taken in Rio de Janeiro, Brazil, on Friday, Aug. 22, 2014. Brazilian analysts reduced their 2014 economic growth estimate for the 13th straight week after consumer confidence dropped to the lowest since the recession of 2009. Photographer: Dado Galdieri/Bloomberg via Getty Images

(ATR) Rio de Janeiro 2016 existing water venues will not be as clean as promised in its bid book.

The environmental secretary of the Rio de Janeiro State told the AP that the goals put forth in the Rio 2016 bid book of treating 80 percent of waste entering Guanabara Bay will not be reached.

"I’m not worried about the water quality in those areas; I’m much more worried about floating garbage there. [The "eco-barriers"] aren’t working well at all."

The "eco-barriers" referred to by Correa are large nets that filter the large garbage pieces flowing into Guanabara Bay.

Joe Brown, a professor in environmental engineering at the Georgia Institute for Technology, believes that the solid waste issue is the least of Rio’s problems.

"I think it’s a lot more feasible to solve the solid waste issue than it is on the sewage issue partly because of the complexity of the infrastructure that’s needed," Brown told Around the Rings by phone.

"I think their goals for getting the solid waste problem under control are feasible and they are likely to make progress and the physical trash that ends up in the bay."

Brown admits he’s only been following the environmental cleanups "casually," but understands the problems that the city faces in such a large infrastructure project.

"So like a lot of cities in Brazil that have significant numbers of people living in informal settlements and that sanitation infrastructure that would be needed to collect, convey, and treat that sewage is often not there," Brown said.

Brown said he could not comment on whether or not the water quality would be safe for athletes, as he has not seen hard data from Brazilian authorities.

He doubted that the water would not be compromised given that even if 80 percent of sewage is treated before entering Guanabara Bay, that 20 percent still flowing in is significant from a large city like Rio.

The International Sailing Federation could not be reached for comment on the current state of the bay.

A spokesperson for the State of Rio de Janeiro said the water where the Olympic competition will take place is "suitable for bathing."

"The monitoring of water quality is done monthly by the State Institute of Environment and follows the environmental legislation," the spokesperson told ATR.

"Over the past four years, the points of monitoring of water quality in this area showed annual average within recommended levels by international standards. It should be noted that this area is located in a region where there is greater natural renewal of bay waters, due to the proximity to the ocean."

The spokesperson said that there is "no chance" that the Olympic sailing venue will be moved.

The president of the International Rowing Federation (FISA) Jean-Christophe Rolland tells Around the Rings that the lake where the Olympic regatta will take place is "not polluted."

A source with the rowing federation who is familiar with the Rio 2016 project told ATR, the water quality in the Lagoa needs to be improved and is not aware of any push to fix it.

"Rio has launched a certain number of actions so the Lagoa will have the best quality in terms of the water, and we don’t have any doubt or any concerns on this at the moment," Rolland said to ATR.

Rio 2016 personnel will travel to Lausanne to meet with FISA officials on Feb. 5, where they will give an update on the water quality of the Lagoa and the state of the Olympic project.

Rolland says that the only potential issue for the Lagoa is if heavy rains dump water into the lake. The body is connected to the sea, which can exacerbate the issue and "impact the elements."

"[Rio has] done a certain numbers of actions to ensure that they can monitor and avoid this kind of situation," Rolland said.

"This is something we have to ensure so that the quality of the water will be at [international] standards, but it is not a big of concern. The risk is only in case of specific weather conditions, which [Rio has] addressed."

The Rio 2016 Coordination Commission will meet on Feb. 23-25 to get an update on all aspects of the Olympic project.