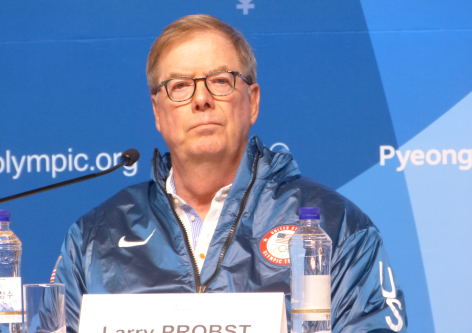 (ATR) Larry Probst announces that he will step down as chair of the United States Olympic Committee at the end of the year.

Probst will be replaced by Suanne Lyons who is a member of the USOC’s board. Lyons served as interim chief executive after Scott Blackmun stepped down earlier this year. Lyons returned to being an independent board member last month when Sarah Hirshland began her four year term as chief executive.

"Serving as chairman of the USOC board of directors has been an extraordinary honor and I’m proud of the work we did during my tenure to support American athletes, and advance the Olympic and Paralympic movements," Probst said in a statement.

"I became chairman at a difficult time for the USOC and worked diligently with my colleagues here in the U.S., and around the world, to change the USOC for the better. It’s now time for a new generation of leaders to confront the challenges facing the organization and I have the utmost confidence in Susanne’s and Sarah’s ability to do just that."

Probst is an IOC member, which is tied to his leadership within the USOC. He also is a member of the Panam Sports executive committee and the Association of National Olympic Committees Executive Council. He will relinquish those positions when he departs the USOC board.

In a statement the USOC said Probst in his two terms "led a transformative period in USOC history" in terms of athlete success and financial growth for the committee.

The United States topped the medal table at the Vancouver, London and Rio Olympics and PyeongChang Paralympics during Probst’s tenure. The USOC also negotiated a new revenue sharing deal with the IOC, which repaired relationships between the two organizations. Probst helped lead efforts which brought the Olympics back to the United States when Los Angeles was awarded the 2028 Summer Games.

The departures of Probst and Blackmun come as the USOC navigates the ongoing sexual abuse crisis in U.S. sport. Probst has never been linked to any of the controversies, and the USOC statement highlighted his leadership in creating the "first-of-its-kind athlete safety program" in the U.S. Center for Safe Sport.

Lyons, as acting chief executive, was compelled by Congress to testify multiple times about the USOC’s response to the scandal. Lyons also chairs the USOC working group addressing issues of athlete safety, which was formed in January in response to the Nassar scandal.