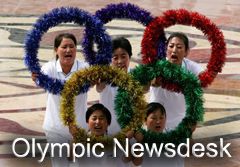 (ATR) The IOC Evaluation Commission for the 2014 Summer Youth Olympic Games will be chaired by Frank Fredericks.

The IOC announced Friday that the four-time Olympic silver medalist and chairman of the IOC Athletes’ Commission will take charge of a 10-member panel.

It will analyse the bids submitted last week by the three candidate cities – Guadalajara, Mexico, Nanjing, China and Poznan, Poland. A report will be submitted to the IOC Executive Board and all IOC members, with the host city vote scheduled for the IOC Session in Vancouver next February.

Singapore is hosting the inaugural summer Youth Olympic Games in August 2010. Two-time Olympic host Innsbruck in Austria stages the first winter edition of the YOG in 2012.

IOC in Talks with French NOC Over TV Channel

The IOC tells Around the Rings it has no immediate concerns over plans by the French Olympic Committee (CNOSF) to launch a dedicated sports channel.

"This project is in discussion and we expect a full presentation in the near future," an IOC spokeswoman told ATR.

"Should this TV channel be launched, it won't affect the French Olympic broadcaster as no Olympic content will be broadcast."

TV rights for the 2010/2012 Olympics in France are with public-service broadcaster France Televisions.

The IOC statement comes in response to plans announced this week by French NOC president Denis Masseglia to launch a sports channel on TNT, whose aim appears to be giving more exposure to less high-profile Olympic sports between Games.

The USOC’s TV channel plans are now on hold amid IOC questions over use of the rings, the Olympic name, and the impact on the value of the rights in the market for the rightholders. The IOC also felt it would eat potential sponsorship for the Games organizers.

The CNOSF’s TV project may yet fall by the wayside if the NOC cannot mount one domestic hurdle. It still needs to win the tender for one of the new channels being launched in 2010 by CSA, the French broadcasting regulator, to push forward with its ambitious plans.

…Beijing gold medalist Evgenia Kanaeva of Russia captured her fifth gold medal at the world rhythmic gymnastics championships in Mie, Japan on Friday. Kanaeva's first golds came on Tuesday when she won the hoop and rope events. On Thursday, she won golds in individual ball and ribbon events.

…The International Canoe Federation (ICF) world slalom championships began Thursday at the 1992 Barcelona Olympics course at La Seu d'Urgell. More than 300 rowers from 55 countries are taking part in the completion that ends on Sunday. Nepal and Uganda, products of the ICF's development program, are fielding teams for the first time.

This coverage is proudly presented by Chicago 2016