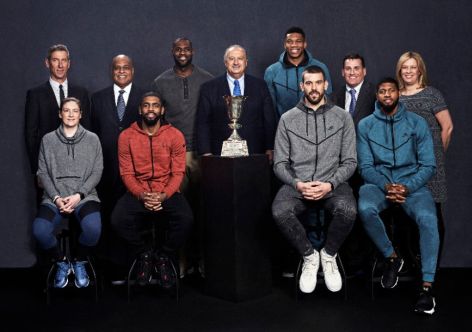 (ATR) One of the top basketball brands in the world is now the official sports apparel company of the International Basketball Federation.

Nike and FIBA agreed to an 11-year deal on Feb. 27 that will extend the highly-recognized sports brand’s collaboration with international basketball. Nike is already a Founding Partner of FIBA’s 3x3 discipline, which is trying to break into the Olympic program.

"This is a memorable day for FIBA as we team up with Nike, THE basketball brand by excellence," FIBA secretary general and IOC member Patrick Baumann said. "We look forward to this long-term partnership and it helping us grow the game globally, thanks to the unrivaled popularity as well as worldwide presence that Nike has to offer."

The deal includes sponsorship rights for Nike at all men’s and women’s FIBA competitions through 2027 including World Cups, Continental Cups and Qualifiers as well as the FIBA Olympic Qualifying Tournament. Nike will also become the title sponsor of FIBA’s World Rankings.

FIBA will utilize the Nike ‘swoosh’ branding on competition courts and across online and in-arena coverage of events. The federation is seeking to capitalize on the Nike brand to help expand the game globally, focusing first on the 2019 FIBA Basketball World Cup scheduled to take place in China.

The Olympic Channel will be collaborating with eight additional sports on content for its network.

The Olympic Channel has now partnered with a total of 49 federations and sports organizations with similar agreements.

"We are excited to work together in our collective efforts to help expand the reach of these sports through the creation and distribution of content to audiences worldwide."

Changes to the rules of golf have been sent to golfers worldwide so they may provide input to the R&A and U.S. Golf Association.

The 24 proposed changes have been whittled down from an original 34 proposals and also edited with shorter sentences and clearer language to make the rules easier to understand.

Among the proposals are the removal of ball moving penalties, relaxed putting green rules, changes to pace of play and relaxed bunker rules.

"Our aim is to make the Rules easier to understand and to apply for all golfers," said R&A executive director of governance David Rickman. "We have looked at every Rule to try to find ways to make them more intuitive and straightforward and we believe we have identified many significant improvements."

The R&A and USGA sent the proposed rule changes on March 1 to begin a six-month period of feedback and evaluation that concludes on Aug. 31, 2017.

The deadline for nominations of candidates for the position was Feb. 24.

Høyerhas led the organization since 2013 and will be following in the footsteps of his predecessor Kang Young-Joong who also held two, four-year terms.

BWF president isn't the only position lacking in drama this year.Current BWF Deputy President Gustavo Salazar Delgado of Peru is also unchallenged for the 2017-2021 term.

BWF Para-Badminton Vice-President Paul Kurzo of Switzerland was also nominated unopposed for his second term. Kurzo is responsible for preparing for badminton's debut at the Tokyo 2020 Paralympic Games.