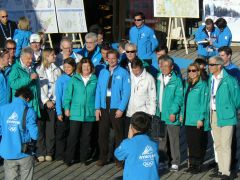 The IOC Evaluation Commission will lend its clearest insight yet into the race for 2018 this week.

After five-days visits to each of the three candidate cities earlier this year, chair Gunilla Lindberg and her 10 colleagues gathered again in March to crystallize their collective thoughts on the strengths and weaknesses of the bids across the 17 themes in the bid books.

Tuesday’s report is the fruit of those efforts as well as the commission’s final say in bidding for 2018.

The intention is to help IOC members gain a better understanding of the concepts they’ll soon be reviewing at next week’s IOC Bid Cities Briefing. Slated for May 18 and 19, it's only the second such meeting of Olympic bids and the IOC membership ahead of a host city vote.

Officials from the three candidate cities will present technical elements of their bids at the gathering in Lausanne, their last chance to impress before the July 6 host vote in Durban.

Check back Tuesday for complete coverage of the report as well as reaction from the candidate cities.

Around the Rings spoke with the Swiss IOC member about the state of women’s ice hockey, whether NHL players will appear at Sochi and preparations for Innsbruck 2012.

The interview comes on the eve of quarterfinal action at the men’s world championship underway in Slovakia. ATR will follow the tournament through to Sunday’s final.

A pair of cities will present bids Wednesday for the 2018 Commonwealth Games.

The race for hosting rights is between Gold Coast, Australia and Hambantota, Sri Lanka.

The Commonwealth Games Federation will receive the pitches in Kuala Lumpur, Malaysia at the end of a six-day series of meetings.

Decision day is Nov. 11 at the CGF’s general assembly in St. Kitts and Nevis.

Around the Rings will be on the scene in Rotterdam for this week’s table tennis world championships.

Play kicked off over the weekend and runs through Sunday. The ITTF will hold its general assembly Tuesday, also in The Netherlands.