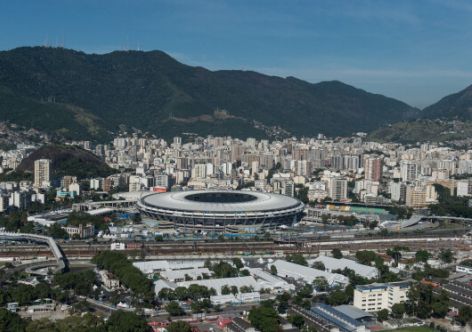 (ATR) No one appears to be operating Rio’s iconic Maracanã Stadium.

Questions over responsibility for the stadium persist, with only a few weeks until the 2017 Rio State Football championship begins. The lack of administration and a blame game in Rio has caused the stadium to fall into quick disarray as the power outages and the summer heat threatens the iconic pitch.

Rio 2016 took control of the stadium in March 2016 as part of Olympic preparations, from the consortium (Maracanã SA) of Odebrecht and AEG, which runs the stadium’s concessions. The stadium hosted the Olympic and Paralympic opening and closing ceremonies along with the men’s and women’s football finals.

After the Games Rio 2016 handed the stadium over to the Rio State government in mid-October. Director of communications Mario Andrada told Around the Rings the organizing committee was still responsible for minor repairs, but there was no set deadline needed for them and the repairs did not impact the day-to-day operation of the stadium.

"We agreed to do [the repairs], but before [doing them] we need to finish paying everybody that we need to pay," Andrada told ATR. "We returned the stadium in much better state than we received it."

As of today, Maracanã SA’s website says in a statement the concessionaire still has not resumed control of the stadium.

"The Maracanã Tour, matches, events and other activities are suspended until the return of the stadium," the statement said.

A spokesperson for Maracanã SA told ATRthat the consortium would not assume control of the stadium until the the "Term of Authorization of Use" with Rio 2016 is completed. The spokesperson said that the consortium has sent a list of TAU "nonconformities" to both Rio 2016 and the Rio State government. Maracanã SA says it is seeking arbitration to resolve the issue to avoid a lawsuit.

"The text of the TAU provides that 'the Rio 2016 Committee shall remain in possession of the Maracanã Complex until it has completed all works of adequacy so that Maracanã and Maracanãzinho return to their original state, even after October 30, 2016,'" a statement from Maracanã SA said.

Maracanã SA is also seeking payment from Rio 2016 for utilities in the stadium from May to December of 2016.

Odebrecht is exploring the possibility of selling its shares in Maracanã SA, which could impact the ongoing dispute and the future of events in the stadium with Rio's big four football clubs. The Maracanã SA spokesperson said that "a commission [has been set up] to analyze the matter, but has not yet formally expressed its opinion."

A Rio state government spokesperson told ATRthat"the responsibility for the operation of the Complex is Maracanã SA" but the government continues to work to resolve the ongoing dispute.

"The State Government will take all legal measures to repair the damage caused to Maracanã during the Olympic Games," the spokesperson said. "It is worth mentioning that the State notified the Rio 2016 Committee on two occasions to resolve the problems."

Earlier today, Brazilian news outlet Globo toured the stadium. Globo reported that lights in the stadium have been out since Dec. 30, parts of the football pitch are filled with dead grass because of the lack of irrigation, and garbage from a charity match held on Dec. 28 has not been cleaned. In addition, seats were missing from the stands, and weeds were found to be growing around the grounds.

After the Olympics, the Maracanã was used by Rio sport clubs C.R. Flamengo and Vasco da Gama to host first and second division football matches. The first of those matches was held on Oct. 23, weeks after Rio 2016 say they relinquished control of the stadium.

Globo reported that Flamengo says the club paid for maintenance of the pitch and stadium cleanup following the Paralympics closing ceremony a month earlier to play the Oct. 23 match. The clubs did not negotiate with Maracanã SA or the state government to host matches, but were allowed to use the stadium.

Flamengo has already secured a potential stadium site ahead of the 2017 season in an ongoing dispute over the current stadium concessionaire. Club president Eduardo Bandeira de Mello has told Brazilian media that if the current consortium or another that wishes to force an unfair contract on the club operates the Maracanã, the club will play matches elsewhere. Last month, Flamengo announced plans to play its matches in a temporary stadium on Ilha do Governador if no solution on the Maracanã is reached. Football club Botafogo used the site in 2016 while Rio 2016 assumed control of the Engenhao for the Games.

Andrada said to ATR that all parties understood the repairs non-essential to the operation of the stadium, and the use of the stadium from October to December should demonstrate that.

"After the Olympic Games, at least three first division football matches took place with no problems whatsoever," Andrada said. "To the world who saw the opening and closing ceremonies and the final of the men’s football tournament: everyone saw the Maracanã in perfect shape."