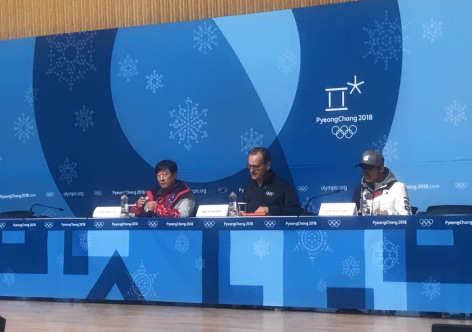 (ATR) The IOC expelled member Adam Pengilly from PyeongChang in an expedited fashion because his admitted impropriety came during the Olympic Games.

Pengilly, an outgoing IOC member on the athletes commission, was confirmed to have left South Korea after an altercation with a PyeongChang 2018 security official. Pengilly is alleged to have dragged the security official and told him he would never work in Korea again, according to a report from the Korea Times. The last day of the IOC Session in PyeongChang on Feb. 25 was to be Pengilly’s final day as an IOC member.

"You can appreciate that this is something going on during the Games and needs to be dealt with immediately, we took very swift action as was the case," IOC spokesperson Mark Adams said at a daily briefing.

"This particular incident, which took place at the Games, with security and volunteers, accepted by Adam Pengilly, and [he] accepted to leave is why we took quick action," Adams added later.

Adams said he could not comment if the IOC Ethics and Compliance officer confirmed reports of a physical altercation. Pengilly, in an interview with the British press, has denied any accusations of the altercation, but Adams confirmed there is CCTV footage of the incident. The IOC did not comment on the contents of the footage during the briefing.

IOC President Thomas Bach made an "unreserved" apology to PyeongChang 2018 President Hee Beom Lee, according to Adams. Pengilly also wrote a letter of apology where he said he was sorry that the volunteer "fell over" when trying to speak with him. There was no mention of any altercation in the letter.

"I’m sorry for running past you when you asked me to stop, I did not know you fell over trying to chase me and hope that you are fine," Pengilly wrote, as quoted by a journalist in the briefing. "I’m also sorry for swearing and I hope you did not misunderstand what I was saying. I made a mistake. My behavior was poor. I wholeheartedly apologize and wish you well in the future."

Pengilly’s expulsion from the Games is the second straight Olympics where an IOC member has run afoul with local authorities. During the 2016 Olympics in Rio de Janeiro, Patrick Hickey -- IOC member in Ireland -- was arrested on ticket touting charges and jailed for a number of days. Hickey eventually was allowed to leave the country on bail for medical reasons, and is awaiting trial. After the incident the IOC reiterated the "presumption of innocence," for Hickey in a number of statements.

Adams said the difference between the cases was the sheer fact Pengilly admitted to wrongdoing in Korea, so actions against him were swiftly taken.

"We presume that because he admits it, there is no presumption of innocence," Adams said.