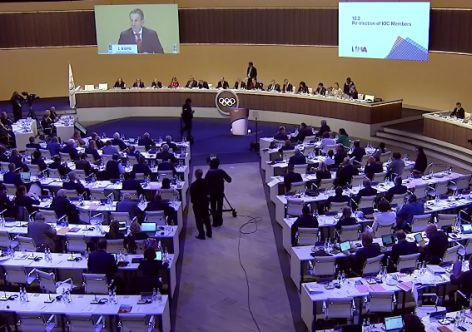 (ATR) Three new Executive Board members and eight new members will help shape the next era of the Olympic Movement.

The International Olympic Committee approved all eight members up for election during the Session in Lima, albeit one short of the original proposal of nine members. President of the Czech Olympic Committee Jiri Kejval was unable to attend the Session and therefore his election to the IOC has been postponed until next year.

"As an issue in Czech sport has arisen, Mr. Kejval explained that he wanted to concentrate on solving this situation and the IOC fully supports his decision," Around the Rings is told.

IOC vice president John Coates then stood down from his position as vice president but was reinstated as an individual member so that he may remain the chairman of the Tokyo 2020 Coordination Commission. This opened the door for United States Olympic Committee Board of Directors member Anita DeFrantz to be elected as the next IOC vice president.

"I can tell you without qualification that I am dedicated to the Olympic Movement, to you all and to making sure the Olympic Movement flourishes," DeFrantz said following her approval to become IOC vice president once more, having served previously from 1997 to 2001.

The election of three new EB members was met with much more fanfare than the rubberstamping of the eight IOC members and IOC vice president. Since former Olympic Council of Ireland president Patrick Hickey’s resignation from the EB last week, a position to represent the NOCs on the EB was open.

Five candidates – Pal Schmitt, Ivan Dibos, Habu Gumel, Nicole Hoevertsz and Denis Oswald – stepped down for the running from this position in favor of the unopposed election of Robin Mitchell.

"It’s amazing what happens in a week in one’s life," Mitchell said following his election. "Before I left for Lima I found out I’m a candidate for the IOC EB. I’d like to thank my colleagues for withdrawing in favor of my candidature. Thank you for the opportunity to share the views of the NOCs in the highest decision making body in Olympic sport."

Mitchell’s approval left the door open for two more positions on the EB to be elected in a host city type vote. The first position on the EB took four rounds, with the eliminations of Dibos, Schmitt and Gumel in the first three rounds before a runoff between Hoevertsz and Oswald. Hoevertsz, an IOC member from Aruba, prevailed in the final vote.

"You have supported a woman from one of the smallest NOCs to become a member of the EB," Hoevertsz said. "I feel very honored and privileged and I promise I will not let you down."

The second EB position was a less contested race, with former EB member Oswald (2000-2012) reclaiming his former position in the second round of voting. The election adds to his IOC remit which currently includes chairing the disciplinary commission investigating the athletes involved in the Russian doping scandal.

"Thanks to all those who have given me their confidence and supported my candidature," Oswald said. "I can assure you I will continue to work in my different capacities with disciplinary commission and any other task I’ll have with the Executive Board."

The elections took place on the final day of an expedited Session in Lima on Sept. 15. IOC president Thomas Bach eliminated the need for another day on Sept. 16 by eschewing the traditional verbal reports of the IOC Commissions.