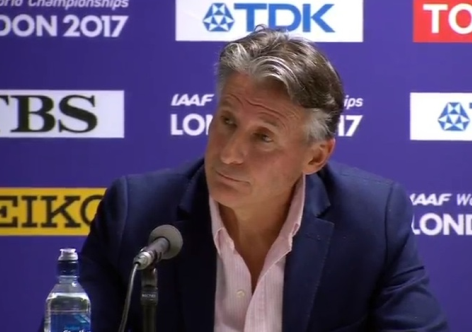 (ATR) Seb Coe says the groundswell of support shown at the London 2017 World Athletics Championships was necessary to restore confidence in the embattled sport.

Coe said there is still "a long way to go," regarding the confidence spectators have on whether athletes are competing cleanly. However, the full houses in London provided the "kind of atmosphere," for athletes to perform at their best and steps shown to continue to restore confidence. Those steps manifested in the progress in lifting the suspension of the Russian Athletics Federation, the reallocation ceremonies, and the performances in London.

"We had a number of neutral athletes I think that shows clear progress in the discussions of the reinstatement of Russia," Coe said. "It is quite possible they will go back with more medals than they did in Beijing [2015] and it also shows not only progress in that direction but a model that has worked really well."

In London a total of 19 Russian athletes were allowed to compete as authorized neutral athletes. Coe said before the 2017 championships that Russia continues to move in the right direction to list the suspension on the Russian Athletics Federation. However, more work needs to be done in acknowledging responsibility for its past doping woes.

Coe says over 700,000 tickets were sold for the event, the largest number of sales for an athletics world championship. London 2017 organizing co-chair Ed Warner said that the resulting crowds showed London "has given its gift" to the sport of athletics.

"I’ve been witnessing a growing confidence in the sport," Coe said. "I believe yes there’s still a long way to go but there is a confidence and people are being proud and seeing to be involved in the sport."

Those packed crowds contributed to the sporting narratives in London, around high profile athletes Justin Gatlin and Usain Bolt.

Bolt, in his final international competition, won bronze in the men’s 100m and injured himself in the men’s 4x100m. It was a downtrodden finish to Bolt’s career that finished with him winning eight Olympic Gold medals and 14 world championship medals.

Bolt lost the 100m to American Justin Gatlin, a controversial sprinter who served a four year doping ban from 2006 to 2010. After winning the 100m early in the championships, Gatlin was booed by the British public. Coe said he never wants to witness an athlete booed after a championship performance, but it was the British public’s right to express themselves.

"Justin was eligible to be here and I’ve explained this was a 17 year history and we witnessed in the stadium the other night, that was only a third of the story," Coe added. "I think the guiding principle for me is simple I would not like to see athletes that have been tested positive in the past walking away winning titles in our sport.

-- Coe says that the 2019 World Championships are not set to be moved from Doha, Qatar. He added that the IAAF will "monitor the political complexities," in the Gulf region, as the federation would do in any region.

-- Format changes could come to the 2019 World Championships, with fewer morning sessions to boost crowd atmosphere. The IAAF competition team is expected to review the number of sessions following the completion of London 2017.