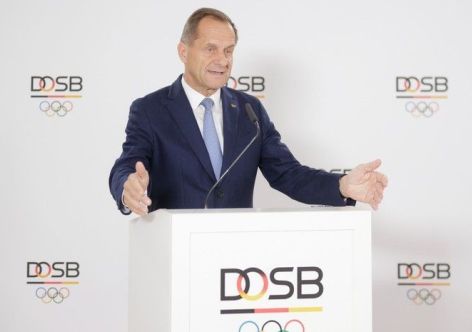 (ATR) Alfons Hörmann ends the drama. The embattled president of the German Olympic Sports Confederation (DOSB)gives in to pressure from organized sports and will not run again in the new elections at the general meeting in December.

This also applies to his "vice" Kaweh Niroomand. This was announced by the DOSB on Wednesday evening.

"In the past seven and a half years, we as a team have given everything to professionalize the DOSB and national sport and to give it a strong voice. We have achieved a lot together," Hörmann said in the DOSB release, "yet I would like to clear the way in December for a new beginning at the top."

Niroomand, vice president for economy and finance, said, "The last few years have been very successful ones for the DOSB, both in terms of sport and economy. In recent weeks, however, it has become clear that the common ground and unity necessary for success no longer exist in parts of German sport. I regret this very much and will make my place free for new minds and ideas."

The acting Presidium will prepare an orderly transition in the coming months and provide the best possible support for the athletes at the Olympic and Paralympic Games in Tokyo. In addition, preparations for the 2022 Winter Games in Beijing will also continue. The same applies to the many tasks in Germany's sport in the area of popular sport, which still needs a team-oriented effort for the time after the pandemic.

It remains to be seen whether other members of the presidium will step down. From top German official Thomas Weikert, president of the International Table Tennis Federation (ITTF), comes relief.

"I think if you have held on too long, got caught up in inconsistencies and the relationship with the IOC is shattered, then it is only the consequence that you do not run again as president," he said. The basic trust in Hörmann had been "shaken by the findings of the Ethics Commission," according to Weikert.

The DOSB must now quickly regain the trust it has lost. In the affair surrounding Hörmann, who was accused of lacking leadership qualities ("culture of fear") in an anonymous letter presumably from the DOSB staff, the ethics commission under the chairmanship of former Federal Minister of the Interior Thomas de Maiziere had on June 7 recommended new elections in December.

This was intended to restore confidence as quickly as possible following the allegations about conditions in the governing body of German sport. But three days later, the DOSB surprisingly announced that it would initially only hold a vote of confidence after the Tokyo Paralympics in September.

This announcement, just a few weeks before the Tokyo Olympics, had caused anger and criticism in large parts of German sports. Thus, the LSB's, the athletes and also Dagmar Freitag, the chairwoman of the Sports Committee of the Bundestag, unequivocally called on the DOSB to follow the recommendation of the ethics commission.

The SPD politician even suspected "ice-cold calculation" behind the alleged delaying tactics. DOSB Executive Board member Jonathan Koch also distanced himself from the planned actions of his colleagues. Koch, who is unlikely to resign, said he was "very concerned about the damage to credibility and the functioning of the entire management and control structure of the umbrella organization of German sports".

The fronts seemed to have hardened, and the image of the DOSB was particularly damaged. It was only when external criticism became louder and louder that the resistance of the top sports associations crumbled more and more. In the most recent consultations of all parties involved, it became clear that there was no way around new elections.

Hörmann has led the DOSB since December 2013 as its third president, following the current IOC head Thomas Bach and interim head Hans-Peter Krämer.

Written and reported by Piet Kreuzer