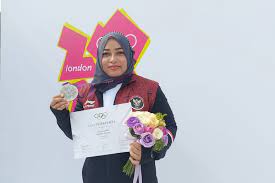 Better late than never is likely how Indonesian weightlifter Citra Febrianti is feeling after finally receiving her silver medal from the London 2012 Olympic Games.

Febrianti competed in London taking part in the women’s 53kg event. The total score in the event was the sum of the lifter’s highest weight lifted in the snatch and clean and jerk. The lifters received three attempts at each. At that time, she recorded a total lift of 206kg; the result of a 91kg snatch and 115kg clean and jerk.

The original gold medalist, Zulfiya Chinshanlo, of Kazakhstan was disqualified from the London Games on October 27, 2016, and her medal, results and records were stripped. Chinshanlo tested positive for performance enhancing drugs which allowed each lifter to move up a medal spot. The process of reallocating those medals takes a long time which meant Febrianti had to be patient.

Originally Febrianti, who finished in fourth place just off the medal stand, believed she would be receiving a bronze medal, but Cristina Iovu of Moldova was also disqualified and stripped of her bronze medal due to doping. In just two months, Febrianti went from not medaling in London to being the silver medalist in her event. 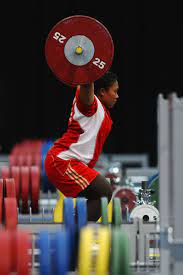 Following the announcement of both the gold and silver medalists being stripped, the Indonesian sports stakeholders got to work fighting for Febrianti to receive not only her rightful place on the podium, but also her medal-winning bonus.

“Of course this is a big milestone for our sport. So after receiving the IOC letter, we immediately coordinated with the Ministry of Youth and Sports so that Citra was also entitled to a bonus and grateful, the bonus had been received worth Rp. 400 million (equivalent to $26,500 USD) in December 2020,” Chairman of the Indonesian Sports Committee (KOI/NOC Indonesia) Raja Sapta Oktohari said during her medal ceremony.

With tears in her eyes, Febrianti thanked the KOI for submitting the report to have the medal reallocated as well as the bonus she received. “The struggle was not enough in 2012. There was still another struggle to get this medal, for 10 years. I am very grateful,” said Febrianti.

It turns out, that despite the 10 years between London now, victory still tastes just as sweet on top of the podium.