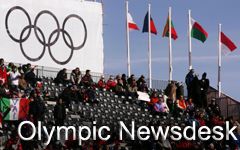 “Organized sport has a unique and important role in society. By working together, we can improve our ability to bring the benefits of sport to the European Union and find more effective ways to combat doping, illegal betting and other threats to sport,” he said following the Monday summit in Brussels, Belgium.

The meeting allowed for an exchange of views on topics currently on the EU agenda for sport. They include: financing of sport; the fight against doping; the implementation of the White Paper on Sport and the launch of preparatory action in sport financed from this year's EU budget.

Also discussed were next steps to continue dialogue with the sport movement, in view of the next EU Sport Forum to be held in April 2010 and of the possible entry into force of the sport provisions of the Lisbon Treaty.

Nine members of the Olympic Movement were also involved in the meeting with Figel and his team.

The meeting was a follow-up to one organized in Lausanne in January. Rogge and Figel, together with other representatives of the Olympic Movement, discussed issues such as the autonomy of sport, betting concerns, the application of EU competition law and of free Moscow has been selected as the host of the 2010 European Youth Olympic Games trials. (Getty Images) movement principles in sport, and the fight against doping.

Figel said he was pleased “the positive spirit of cooperation created in Lausanne at the beginning of the year continues to shape the dialogue between the commission and the sport movement.”

This year’s two summits bringing together Olympic stakeholders and EU officials come in the wake of the European Council Declaration on Sport announced in December, 2008. This called for the strengthening of dialogue between EU heads of state and Government, the IOC and representatives of the world of sport.

Young European athletes hoping to compete at the 2010 Youth Olympic Games in Singapore must travel through Moscow first as the Russian capital was selected to host the European Olympic Youth Trials in May, 2010.

"I am extremely happy and honored that the city of Moscow will be hosting such an important event, where the best young athletes in Europe can come together to follow their dreams of competing in such a prestigious competition as the Youth Olympic Games," Moscow mayor Yuri Luzhkov said.

European Athletics President Hansjörg Wirz said, "We believe Moscow will put on a fantastic competition and I am looking forward to seeing the best of Europe's youth athletes competing for a place in the Youth Olympic Games."

…The New Zealand Olympic Committee (NZOC) is searching for 21 athletes to take part in the celebrations of its 100th anniversary. NZOC has found 976 out of 1111 Olympians who competed between 1964 and 2004. A total of 114 have died and the remaining 21 Olympians have yet to be found.

…The Bahrain Olympic Committee has a new executive board, joining recently elected BOC chief Shaikh Nasser bin Hamad Al Khalifa. According to local media, 11 sports leaders were running for the seven open slots on the board, with presidents of the basketball, cycling, football, handball, weightlifting and bodybuilding federations, along with two other individuals, earning a seat on the board.

National Public Radio aired its second look at the construction challenges for the Sochi Olympics.

The Washington Times continues its second round of predictions of rosters for Olympic hockey teams.

Written by Written by Mark Bisson and Ed Hula III