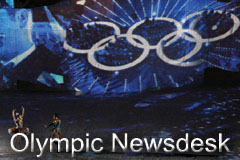 The IOC holds its first meeting with organizers of the 2018 Winter Olympics, less than 24 hours after the South Korean city won the Games.

IOC Olympic Games Executive Director Gilbert Felli says he met with PyeongChang leaders Thursday afternoon to review the first steps to be taken on the road to the Winter Olympics six-and-a-half years away.

"We’re going to have an initial seminar in PyeongChang by the end of August. So we described what we intend to do in this meeting. And we also underlined to them the different risks coming out of the report of the Evaluation Commission, where we have to focus at the beginning of Games preparations," said Felli at a briefing at the IOC Session in Durban.

Actually, the IOC report identified few risks with the PyeongChang bid. The report did raise questions about possible issues with crowding around venues that might affect access and movement of spectators.

Still to come in the next few weeks from the IOC is the naming of the Coordination Commission that will follow the preparation for the Games with regular visits to the new host city.

Mexico’s government vows to protect athletes when they arrive in Guadalajara for the Pan American Games, now just 100 days away.

The consul general of Mexico in Toronto opened a countdown event Wednesday in the provincial capital, also host of the 2015 Pan Ams, by insisting the drug violence that’s plagued Mexico for years will not impact the competition.

"This violence related with the drug lords, it's a severe problem, but it will not affect the Games," Mauricio Toussaint was quoted by Canadian media.

Games safety has long been a chief cause of distress for organizers, even more so in the past few months. The host city was largely free from the worst of the violence until gangs threw grenades at Guadalajara police in February, setting off considerable concern among participating NOC delegations.

With 36 sports on the program, Guadalajara 2011 is poised to be the largest multi-discipline event of the year as well as a qualifier for 15 of the 26 sports on the London Olympic program.

Archery simply refuses to take a breather during the IOC Session in Durban.

As the rest of the Olympic Movement focuses on South Africa, the sport is keeping quite busy elsewhere.

Its international federation announced over the weekend a name change coming out of its congress in Turin. FITA, an acronym for Fédération Internationale de Tir à l’Arc, will now be known as the World Archery Federation, or WA for short.

Six hundred archers from nearly 90 countries are letting their arrows fly at a pair of venues dating back to the Renaissance.

Palazzina di Caccia di Stupinigi staged the qualification and elimination rounds, and Piazza Castello is the site for this weekend’s finals, due to be streamed live on a special web channel.

Events run through Sunday, at which point the para-archery world champs begin.

The Russian Olympic Committee and Association of National Olympic Committees of Africa signed a Memorandum of Understanding on Thursday, "enshrining long-term friendship and future collaboration" according to a statement.

Alexander Zhukov, ROC president and Lassana Palenfo, his counterpart at ANOCA signed the deal at the IOC Session in Durban, South Africa on Thursday.

"We are very happy to have signed this MOU with such an effective and influential NOC" Palenfo said. "We are about to launch the first ever ANOCA Games and the second edition of the Africa Youth Games. We very much hope to welcome Russia to these African events. Russia is an important market in terms of sport development for Africa, especially with Sochi 2014 fast approaching."

"Helping to develop the African market is an import part of our goal to increase participation in sport all over the world" Zhukov said. "I hope that the ROC’s experience and expertise can have a powerful, positive effect in Africa and I am sure we will learn some valuable lessons from ANOCA about promoting sport in developing countries."