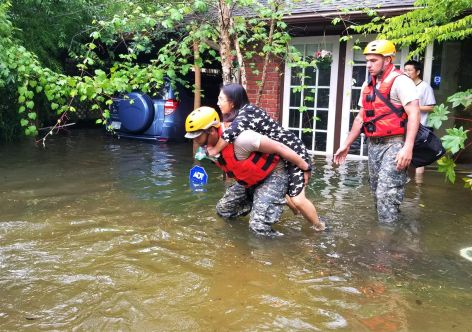 (ATR) All major sports in Houston, Texas have been relocated due to the devastating flooding from Hurricane Harvey that has displaced thousands of residents.

Professional as well as collegiate sports teams have moved their games across the United States to avoid the 100 trillion gallons of water that have fallen on the coastal city in the past week.

Reports out of Houston suggest that the professional sports venues – including the Houston Texans NRG Stadium that hosted the Super Bowl, Houston Astros Minute Maid Park, Houston Rockets Toyota Center and Houston Dynamo and Dash’s BBVA Compass Stadium – are intact and have not sustained flood damage although there is flooding on nearby streets.

While the venues remain damage free, the leagues that host games there have wisely moved the scheduled events to prevent any increased traffic in the flooded area and avoid danger to attendees.

The preseason NFL game between the Houston Texans and Dallas Cowboys has been moved north to Arlington where the Cowboys play.

The Houston Astros three-game series against cross-state rivals Texas Rangers has been relocated to the Tampa Bay Rays’ Tropicana Field in Florida. The Rangers had sought to host the game at their stadium, Globe Life Park, in Arlington but was denied by Major League Baseball after the Astros rebuked the request.

The Houston Dynamo and Dash football teams were scheduled to play matches against Sporting Kansas City and North Carolina Courage on Aug. 26 and Aug. 27, respectively. These matches were postponed with the Dynamo match rescheduled for Oct. 11 and the Dash match yet to have a finalized date. All tickets for the game will be valid for the unscheduled changes.

The college gridiron football AdvoCare Texas Kickoff game between Louisiana State University and Brigham Young University is being moved to a stadium that has experience in disaster relief. The New Orleans Mercedes-Benz Superdome was a refugee relief center during Hurricane Katrina in 2005 and is hosting the college gridiron football game originally planned for the Texans’ NRG Stadium.

The George Brown Convention Center is quickly becoming a center for disaster relief during the storm, welcoming those who have been displaced by the flooding, much like the Superdome in 2005. However, the venue – which hosted the 2015 World Weightlifting Championships – has not sustained significant damage as the Superdome did during Katrina and is reportedly well-stocked with supplies. The venue has a capacity of 5,000 but reports suggest they plan to host up to 9,000 people until the hurricane subsides.

"Our thoughts and prayers go out to people, cities and towns who have been and continue to be impacted by Hurricane Harvey and its aftermath," a USA Gymnastics spokesperson tells ATR. "The spirit and resourcefulness of those who have been evacuated and the individuals who have aided in recovery efforts are inspiring.

"The USA Gymnastics National Team Training Center hosted an educational course late last week and everyone departed safely. Luckily, there has been minimal impact at the NTTC, and clean up can begin once the rain ceases and road closures are lifted."

This is not the first instance that flooding has had a major impact on sports in Houston. In 2015, fans at a Houston Rockets game at the Toyota Center had to remain in the venue overnight as flash floods prevented a safe return home for attendees.

In 2002, ATR Editor Ed Hula was in Houston during the 2002 visit by the United States Olympic Committee task force for the 2012 Summer Olympics. As Hula and the USOC prepared to leave the city and travel to the next stop of San Francisco, a flash flood shut down the airport and forced the group to overnight at a hotel until the airport reopened the next day.