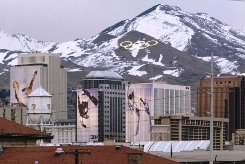 (ATR) An IOC Executive Board member tells Around the Rings a letter he wrote in 1991 about Salt Lake City’s Olympic bid is "old news, no news".

The letter from Patrick Hickey to ex-Salt Lake City bid chief Tom Welch unearthed this week reported that organizers of the Nagano bid for the 1998 Winter Games were spending $100,000 per IOC member to secure their support at the 1991 IOC Session.

Hickey wrote the letter in his capacity as president of the Olympic Council of Ireland. He would not become an IOC member until 1995. Hickey, who is still OCI president, was elected to the IOC EB in July at the Session in London.

While Hickey dishes dirt on the Nagano bid and offers incorrect predictions on the IOC vote, the letter appears to contain no evidence of wrongdoing on his part.

Still, Hickey tells ATR that in hindsight, he regrets that the letter was written.

In the letter, he mentions that he had heard "some stories regarding the fact that certain IOC members have entered into a contract with Nagano to vote for them for a fee of $100,000".

A copy of the letter and a reply by Welch was released this week by Andrew Jennings on his "Transparency in Sport" website.

The header on the copy indicates that it came from a fax machine identified as the Associated Press with a Salt Lake City phone number, transmitted on Jan 5, 2001.

It's one of thousands of documents from the Salt Lake City Olympics unearthed during multiple inquiries arising from the vote-buying scandal more than a decade ago. Hickey was never implicated in the scandal.

In the letter, Hickey reports comments from Mario Pescante, then president of the Italian NOC and a leader of the 1998 Winter bid from Aosta. He says Pescante told him that Aosta, if eliminated in the 1991 IOC vote, would support Salt Lake City.

The two cities actually tied with 15 votes in the first ballot and were pitted against each other for elimination. Salt Lake City easily won that extra vote. Hickey predicted to Welch that the support from Aosta "should absolutely clinch it for you".

Nagano edged Salt Lake City in the fourth round of IOC voting at the 1991 IOC Session. It would be another four years before Salt Lake City would win the vote to host the 2002 Games.

In a letter to Hickey, Welch thanks him for the observations from Pescante, calling them "most enlightening, and hopefully, their observations will be shared throughout the Olympic family". Welch does not mention the claims about cash paid to IOC members.

While an interesting artifact from the inquiry into the vote-buying scandal involving Salt Lake City (as well as Nagano and other bids), the letter from Hickey does not appear to reveal new allegations.

Whether Hickey should have reported word of the bribes to the IOC is another question. At that time, the IOC had no mechanism to deal with such allegations. The IOC Ethics Commission and stringent rules to bar vote-buying did not come into force until 1999, eight years after the letter was written.

The letter from Hickey emerges in the article by Jennings only after delivering broadsides against the Irish sports leader for supposed links to Belarus head of state Alexander Lukashenko.

Notorious for allegations he encourages human rights abuses in Belarus, Lukashenko is also president of the Belarus NOC.

Hickey says an award he presented to Lukashenko in 2005 was one voted upon by the European Olympic Committees, of which Hickey is the president. Hickey tells ATR the award was for Lukashenko’s contribution to the NOC and had no connection with his controversial leadership of Belarus.

Jennings, in his hyperbolic style, correctly points out repeated doping offenses for Belarus athletes at the Olympics under Lukashenko’s watch. The only gold medal stripped at the London Olympics was taken from the female shotputter from Belarus.

Written and reported by Ed Hula.