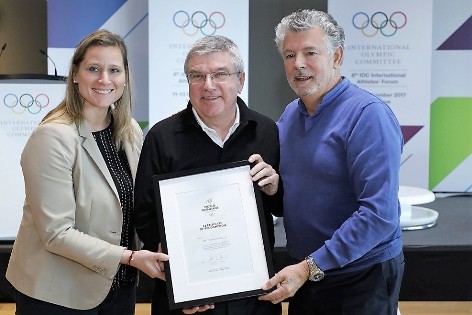 (ATR) Olympians can add three letters to their names: OLY.

The designation of OLY as a post-nominal for those who have competed at either Summer or Winter Olympics was unveiled Saturday at the IOC Athletes Forum in Lausanne.

The initiative is organized by the World Olympians Association, the group representing athletes who have competed at the Games, approximately 120,000 worldwide.

"It’s time to recognize becoming an Olympian is like becoming a Phd. It takes 10 years," WOA President Joel Bouzou tells Around the Rings in Lausanne.

"You learn about perseverance, you learn about equity, fair play. Your are an example of this for society at large," says Bouzou.

The IOC President, a gold medal fencer, is the first to use the designation. Thomas Bach OLY was on hand at the open of the Athletes Forum to launch the honorific Saturday morning. Athletes Commission chair Angela Ruggiero received the second certificate issued by the WOA.

Olympians apply to the WOA for the certificate that allows use of the OLY lettering on any official documentation. Information on how to proceed is available at the website for the WOA, www.olympians.org.

An email address under the domain of Olympians.org also comeswith the certificate.

"It will empower them. It will help them with their future lives," says Bouzou.

Bouzou says good conduct, honorable behavior is a must for continued use of the title.

"If people break the rules, they are not allowed to carry it. Once an Olympian, always an Olympian in life. But those who carry OLY on the side of their name are role models. That is what we want to promote, that is what the IOC approved," says Bouzou, a modern pentathlete when he competed at the Olympics.

Bozou says the next big initiative for the WOA will be aimed at developing National Olympic Associations around the globe. Some countries have established associations, many have not.

"We’ll be working with NOCs and the athletes commissions of those NOCs," says Bouzou.

A mentoring program for athletes transitioning to a post-Olympic career is another important WOA initiative says Bouzou.

Bouzou says the health of Olympians after competition is another growing interest of the WOA.

"A lot of research and science has been done to enhance performances. It’s good to do the same to enhance health," he says.

Around the Rings is the official media partner of the World Olympians Association.

With reprting in Lausanne by Ed Hula III.