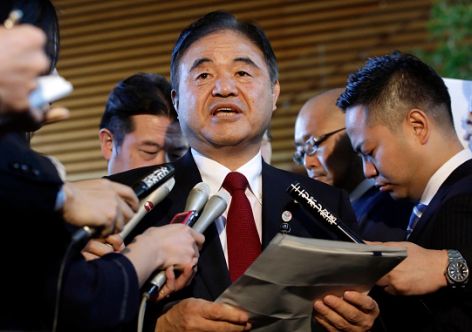 Minister in charge of the 2020 Tokyo Olympics Toshiaki Endo speaks with media after a meeting of Cabinet ministers including Japan's Prime Minister Shinzo Abe, on a new national stadium construction plan for the 2020 Tokyo Olympics at Abe's official residence in Tokyo on December 22, 2015. Japan on December 22 chose a new 2020 Olympic Stadium design, after an earlier version set off a row over a 2 billion USD price tag that would have made it the world's most expensive sports venue. AFP PHOTO / POOL / Eugene Hoshiko / AFP / POOL / EUGENE HOSHIKO (Photo credit should read EUGENE HOSHIKO/AFP/Getty Images)

(ATR) Japan’s Olympics minister Toshiaki Endo admits he accepted gifts from a teaching agency but says he did nothing wrong.

The Japanese daily Mainichi newspaper alleged the Tokyo 2020 minister received cash payments from a teacher dispatch agency during a time when Endo was leading reforms to Japan’s English education program.

Mainichi claims Endo received $81,000 during the time he lobbied for the increased use of assistant language teachers, an initiative the teaching agency also supported.

Endo told Lower House Budget Committee members on Thursday that these claims are "erroneous" and that "the article is wrong and deeply regrettable", despite admitting to receiving the cash and gift vouchers from the agency’s founder.

Endo says his lobbying efforts were not repayment to the teaching agency and that the subsidies agreed upon by the ministry did not cover the company in question.

Endo believes he is in the clear because he correctly filed the transaction in his political funding report. Japanese Prime Minister Shinzo Abe offered support to the embattled minister.

A Japanese legal expert says he does not expect an indictment to arise from the allegations but admits Endo is not completely in the clear.

"His morality, however, will be called into question," Nihon University professor Tomoaki Iwai says.

The Japan Sports Association is moving its headquarters to be closer to the new National Stadium ahead of the Tokyo 2020 Olympics.

The JSA will move out of Kishi Memorial Hall built for the last Olympics in Tokyo in 1964. The new 14-story building is expected to be completed in 2019 and will house the JSA, the Japanese Olympic Committee and a museum dedicated to the history of the Olympics.

Plans for the museum were released on Feb. 2. The museum will be located on the bottom two floors of the building and is expected to cost $85.5 million. The JSA and JOC will share the cost of construction.

Construction on the project will begin in the summer of 2017 and has an estimated Spring 2019 completion date.