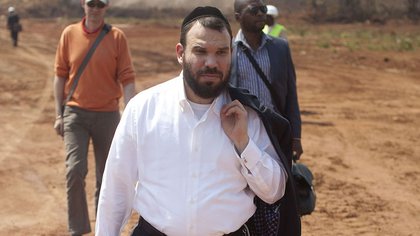 Dan Gertler at the Mutanda copper and cobalt mine in the Democratic Republic of Congo in August 2012.

(Bloomberg) -- Sanctioned Israeli billionaire Dan Gertler can once again access the U.S. financial system after the Treasury Department approved an authorization in the waning days of the Trump administration.

The U.S. sanctioned Gertler and his companies in 2017 for allegedly corrupt mining and oil deals in the Democratic Republic of Congo, one of the world’s poorest countries. At the time, the Treasury said Gertler worked as a middleman between multinational companies and the Congolese state and on behalf of former President Joseph Kabila.

The license, signed Jan. 15, will allow Gertler and his companies to resume business at least until the license expires on Jan. 31, 2022. It was authorized by Andrea Gacki, a long-time civil servant who is the director of Office of Foreign Assets Control, according to a copy posted by the New York Times, which reported on the move Sunday.

“Mr. Gertler is grateful to OFAC for issuing a license that will enable him to operate his businesses and philanthropic activities,” a spokesman for Gertler said in an emailed statement Monday. “He welcomes the reporting requirements and with the oversight of a distinguished compliance team, looks forward to demonstrating that all of his activities fully comply with the letter and the spirit of the OFAC license and the law.”

The reprieve allows “one of the world’s most corrupt tycoons to largely walk free and do business at U.S. banks,” Sasha Lezhnev, deputy director of policy at the Washington D.C.-based anti-corruption group The Sentry said by text message. “The Biden administration should immediately reverse the decision and revoke the license for Gertler and his corporate empire, as the sanctions already had a wave of impact on corruption in the DR Congo.”

“We are aware of this action taken by the previous administration,” said Treasury spokesman Calvin Mitchell, declining further comment.