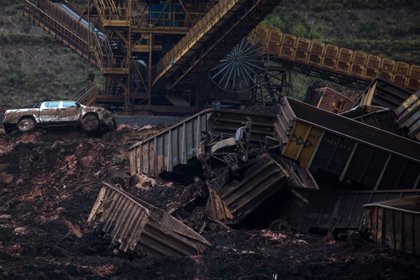 Bloomberg Best of the Year 2019: A pick up truck sits among shattered debris after a dam breach at the Vale SA iron ore mine in Brumadinho, Minas Gerais state, Brazil, on Saturday, Jan. 26, 2019.

(Bloomberg) -- The difference between what Brazil’s Vale SA is offering as compensation for the Brumadinho dam disaster and what the state government of Minas Gerais is seeking narrowed to 11 billion reais ($2 billion) before talks broke down on Thursday, according to a person briefed on the matter.

The Minas Gerais government reduced its demands to 40 billion reais from 54 billion reais previously, said the person, who asked not to be identified as the negotiations were private.

Vale offered 29 billion reais, and the talks ended after both sides failed to come to an agreement, the person said. Vale initially offered 21 billion reais. The company has been given a week to come up with a new offer before the case reverts back to court. The revised offer and demand were reported earlier by Reuters.