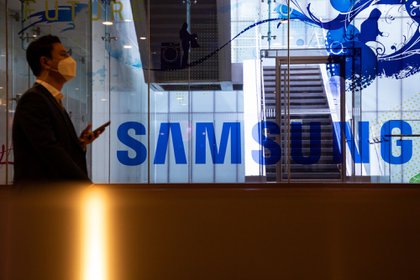 A man wearing a protective mask walks past the Samsung Electronics Co. signage at the company's D'light flagship store in Seoul, South Korea, on Tuesday, Oct. 6, 2020. Samsung were among a list of global firms that were cleared by Indias Ministry of Electronics and Information Technology that won approval to manufacture products in India under a plan aimed at attracting investment of more than 10.5 trillion rupees ($143 billion) for mobile-phone production over the next five years. Photographer: SeongJoon Cho/Bloomberg

(Bloomberg) -- Samsung Electronics Co. can’t use a Chinese court ruling to block an American court from determining royalty rates on Samsung and Ericsson patents, a federal judge in Texas ruled Monday, in a closely watched case over global royalty disputes.

District Court Judge Rodney Gilstrap said he has the right to determine if Samsung and Ericsson are fulfilling their obligations to license their standard-essential patents on fair terms. He barred Samsung from enforcing a ruling that limited Ericsson’s ability to pursue its case.

Ericsson, based in Sweden, filed suit against Samsung last month in Texas, accusing it of refusing to negotiate in good faith so Samsung could demand a less-than-fair rate on Ericsson’s patents. Days earlier, South Korea-based Samsung had filed its own complaint in Wuhan, China, asking the court there to set a global rate for Ericsson’s patents.

Courts around the world have historically issued rulings that would only affect activity within their borders. When it comes to royalty disputes between multinational companies, that’s led to forum shopping around the globe, with each side hoping a court in one jurisdiction would issue a ruling that would give it an edge in negotiations. That’s what happened before Ericsson and Samsung reached a 2014 cross-licensing agreement that they are struggling to renegotiate.

In August, Britain’s highest court ruled that U.K. judges had the authority to set global patent rates when it comes to technology that’s fundamental to an industry standard. The gamesmanship has led to companies asking a court in one country to block their rival’s litigation in another country. Ericsson wants a U.S. court known for being friendly to patent owners to be the main decider, while Samsung’s choice of court has a reputation for setting low royalty rates.

Samsung on Dec. 25 obtained an order from the Chinese court that Ericsson was barred from seeking royalties on 4G or 5G technologies anywhere other than in Wuhan. Gilstrap’s order prevents Samsung from enforcing that order and mandates that the Korean company pay any fines levied against Ericsson by the Chinese court.

Gilstrap said the cases aren’t exactly the same and both can proceed. The Chinese court barred Ericsson from blocking use of its 4G and 5G patents anywhere in the world. Gilstrap noted that Samsung has filed a patent-infringement complaint against Ericsson at the International Trade Commission, seeking to block imports of Ericsson’s base stations into the U.S.

“It would be the height of inequity (and hypocrisy)” to let Samsung proceed with efforts to block Ericsson products, the judge ruled.

“This Court should not allow Samsung to impose financial penalties against Ericsson for attempting to file the same claims that Samsung itself has filed without a counterbalance,” Gilstrap said. “The issues present before this Court, the Wuhan Court, the United States International Trade Commission, and elsewhere should be resolved on the merits and not based on unfair economic leverage gained through litigious gamesmanship. Equity demands no less.”

The U.S. cases are Ericsson v. Samsung, 20-380 and 21-1, both U.S. District Court for the Eastern District of Texas (Marshall). The ITC case are In the Matter of Certain Electronic Devices with Wireless Connectivity, 337-3520, and Matter of Certain Wireless Communications Equipment, 337-3522 U.S. International Trade Commission (Washington).