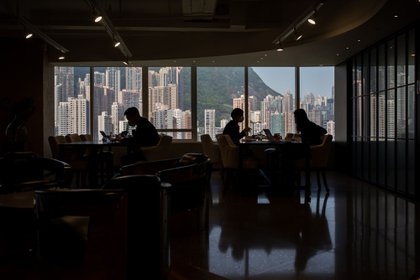 People sit with their laptop computers in a shared workspace at the Executive Centre co-working office space in Hong Kong, China, on Thursday, April 16, 2020. Whether escaping tiny apartments that aren't conducive to work, or less concerned by a virus that has infected around 1,000 residents compared to more than 110,000 New Yorkers, the surprise result is co-working providers are thriving in Hong Kong, even as much of the world remains in lockdown. Photographer: Paul Yeung/Bloomberg

(Bloomberg) -- The editor of a pro-democracy website in Hong Kong accused internet service providers of cooperating with government agencies to block access to its content, saying they were restricting “citizens’ rights and freedom to access information.”

In an online statement accessed by Bloomberg News outside of Hong Kong, the chief editor of HKChronicles.com said users located inside the city had informed her of problems connecting to the website since January 6, 2021. She said there was a misconception the publication was blocking its own users from the site.

“We never prevent users from accessing our website based on their location or Internet Service Provider and we are not planning to do so in the future,” Naomi Chan said in the statement.

Instead, Chan wrote, “we found that some ISPs of Hong Kong ... deliberately dropped any connection to our servers.”

“Based on reports from users, the ISPs that had participated in the blocking of our website includes Smartone, CMHK, HKBN and PCCW,” the statement said.

PCCW Ltd. declined to comment on the report, while SmarTone Telecommunications Holdings Ltd., HKBN Ltd. and China Mobile Hong Kong, a subsidiary of China Mobile Ltd., did not immediately respond to requests for comment.

Neither the Hong Kong government or police immediately responded to emails seeking comment on Monday morning.

Ming Pao reported that Hong Kong police declined to comment on individual cases, but the authorities cited Article 43 of the National Security Law, which states the officers can order service providers to block access to electronic information deemed likely to constitute a crime endangering national security.

The introduction of the national security law last year raised concerns among Hong Kong’s internet users that the Chinese government would cut the free flow of information the city has long enjoyed.

The suite of legislation includes guidance that allows police to ask technology and telecommunications companies to delete or restrict access to information, and there are limited options for companies to resist those requests.

Hours after the law was introduced big tech firms, including Microsoft Corp. and Zoom Video Communications Inc., suspended requests for data from the Hong Kong government.

Along with condemning the severing of access to her website, Naomi Chan used her statement to users to “advise Hong Kongers to make early preparations to counter future Internet blockage at a larger scale, and to face the darkness before the dawn.”