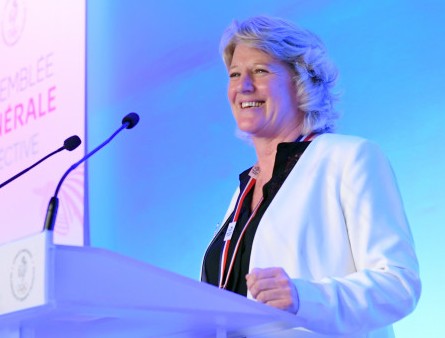 Brigitte Henriques was elected June 29 for a four-year term as CNOSF president. (CNOSF)

(ATR) For the first time in its 125-year history, a woman now leads the French NOC.

The election of Brigitte Henriques last week is not only a triumph for the 50-year-old football leader. It’s also the latest manifestation of women taking charge at the national level for the Olympics around the world.

Henriques was elected in the first round of voting. Three other candidates were in the running, two men and a woman. She succeeds Denis Masseglia, who at 75 has reached the age limit to hold office. Masseglia served since 2009.

Henriques’ 58 percent majority is clearly a testament to her labors in the vineyard of French sport – football in particular. A striker in her days as an elite player on the national team, Henriques went on to coach before becoming a sports administrator. She’s been active with the CNOSF in a number of roles, most recently heading the committee’s work to encourage diversity and inclusion.

“I will be the spokesperson for all sports, all federations, all CNOSF members, in their great diversity and richness,” Henriques told the general assembly.

Her six-point plan includes support for the elite and grassroots sports clubs at the heart of sport in France.

Henriques says she’ll carry the French flag internationally as the NOC representative. And she vows to make the most of the rapidly approaching 2024 Summer Olympics in Paris. It won’t be just the French team stepping into the spotlight for those Games – Henriques will be front and center as well. As NOC president in a country hosting the Games, her international profile should rise quickly in the next three years.

It’s likely that she will be nominated for a seat on the IOC in 2024, assuming all goes well between now and the end of the Paris Olympics.

While it might be a novelty for a woman to take the helm of the CNOSF, there is a certain inevitability -- not just in France, but worldwide. IOC records from 1992 show just seven women listed as presidents of NOCs out of the 169 existing at the time. That’s less than five percent.

Today, nearly 20 of the current 206 NOCs are led by women. While that is a three-fold improvement, it is still less than 10 percent of the total.

If it is a struggle to bring up the numbers for women in the leadership of Olympic sport, the NOCs seem an easier path than the international sports federations. Of the 41 summer and winter federations on the Olympic program, just two are led by females.

Regardless of their low proportion compared to males, Matlohang Moiloa-Ramoqopo, Lesotho NOC President. (ATR-Sheila Hula)the club of female NOC presidents includes some of the biggest and most powerful organizations.

Six current NOC presidents are in office in the Americas. That is the most of any region.

In the U.S., women are in both top positions of the U.S. Olympic and Paralympic Committee. Susanne Lyons is president and Sara Hirshland is CEO. Canada is led by Tricia Smith. Sara Rosario heads the Puerto Rico NOC and in Mexico vice president Jimena Saldana could be poised to take charge.

With Henriques heading France, Europe now has five female NOC chiefs. Sarah Keane heads the Olympic Federation of Ireland; high jump great Stefka Kostadinova leads Bulgaria. The Norwegian NOC is led by Berit Kjoll, while Lithuania is captained by Daina Gudzineviciute. She is also the only one of the group on the IOC.

In Africa, four women are NOC presidents as well as IOC members. Burundi’s Lydia Nsekera and Aicha Garad Ali are both rising in seniority after nearly 10 years on the IOC. (Nsekera and Garad Ali are now senior IOC members as well). Filomena Flores heads the Cape Verde NOC and Matlohang Moiloa-Ramoqopo is in a second term as president of the Lesotho NOC.

If there is an inevitability to more women leading the world’s NOCs, keep an eye out for some potential moves within the next year. While NOCs customarily hold elections after an Olympic Games, the postponement of the Tokyo Olympics has meant delays. They will now come in waves post-Tokyo.

Germany is heading for a new president and more than one woman is eyeing the post. In Japan the crisis over the postponement of the Tokyo Olympics has resulted in the sudden rise of women taking the lead. Don’t be surprised to see one of them take over the Japanese Olympic Committee following the Games.

Change is coming to Australia when John Coates retires after more than 30 years as president of the Australian Olympic Committee. He won re-election to a final term after a heated contest with a female challenger, the first time he’s had an opponent.

The biggest prize -- presidency of the 206-member Association of National Olympic Committees -- is coming up for a vote later this year. Sheikh Ahmad Al-Sabah, elected in 2015, suspended himself in 2018 to tend to a never-ending legal morass linked to Kuwaiti politics and not the Olympics. Vice President Robin Mitchell has led ANOC on an interim basis but the timing may be right for Sweden’s Gunilla Lindberg to take over after 17 years as secretary general.

Whether named Henriques, Saldana, Lindberg – or something else -- the era of women as Olympic understudy is clearly over.

Horses will be ridden, balls volleyed, and hurdles leaped when the Olympic Games come to Los Angeles in 2028. However, discs will remain grounded after flying disc was left off a shortlist of sports invited to submit proposals for inclusion in the LA28 Summer Olympics.