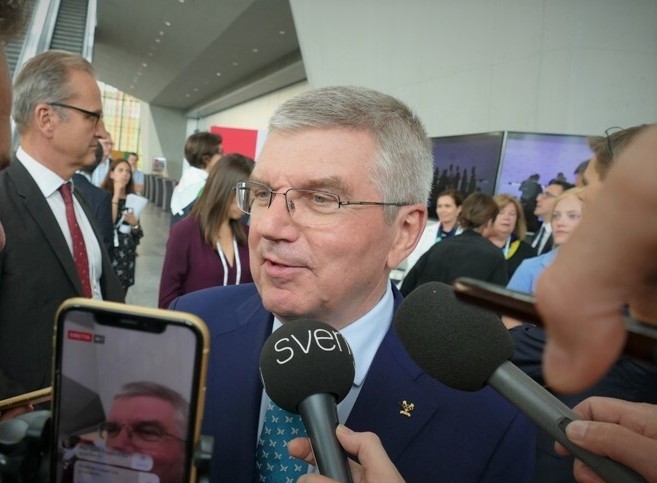 (ATR) The athletes are arriving, IOC leaders are gathering, and the people of Tokyo remain fretful as the Olympic juggernaut is here. By no means exhaustive, here’s a list of 10 individuals who will draw their share of attention in Tokyo.

Thomas Bach – The IOC President should be prepared for the starring performance of his eight years in office. Rio de Janeiro had its challenges in 2016, when Bach oversaw his first Summer Olympics as president. But the tensions and travails of handling a postponement of the Games amid the ever-morphing corona virus pandemic is incomparable to anything that has come before.

Bach will be a lightning rod for criticism from a Japanese public that remains unenthusiastic about the Olympics and fearful of the spread of COVID 19. This week he’s planning a day trip to the Hiroshima memorial. The event may expose some of the conflict many Japanese feel about the Olympics. Bach, elected in March to a final four years in office, also will lead the first in person IOC Session since the outbreak of the pandemic.

Yuriko Koike – The governor of the Tokyo Metropolitan Government has been a bulwark against waves of worry from the electorate, as she insists the Games proceed on their postponed schedule. While Prime Minister Suga Yoshihide may have the final say on solutions to crises arising during the Games, Koike will be the real decision-maker behind the scenes.

Gwen Berry – The U.S. hammer throw star comes to Tokyo with high expectations. Not just for a possible medal-winning performance, but also for her candid views on social issues. Her podium protest at the 2019 Pan American Games drew a warning from the U.S. Olympic and Paralympic Committee that was subsequently withdrawn.

Berry will be emblematic of other athletes from around the globe who may speak out in keeping with – or ignoring – new IOC guidelines for athletes to express their opinions at the Tokyo Olympics.

While Berry may draw heaps of attention, she doesn’t compete until August 3. Any number of athletes may beat her to speak out first – or to stage a podium protest.

Molly Solomon – NBC Olympics chief will oversee production of the all-important U.S. broadcast of the Games. Bereft of spectators and to be held under a state of emergency, Samuels and colleagues have an Olympics like no other to cover. As the biggest single source of revenue for the IOC, the NBC coverage of the Games must draw the audiences that make it possible to pay billions to Lausanne.

Naomi Osaka – The tennis star will command more attention than just about any other Olympian in Tokyo. The Olympic tennis tournament will be her first since she withdrew from the French Open in May to deal with mental health issues. Assuming she competes later this month, Osaka will carry hopes for a gold medal for Japan. No pressure there.

Simone Biles – Already considered the greatest gymnast of all time, the U.S. champion and defending gold medalist will face expectations of near-perfection. Biles competes in the first week of the Games, which should give a ratings push in the U.S. and other important markets.

John Coates – The unflappable Australian will close out his 20 years on the IOC in Tokyo. For the past eight years he has led the IOC Coordination Commission for Tokyo, shuttling between Sydney and Tokyo monthly until the pandemic struck in 2020. Coates has been in Tokyo since early June overseeing final preparations and infuriating some in Japan with his dogged determination to hold the Games, pandemic or not. The IOC Session next week is expected to award the 2032 Olympics to Brisbane. Coates played a key role in crafting the new IOC process to select host cities and as Australian Olympic Committee president he delivered plenty of encouragement to the Brisbane bid team.

Kit McConnell – The IOC director of sports will watch the program for the Olympics as it heads to the future, leaving some sports behind while others become new regulars at the dance under the five rings.

Weightlifting and boxing are the most threatened of the sports, both with long-documented problems with governance, ethics and doping. The IOC says the experience of both sports in Tokyo will be factors in determining whether they remain on the Olympic program. Those politically-charged decisions belong to Bach and the IOC. They will be based on data gathered by McConnell.

Tokyo will host the Olympic debut of four sports that will now be seeking permanent spots on the program. McConnell’s information on karate, skateboarding, sport climbing and surfing will be critical to their future. Baseball and softball, which are returning in Tokyo, also want to be back at every Games.

Seiko Hashimoto – The president of the Tokyo 2020 Organizing Committee since earlier this year, Hashimoto has proved to be a steady and capable leader for the final months to the Games. Hired in the aftermath of sexist comments from previous president Yoshiro Mori, Hashimoto has helped shatter patriarchal attitudes in Japan, which is a new kind of Olympic legacy. The four-time Olympian should be a player for some time to come in the world of international and Japanese sport.

Christophe Dubi – The executive director of the Olympic Games knows where all the switches and dials of the Tokyo Olympics are located and how they should be set. If anything goes wrong in Tokyo, Dubi will be the IOC exec overseeing the fixes. If all is well, Dubi will earn the right to smile August 8.