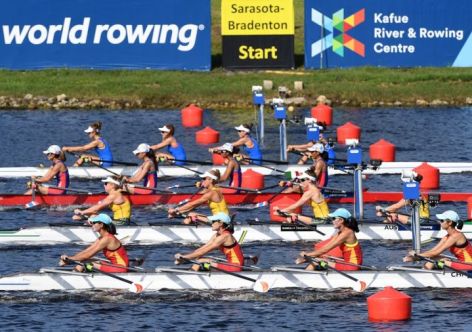 The main order of business at the congress will be the selection of the host city of the 2021 World Rowing Championship. As the sole bidder, Shanghai, China is expected to be approved as the host city.

Three cities are also in the running for the 2020 Senior, U23 and Junior World Rowing Championships, including Plovdiv, Bulgaria, Poznan, Poland and Bled, Slovenia.

The FISA Congress takes place following the conclusion of the World Rowing Championships on Oct. 1. This is the first time in 20 years that the tournament was hosted in the United States, with the newly developed Nathan Benderson Park serving as the venue.

The FISA Congress is being held at the Polo Grill and Bar and will feature discussions about rowing’s Olympic program at Tokyo 2020 and possible changes to future world championship boat classes.

The congress will elect new FISA Council and Executive Committee members. The location of the 2018 FISA Congress in Plovdiv, Bulgaria is also expected to be confirmed.

Around the Rings will be on the scene in Sarasota.

The seventh project review of preparations for the Tokyo 2020 Olympics and Paralympics begins this week in Japan.

The opening remarks of the review will take place at Toranomon Hills Mori Tower on Tuesday morning with statements from Coates and Tokyo 2020 president Yoshiro Mori.

A reception will be held that evening at Ascot Hall in Hotel Okura with a photo opportunity of Coates meeting local government leaders. Mori and Tokyo Governor Yuriko Koike will also attend the reception where new Tokyo Olympics minister Shunichi Suzuki will give a toast.

Meetings will be held between Coates and the Tokyo 2020 Organizing Committee and government leaders in between the scheduled press opportunities where progress updates will be delivered.

The project review will conclude with a media briefing on Oct. 4 with remarks from Coates and Mori followed by a question and answer session from media attending the project review.

The 2017 Artistic Gymnastics World Championships begin on Oct. 2 in Montreal.

It marks the first time in 32 years that the event will be held in the 1976 Summer Olympics host city.

More than 450 gymnasts from 72 countries will compete at Montreal’s Olympic Stadium.

Only individual competition will be on the program because this is a post-Olympic year.

Seven men’s titles and five women’s titles will be up for grabs, with a maximum of six men and four women per country participating in the qualifying rounds.

Three gymnasts per country may compete on any given apparatus, but no more than two per country can qualify for the All-around and apparatus finals.

The championships run through Oct. 8.

Competition begins Oct. 6 at the Palladium de Champéry with athletes from the 54 Member Associations of the World Curling Federation participating in the tournament.

Teams are scheduled to arrive on Oct. 5 ahead of the championships with training runs and the first matches taking place on Oct. 6. An opening ceremony will take place on the ice following the conclusion of the first match between Austria and Finland.

Athletes will then compete across 20 matches each day before quarterfinals begin on Oct. 13. The final day of competition will feature a semi-final match before the gold and bronze medal games.

A closing ceremony and closing banquet will conclude the championships on Oct. 14.