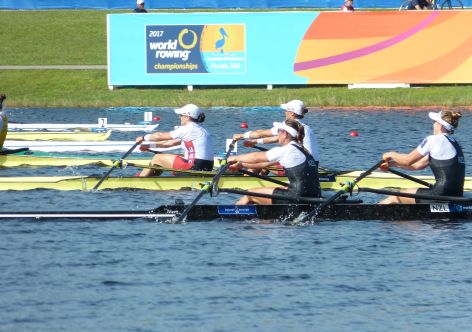 (ATR) World Rowing President Jean-Christophe Rolland tells Around the Rings it would be a shame not to bring the championships back to the world-class venue on the Gulf coast of Florida.

"I cannot say when exactly, but for sure," Rolland tells ATR after the conclusion of the 2017 World Rowing Championships at Nathan Benderson Park. "You have here one of the best rowing courses in the world, the highest standards you can expect.

"So it would be a shame not to be back and I’m sure we won’t wait another 23 years to have another World Rowing Championship in the United States."

Rolland concluded the championships by thanking the organizers, volunteers, athletes and spectators for their support making the event a resounding success, especially after Hurricane Irma struck Florida just two weeks prior to the start Sept. 23.

Though the storm traveled north through the Sarasota area, damages and inundations were limited compared to other Florida cities.

"We have been very pleased with these championships, especially with the conditions they had to deal with which were really, really difficult," Rolland says. "You know the context, two weeks before to face such a dramatic situation makes this success even more remarkable.

"I would like to express my gratitude to all of the people who have made these championships happen in the best conditions. Someone who had no idea what was the situation two weeks ago could never have imagined that we had that level of difficulty."

Athletes and organizers agreed with Rolland, saying that the newly developed Nathan Benderson Park is comparable to an Olympic rowing venue.

"This is a really awesome venue," women’s double scull silver medalist Ellen Tomek of the United States tells ATR. "To me, it’s more reminiscent of an Olympic venue and it’s designed after an Olympic course."

With warm weather conditions and packed grandstands, Tomek and her teammate Meghan O’Leary took advantage of the home field advantage to boost them to the podium.

"We could hear them for 500 meters away so it was really awesome," Tomek said. "There are so many fans here and it’s really exciting and a really amazing venue. I’m really proud to call it a home course being in the U.S."

Despite the home field advantage, Team USA was unable to capture any gold medals from the event. However, rowers from the U.S. placed fifth in total medals with six total. Italy, New Zealand and Australia led all countries with three golds a piece while Italy earned the most medals with nine. In all, 29 countries made it to the podium in perfect race conditions on the final two days of competition.

O’Leary says she would love to see the World Rowing Championships come back to Sarasota in the near future.

"It’s always fun having it on a home course, well this isn’t our home course but our home country and soil so to speak," O’Leary tells ATR. "It was an awesome job, an amazing event, great venue and we’d love to see it come back."

And local organizers agree. Sarasota 2017 media and public relations manager Max Winitz tells ATR he thinks the turnout at this year’s championships prove the venue has what it takes to welcome world-class rowers again and again.

"The turnout has been phenomenal," Winitz says. "We kicked off with the opening ceremony on Sept. 23 and there were 10,000 here for that event. And we’ve had a really good crowd each day this week and this is considered championship weekend.

"We’ve heard great things from FISA," he says. "I think they’ve been blown away by the event, blown away by the hospitality and I would say there’s a pretty good chance – in hopefully the near future – that this event is held again in Sarasota-Bradenton."

The championships will be held in Plovdiv, Bulgaria in 2018. Plovdiv is seeking to host the event again in 2020 but is facing competition from Poznan, Poland and Bled, Slovenia with the winner to be determined at the World Rowing Congress Oct. 2.

Fresh off his election to the International Olympic Committee, Rolland will lead the congress where three of his new colleagues will also be in attendance - Canadian Olympic Committee president Tricia Smith, IOC vice president Anita DeFrantz and honorary World Rowing president Denis Oswald.