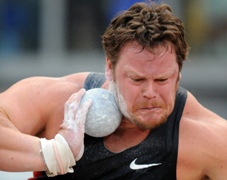 Speculation ends this week on the field for 2020 with bid city applications due to the IOC by midnight Thursday and a formal announcement expected Friday.

The IOC EB will select which of those cities will move into the final stage of the campaign next May. The vote to select a 2020 host comes at the IOC Session in Buenos Aires scheduled for September 2013.

In the meantime, be sure to follow Around the Rings on Friday for a city-by-city breakdown of the 2020 race.

Deluge of Can’t-Miss Moments in Daegu

Nine of ATR’s 10 must-see eventswill unfold this week at the athletics world championships.

Last night’s showpiece men’s 100m final is the only one already in the books at Daegu Stadium.

Some of the can’t-miss finals include the men’s 110m hurdles on Monday, women’s pole vault on Tuesday and women’s 800m on Sunday, also the closing day of competition.

Tuesday could also feature two of the sport’s most controversial athletes going head-to-head should double-amputee Oscar Pistorius qualify for the 400m final alongside defending Olympic and world champion LaShawn Merritt, who recently completed a drug ban.

A small group from the IOC will make the most of their time in Korea, heading from Daegu up to PyeongChang for aseminar with 2018 organizers. Gunilla Lindberg, chair of the Coordination Commission and IOC Olympic Games Executive Director Gilbert Felliwill be joined by a group of staff from IOC headquarters. More than 150 people are expected to attend from PyeongChang, representatives from the former bid, the government and the private sector. The seminar is meant to give a big picture view of what the IOC expects fromPyeongChang in the next seven years.

Roughly 5,000 athletes, coaches and officials from 52 countries are expected in the capital alongside as many as 2,000 journalists.

The quadrennial continental Games features events in 20 of the 28 summer Olympic sports as well as well as chess, karate and netball. Athletics and swimming will also feature events for disabled athletes.

After a break of almost two weeks, London’s busy schedule of test events resumes Thursday through Sunday with a sprint canoe invitational at Eton Dorney, site of the recent junior rowing world champs. LOCOG then enjoys a full month off from its 2012 dress rehearsals.

The rowing world championships running this week in Bled, Slovenia double as the sport’s main qualifier for London 2012.

Mountain biking has its world championships Wednesday through Sunday in the Swiss resort of Champéry.

Olympic qualification points will be up for grabs throughout the five-day affair.