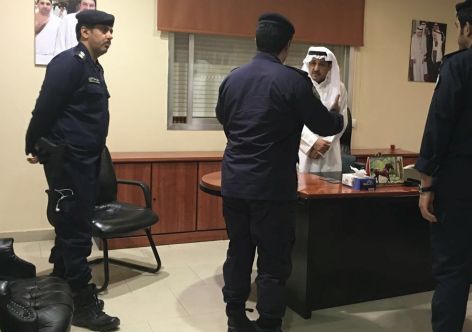 The Emir seized control of the two sports organizations on Aug. 28 using Kuwaiti police to escort the former leaders out of office. Around the Rings is told the sports executives passively resisted the removal and no injuries have been reported thus far.

Both organizations were dissolved on Aug. 25 by the Kuwait Public Authority of Sports (PAS) for violating the new Kuwait sports laws, citing "financial irregularities" and "countless violations". These new sports laws led to the International Olympic Committee and FIFA suspending Kuwait’s sports federations in October 2015 for violating its positions on sports autonomy.

He told the new leaders to use all resources available to helping young athletes achieve "whatever they aspire to", according to the Kuwait News Agency (KUNA).

"The Kuwaiti flag will again flutter on the world’s sports arenas," the Emir told KUNA, alluding to the Olympic flag being flown when Fehaid Al Deehani of Kuwait won gold in trap shooting at Rio 2016 as a result of the country’s suspension.

The leader of the dissolved sports bodies Sheikh Talal Al Fahad says the decision represents a crisis of community and national values.

"It is unfortunate that such a mentality is trying to exploit government positions to manage sport by force," says Sheikh Talal.

"It was not a surprising decision, although, as a national sports sector, we counted on the wise people in the government to stop this bleeding of diversity values, the values of senior citizenship, money, time and human dignity, since the minister monopolized the authority of sports decision."