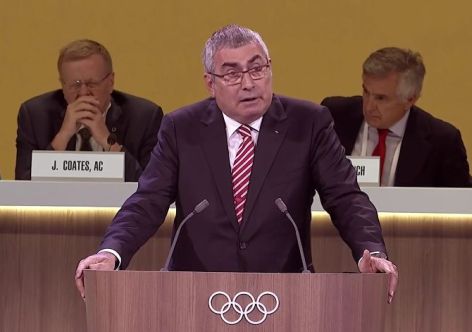 (ATR) World Archery President Ugur Erdener is now a vice president of the Association of Summer Olympic International Federations after the resignation of CK Wu.

The former International Boxing Association president resigned from three of his positions in the Olympic Movement on Nov. 20, beginning with his AIBA presidency. Wu’s resignation from the ASOIF Executive Council and International Olympic Committee Executive Board quickly followed as confirmed by both organizations.

Wu’s IOC executive position, held since 2012, was tied to his role representing International Federations as an ASOIF executive. Erdener, who was named Wu’s interim replacement on the ASOIF Council in a Nov. 21 release, is already an IOC vice president and is unlikely to become the ASOIF representative for the IOC EB.

It is possible Wu could be replaced on the IOC EB as soon as February when leaders of the Olympic Movement gather for the IOC Session in PyeongChang, South Korea ahead of the 2018 Winter Games.

The ASOIF website removed Wu as its vice president a day before the official release confirming his resignation. Erdener has now been moved up on the executive page adjacent to ASOIF president Francisco Ricci Bitti as the new vice president.

Despite his other resignations, Wu remains an IOC member, a distinction he has held since being elected to the organization in 1988. His member history on the IOC web page has already been updated to reflect his resignation from the Executive Board.

Wu, now 71-years-old, has nine years of eligibility left with the IOC since he was elected before 1999. The new age limit for IOC members is 70.