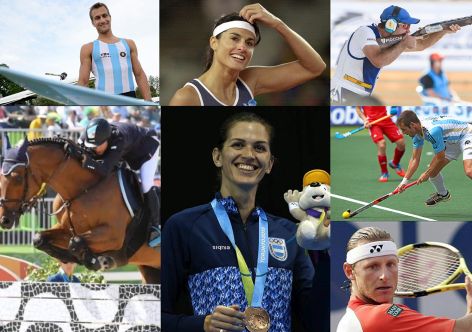 (ATR) The Argentine Olympic Committee (COA) names the first 25 global sports stars who will be a source of inspiration for the nearly 4,000 athletes competing in the Buenos Aires 2018 Youth Olympic Games.

The International Olympic Committee has projected 50 international figures to be involved in the youth sports festival in Argentinean capital as guides to young athletes who, in many cases, will make their Olympic debut in Argentina.

The athletes included in the program, called Athlete Role Models (ARMs), were elected by the 32 International Federations included in the Olympic program. Each of the elected athletes will spend at least five days in Buenos Aires during the YOG.

The first selections include five renowned Argentine athletes, including Gabriela Sabatini who is often considered the best Argentine tennis player in history. Sabatini was the flag bearer for Argentina at Seoul 1988 Olympic Games where she earned a silver medal.

Around The Rings asked a member of the Organizing Committee about the possibility that football star Lionel Messi would join the program. "We do not know," replied the Buenos Aires 2018 official. In 2008, Messi led Argentina to the gold medal in the Beijing Olympic football tournament.

The ARMs will have access to the Olympic Village and will carry out a series of workshops and educational and cultural activities that will focus on areas such as skills development, professional advice, how to lead healthy lifestyles and Olympic values.

In addition, the ARMs will be "behind the scenes" at competitions and will hold informal dialogues called "Chats with Champions". Young athletes, fans and spectators can all participate in the question and answer sessions with Olympic athletes.

The main objective of the program is to allow the model athletes to share their experiences and inspire athletes to do the best that they can both on and off the field of play, the COA said in a statement.

"The sport has given me enormous opportunities throughout my life and I hope to help inspire a new generation of players and fans," Sabatini said about her new role. "The Youth Olympic Games in Buenos Aires will be a wonderful occasion, and I am excited to have the opportunity to participate and use my experience, my sport and my city."