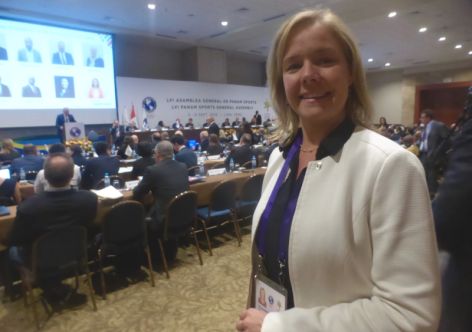 Earlier this week, the Board of Directors of USA Gymnastics announced that president Kerry Perry was resigning immediately from the National Governing Body. Perry relinquished the position just nine months into the job, in the wake of continuing criticism and fall-out from the Larry Nassar sex abuse scandal.

Hirshland, who assumed the leadership position with the USOC on July 12, said it was a necessary move.

"I issued a statement late Friday expressing our disappointment with the challenges and the progress the organization had made," Hirshland said in an exclusive interview with Around the Ringsat the Panam Sports General Assembly in Lima, Peru."We’re optimistic that the search for a new leader will help them make forward progress."

USA Gymnastics said in a statement that a management committee will run the organization until an interim president is named in the wake of Perry’s departure. A search committee consisting of board members and "athletes and others from the gymnastics and NGB community" will be formed to find a long-term replacement.

Hirshland emphasized that the USOC will not assert influence over the selection of a new leader, despite recent questionable hires by the NGB.

"It is the role of the board of USA Gymnastics to select their leader. If they ask for our involvement on a search committee or something of that nature, certainly we’re here to support, but their board needs to lead this process and we’ll need to play a support role," Hirshland said.

Most recently, the NGB came under fire for hiring Mary Lee Tracy to lead its women’s elite development program. Tracey was criticized after posting statements in 2016 perceived to be in support of Nassar, saying he had "been amazing," citing positive personal experiences.

Hirshland said the NGB’s transition will take time and the USOC will continue to assist USA Gymnastics however it can.

"The USOC is in a support role. Our job here is to be helpful to them – to bring our expertise to the table. We brought resources to the table, both human and financial.

"We’ll continue to stand by and ensure that we are supporting the organization as it does the hard work it needs to do. All the while, we have our own work to do and we’re working on those things as well."

U.S. Olympic gymnastics stars, including Simone Biles, Aly Raisman and Jordyn Wieber, among other athletes, sports attorneys and Olympic stakeholders have called for the USOC take a more proactive and vigilant role in ensuring the safety of its athletes. It seems that Hirshland’s success could be judged by her ability to implement this cultural shift and revised USOC philosophy.

Hirshland said she is embracing the challenge that lies ahead.

"I’m incredibly proud to be a part of Team USA – there is nothing more fulfilling than that opportunity," she said."Every corner I turn is a new opportunity on the global stage to meet and collaborate with administrators and partners, but also to watch and celebrate the achievements of incredible athletes."

Hirshland is accompanied by USOC president Larry Probst this week in Lima. She said the gathering of Olympic leaders from the 41 Panam members in Peru has been a vast learning experience.

"It is an incredible opportunity to meet an enormous number of people in one place at one time and gain perspective on the role of the USOC in the greater Olympic movement," the Hirshland said.

"Clearly, we play a role and my job is to help to determine what that role will be and can be as we move forward, both within our own country, but quite frankly also in the world. The spirit of collaboration is critical."