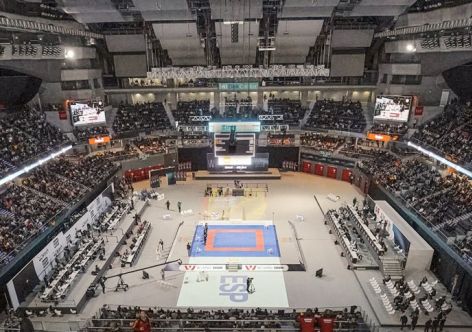 The following was written by the World Karate Federation and published here in its entirety.

The social media channels and global audience of the World Karate Federation continue their incredible growth across multiple platforms, as highlighted in the 2020 International Sports Federation Social Media Ranking.

Published by leading global communications agency BCW Sports, the report stresses the strength of Karate on social media and confirms the WKF’s prominent position among the Olympic International Federations (IFs).

The World Karate Federation takes the position 13 among all 33 Olympic Sports in the programme of the Tokyo 2020 Olympic Games in the total number of followers on social media. With over 1.3 million followers across all platforms, the success of the WKF’s dynamic digital strategy is confirmed as Karate’s international governing body strengthens its position among the top IFs on social media.

YouTube is the platform that best showcases WKF’s remarkable progress on social media. Karate’s home on YouTube, WKFKarateWorldChamps, takes the 8th place in the ranking of platforms with the most subscribers among all international sports federations, Olympic and non-Olympic. With 525,000 subscribers, the growth of the WKF on YouTube is also highlighted as the Karate channel is ranked 7th among the Olympic IFs, moving up one place the year prior.

In addition to the increase in the number of subscribers, WKF’s impact on YouTube is even more significant in views per video. According to the ranking published by BCW Sports, the WKF YouTube Channel is the 2nd platform with the most views per video among all the Olympic IFs, only behind FIFA. This outstanding result is emphasized by the fact that the WKF takes a remarkable 4th position in the ranking of views per video on YouTube among all international sports federations, Olympic and non-Olympic.

The WKF’s emphasis on delivering high-quality, fascinating content is also showcased on Instagram, which leads the way in interactions and reach with younger audiences.

Despite the challenges of a year without events amid the impact of the coronavirus pandemic, the WKF has managed to continue its progress on Instagram. With over 296,000 followers, WKF’s Instagram @worldkaratefederation is the 12th most-followed platform among the Olympic international federations. Meanwhile, the WKF reaches nearly 500,000 followers on Facebook and it is ranked 18th among all the 33 international federations on the programme of the Olympic Games Tokyo 2020.

"This report provides further evidence of the strength and popularity of our sport all around the world," said WKF President Antonio Espinós.

The impressive influence of the WKF on social media contributes to the progress of the TV audiences of the top Karate events. The TV rights of the Karate 1-Premier League events and World Senior Championships are currently distributed over 153 countries around the world.

"Our agreements with TV networks demonstrate that Karate is an attractive and interesting sport for a worldwide-viewing audience. I am convinced that the TV audiences of Karate in the Tokyo Olympic Games will exceed all our expectations," stated Mr Espinós.