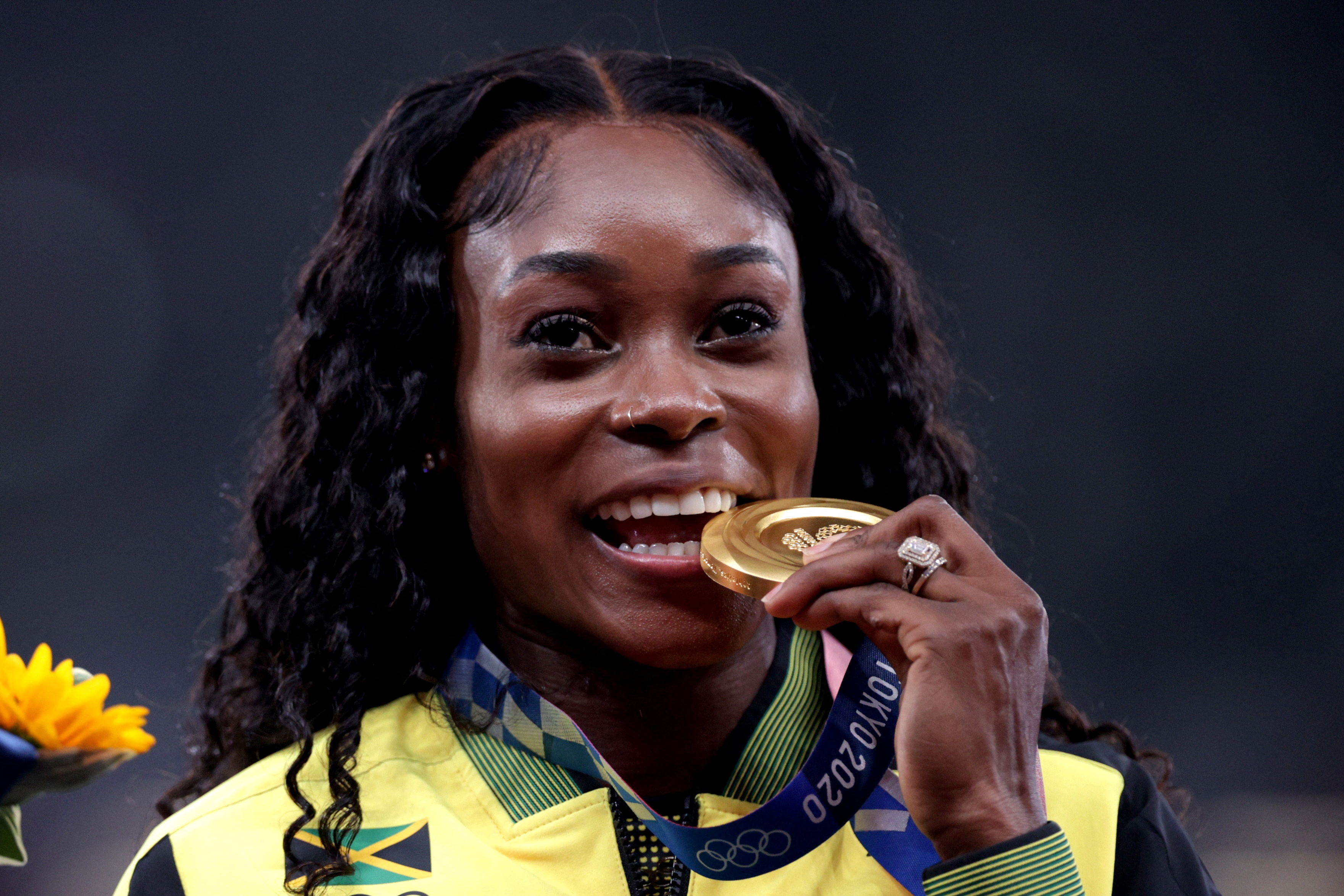 Elaine Thompson-Herah of Jamaica returns to the track where she ran the second-fastest women’s 100 meters in history for the Prefontaine Classic on Saturday.

Thompson-Herah is one of about a dozen individual Olympic champions set to compete in Eugene, Oregon, in the only Diamond League meet held in the United States. Organizers announced the largest press contingent in the history of the long-time event, which this year will serve as an appetizer for the first World Athletics Championships to be held on U.S. soil in July, also in Eugene.

The five-time Olympic gold medalist withdrew from the Diamond League meet in Birmingham, England last weekend due to “discomfort in training,” then entered a low-key meet in Kingston, Jamaica instead where she clocked 10.94 seconds into a headwind.

”I think the entire world knows I’m dealing with an Achilles injury,” Thompson-Herah said during a pre-meet press conference. “It is an injury that is frustrating, stressing. My injury does not require surgery, and it is very frustrating. Some days I have to sit on the side, not able to train.”

She also was bothered by a shoulder dislocation a month ago when she ran at the USATF Golden Games in California in one round of the 100 and then skipped the final.

”I am so determined to compete, because I really want to see where I’m at in the season right now,” Thompson-Herah said.

The 29-year-old Jamaican said she knows other athletes also have to contend with injuries, which she said are “part of the package.” 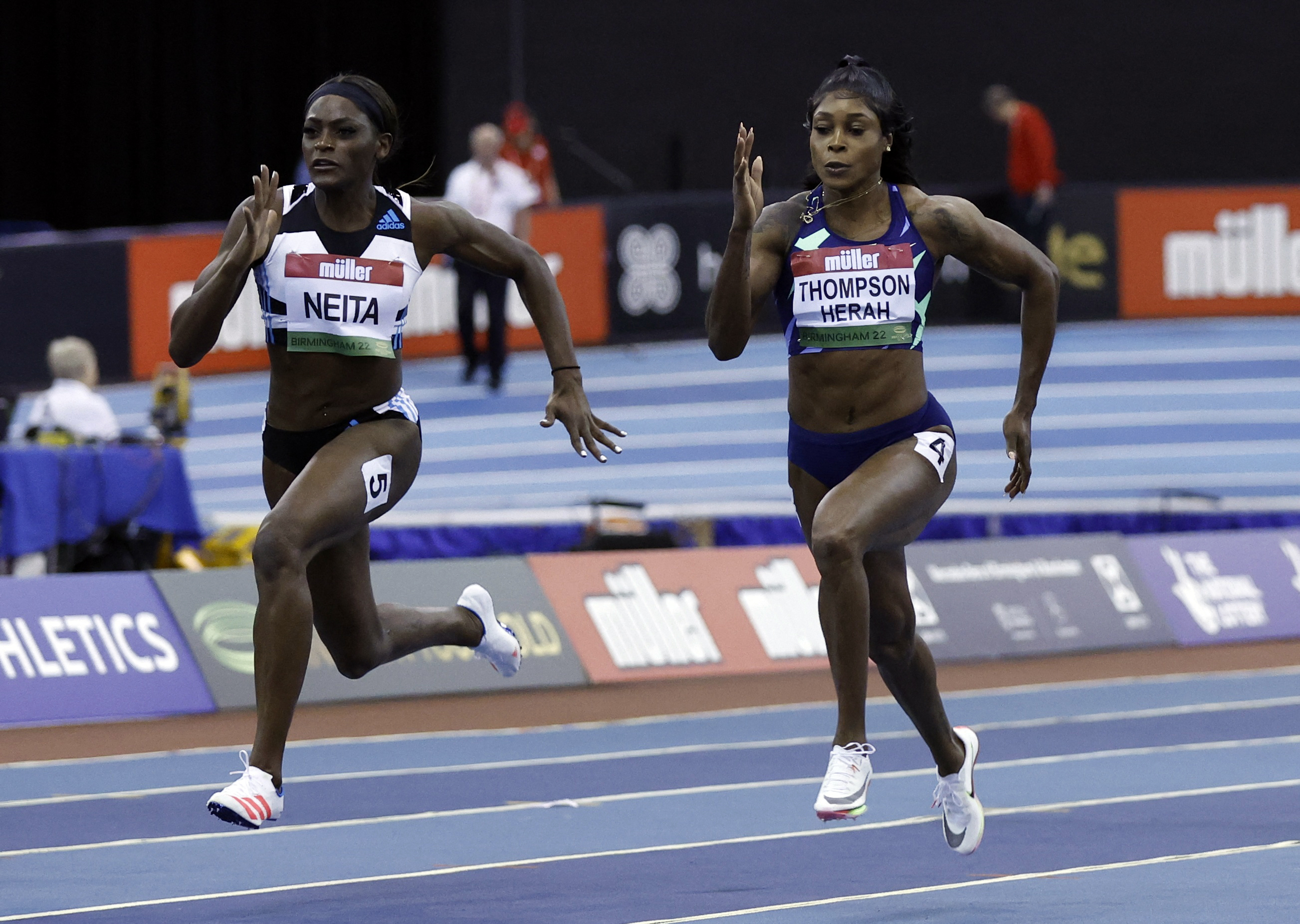 ”This sport is a hectic one,” Thompson-Herah said. “It’s unforgiving as well, year in and year out. You just try to bounce back and come back and I have done that many times and I’m here still doing my thing.”

At last year’s Pre Classic, Thompson-Herah led a Jamaican sweep with a time of 10.54 seconds, second only to the 10.49 run by Florence Griffith Joyner in 1988. Shelly-Ann Fraser-Pryce was second in 10.73 and Jackson placed third in 10.76. Meanwhile Richardson, returning from suspension after testing positive for marijuana and missing the Olympic Games, was last, placing ninth. Richardson had talked a good game in the pre-meet press conference.

Thompson-Herah, who was fresh off winning three gold medals in Tokyo — 100, 200 and 4 x 100-meter relay — and a European campaign, said she was surprised by such a fast time last year.

”I always tell people whenever I feel sluggish or slow, that’s when I run the fastest time,” Thompson-Herah said. “I honestly I didn’t feel that fast. When I feel awkward or off, that’s when I surprise myself.”

Unfortunately, track fans will not be treated to another duel between Thompson-Herah and Fraser-Pryce, the reigning world champion in the 100 and the Olympic champ in 2008 and 2012 and silver medalist in Tokyo. 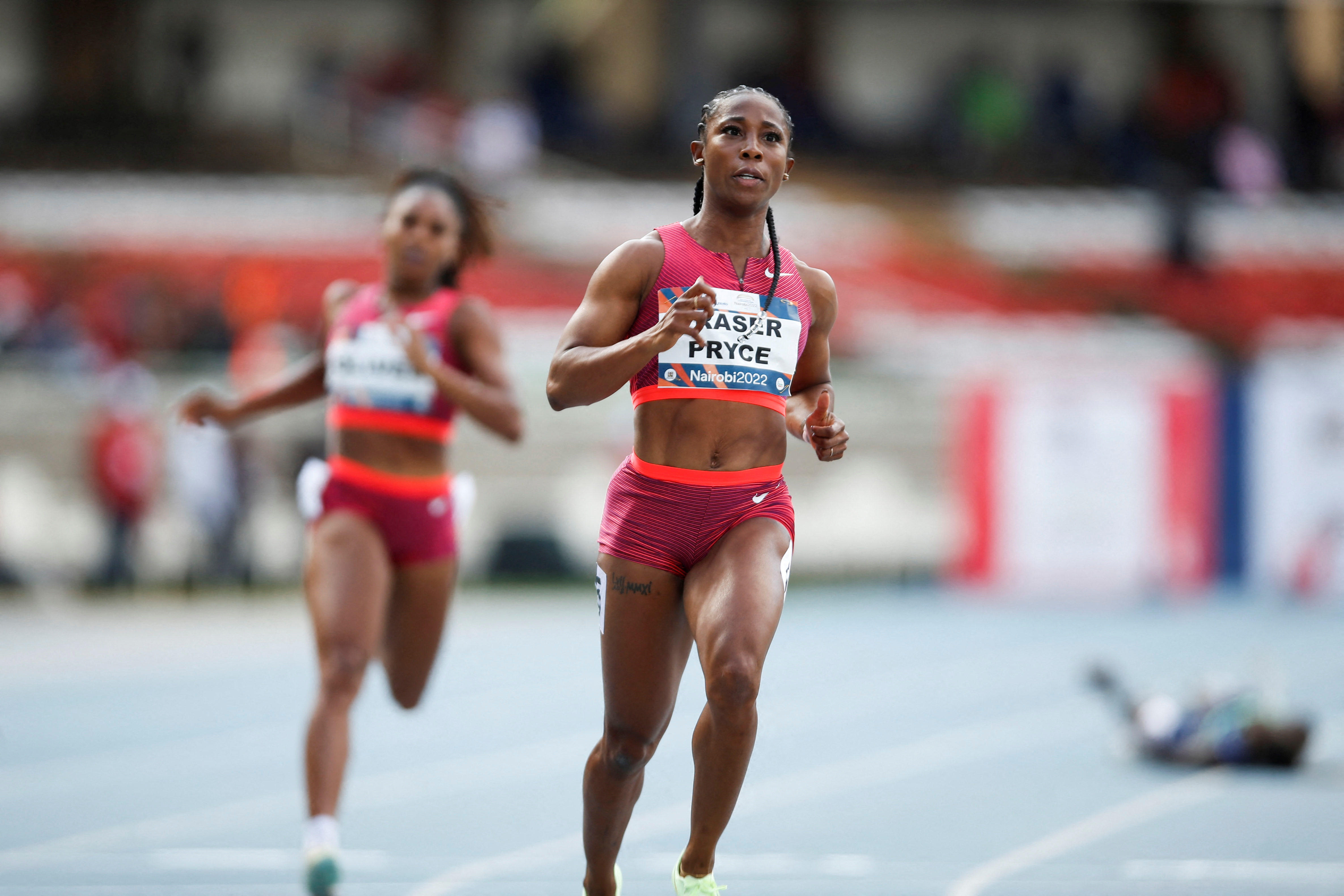 Jamaica's Shelly-Ann Fraser-Pryce competes in the women's 100 meters race during the third edition of Kip Keino Classic at the Kasarani stadium in Nairobi, Kenya May 7, 2022. REUTERS/Monicah Mwangi

Fraser-Pryce, who clocked 10.67 seconds earlier this season in Nairobi, Kenya will race the 200 instead. Fraser-Pryce has a bye into the 100 at worlds and was asked if she expected to double at the event.

”I’m 35, I don’t know,” she said with a laugh. “What I do know is I’m focused on doing all that I can to make sure I can succeed if I do both events. Last year doubling was hard; I thought it would be easy but it was very hard.

”I’m thinking about it, but it depends how you feel. Some mornings I feel very good and the next morning I feel 35.”

The men’s 100-meter field is just as stacked as the women’s. World champion Christian Coleman, Olympic medalists Noah Lyles, Fred Kerley, and Kenny Bednarek, plus Trayvon Bromell and Erriyon Knighton, the 18-year-old hoping to break 10 seconds for the first time, represent the United States. Olympic medalist Andre De Grasse of Canada will also be on the starting line.

However, Olympic champion Lamont Marcell Jacobs of Italy has withdrawn, citing a slight injury. He also withdrew from a showdown with Kerley in Kenya due to a medical issue. 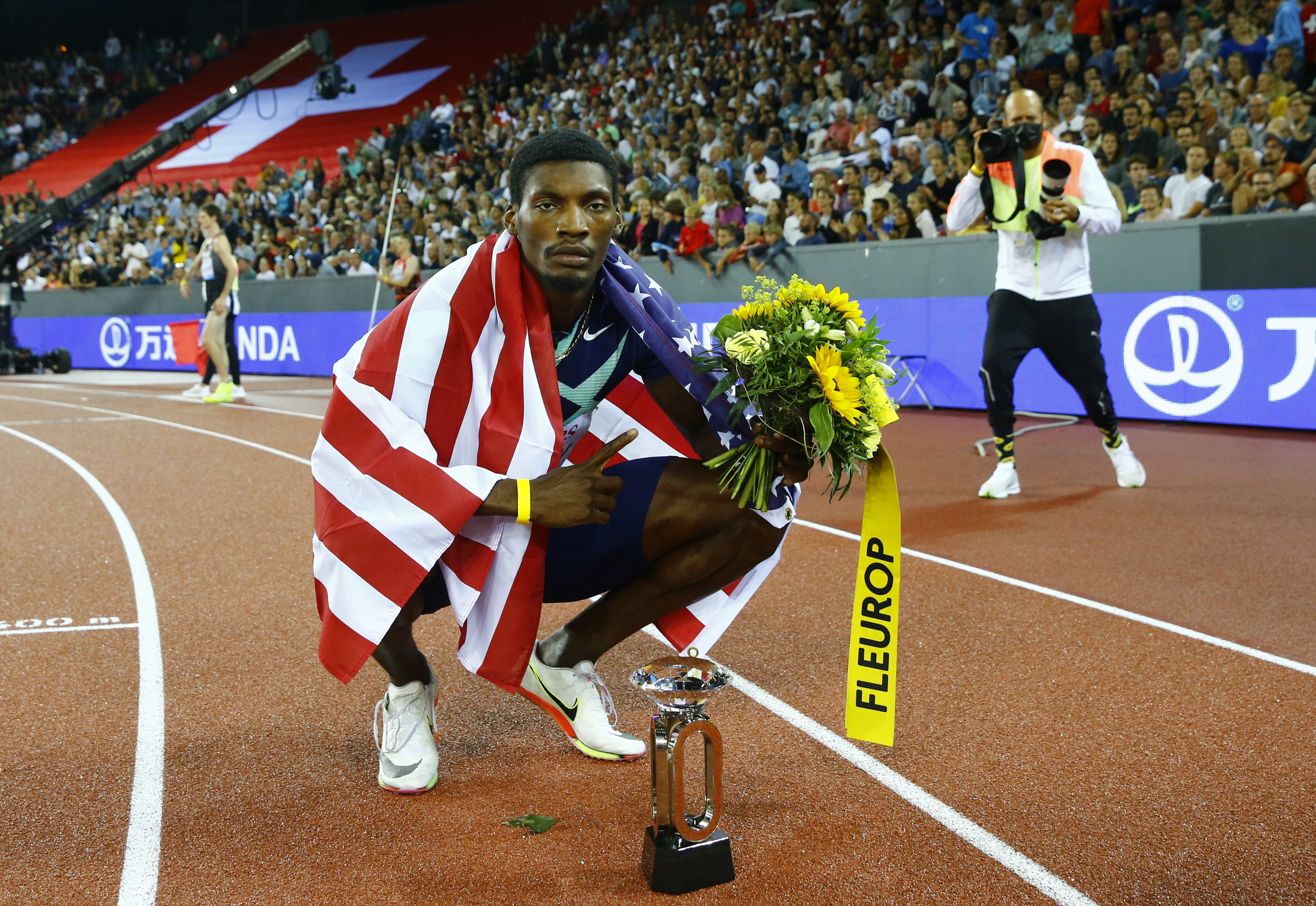 Kerley and Knighton appeared at the Friday press conference and they share an affinity for fast races and few words.

”I’m here to win,” Kerley said. He wouldn’t venture to guess what time that would take. “The ‘W’ is all that matters,” he said.

Knighton recently ran a 200 in 19.49 seconds, the fourth-fastest time in history. “I can’t really tell you how,” said Knighton, who just graduated from high school where he said he was tapped as “most likely to succeed” in the yearbook. “I think it’s just all behind the training.”

Other top showdowns are expected to include Jasmine Camacho-Quinn, the Olympic champion in the 100-meter hurdles, taking on silver medalist and world record holder Keni Harrison of the U.S.; Jakob Ingebrigtsen of Norway racing reigning world champion Timothy Cheruiyot of Kenya in the Bowerman mile; and Olympic gold medalist Ryan Crouser against perennial rival Joe Kovacs in the men’s shot put.

For the first time in 33 years, the Pre Classic will host Paralympic events — a men’s 400 and women’s 100. Blake Leeper has adjusted his blades so he is now 5–foot-8 instead of 6-foot 2 because he was deemed too tall to compete against able-bodied athletes with the longer blades. 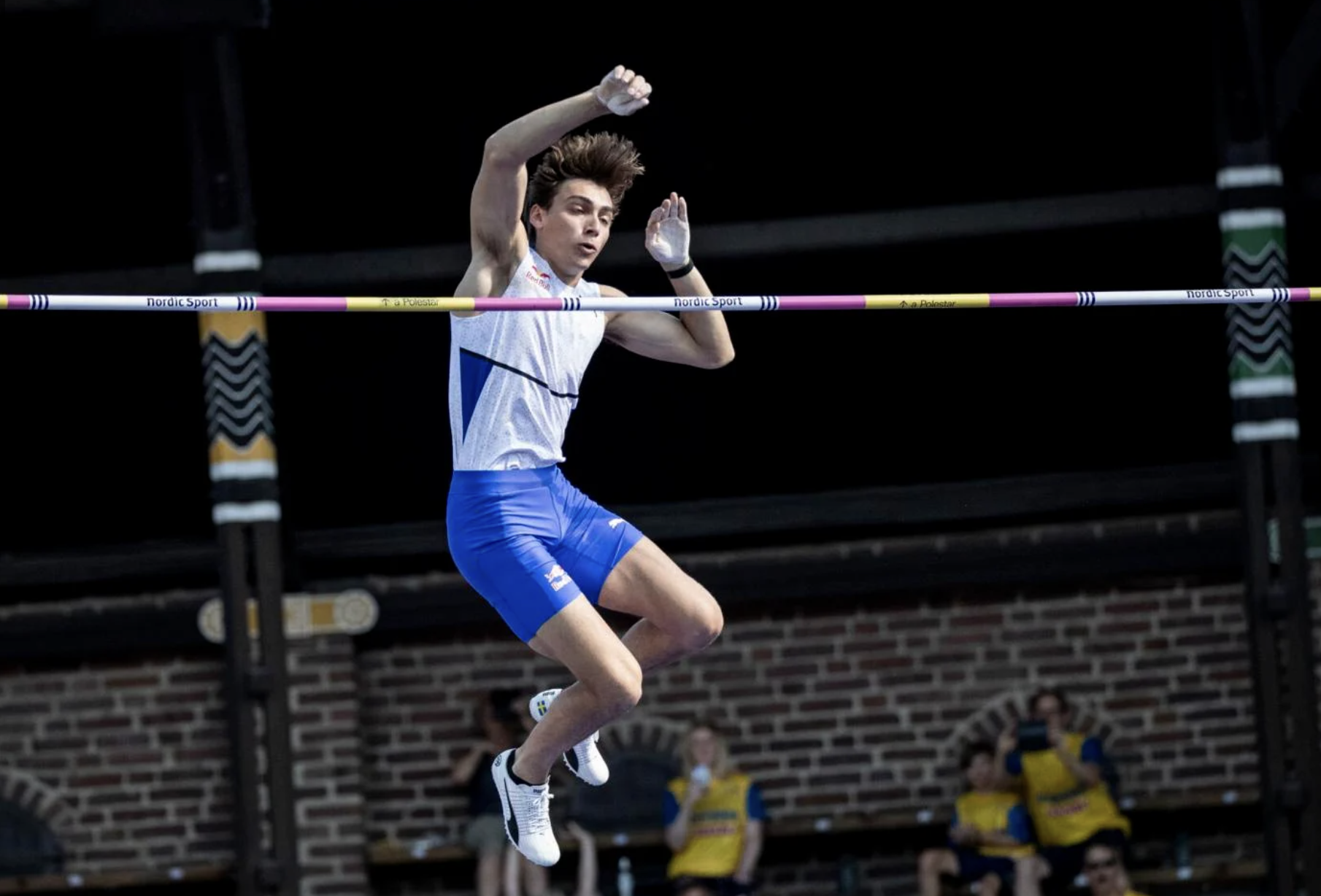 Due to expected rain on Saturday, the men’s pole vault, featuring world record holder Mondo Duplantis, the women’s discus including Olympic champion Valarie Allman, and the women’s high jump have been moved to Friday night.

Other Friday night events include the men’s and women’s 10,000 meters, which will determine Team USA competitors at the world championships, along with world-record attempts in the women’s 2-mile and men’s and women’s 5,000.

The women’s 2-mile is seldom run since it is not an Olympic event and is not measured in meters. Sifan Hassan of the Netherlands is expected to duel Francine Niyonsaba of Burundi. Hassan, the Olympic champion at 5,000 and 10,000 meters, has not raced since last September.