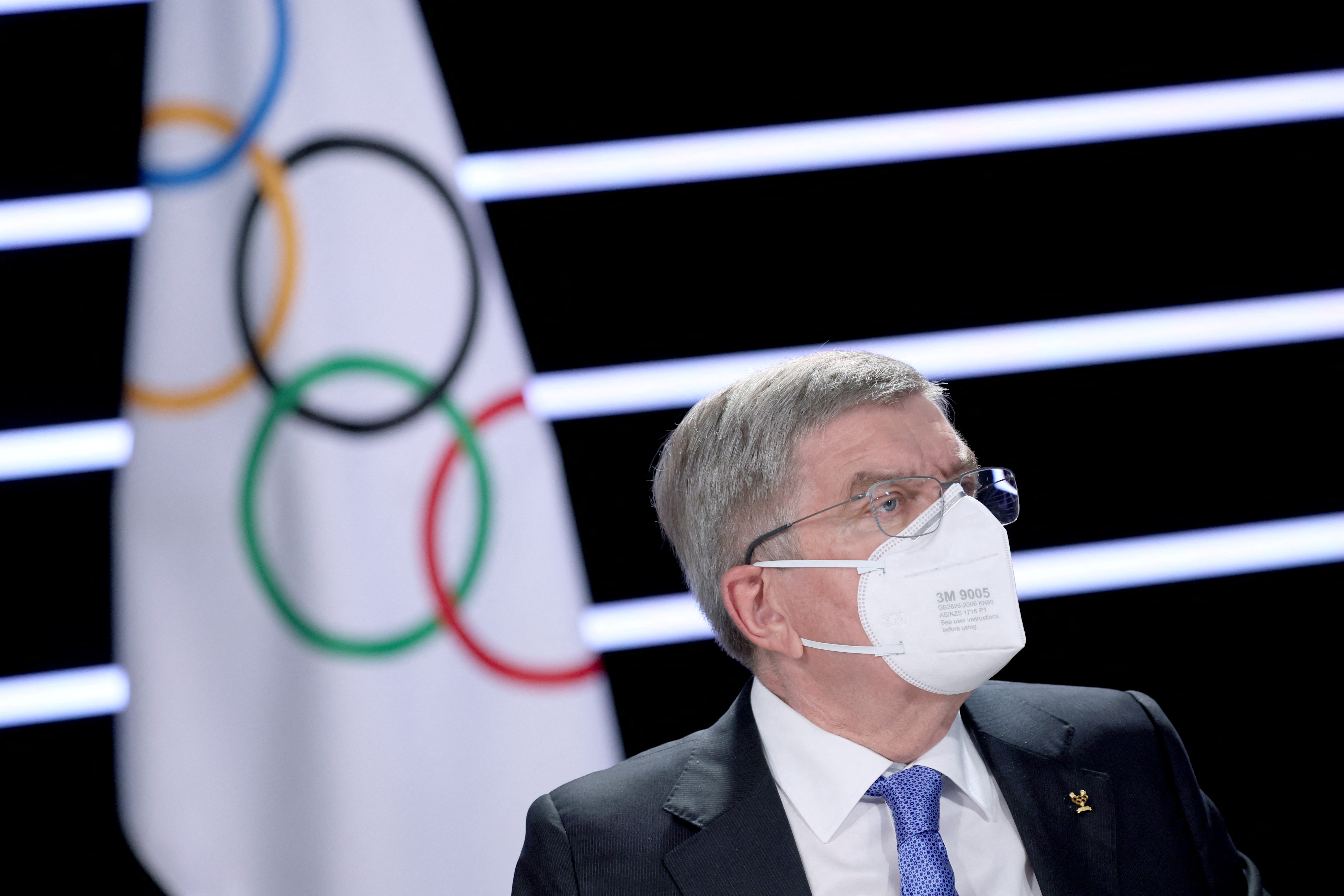 The unprecedented 139th International Olympic Committee (IOC) Session was so long a war started between its second and third day. The repercussions of Russia’s invasion of Ukraine dominated the final hours of the meeting, held Friday at Olympic House in Lausanne, Switzerland with most IOC members participating via Zoom.

IOC president Thomas Bach reiterated the IOC’s position regarding Russia and Belarus, although he gave no indication of their eligibility to send athletes to the 2024 Olympic Games in Paris. Meanwhile organizers from Paris and Milano Cortina 2026 cited supply chain issues, caused by the war as well as the pandemic, which are forcing them to “simplify” their plans as they ramp up preparations.

The day started with an emotional tribute to Alex Gilady, the influential IOC member from Israel who died April 13. He was posthumously awarded the Olympic Order.

Gilady was in Beijing in February when the 139th Session’s first two days bookended the Olympic Winter Games.

”It was not so long ago, but how much our world has changed since then,” Bach said. He recalled his appeal to “Give peace a chance” during his opening and closing ceremonies speeches. Russian troops, supported by Belarus, moved into Ukraine on Feb. 24, two days after the Beijing 2022 Games ended and while the Olympic Truce was still in effect.

”Unfortunately we could only appeal, because our relationship with the Russian political leadership has dramatically deteriorated over the past years,” Bach said. “It deteriorated following the doping scandal, cyber attacks and even personal threats to individuals from the IOC and Olympic Movement.”

The IOC president would not elaborate on the nature of the personal threats during his post-session press conference. 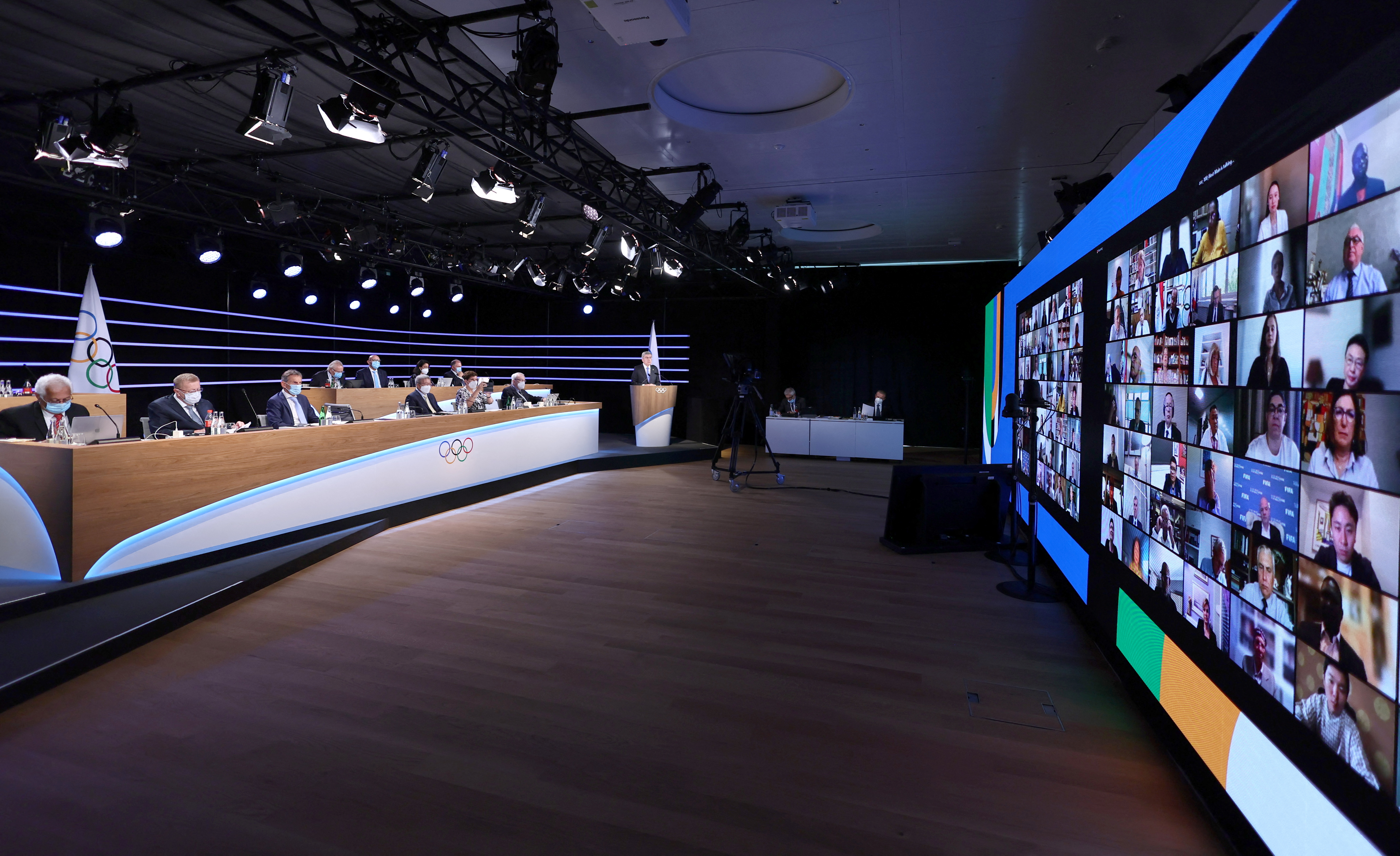 Bach said the IOC actions since the invasion have been two-fold: sanctions and protective measures to ensure the integrity of international competitions since the safety of Russian and Belarusian athletes could not be guaranteed.

Sanctions included recommending no international sporting events be held in Russia and Belarus, not allowing national symbols to be displayed and withdrawing Olympic Orders, including one awarded to Vladimir Putin.

Bach explained the IOC wanted to act rather than allow governments to take matters into their own hands regarding international competitions.

The IOC acted, he said, “with a very heavy heart.”

Bach said the organization was questioned about why it reacted to this war differently than other wars around the world. 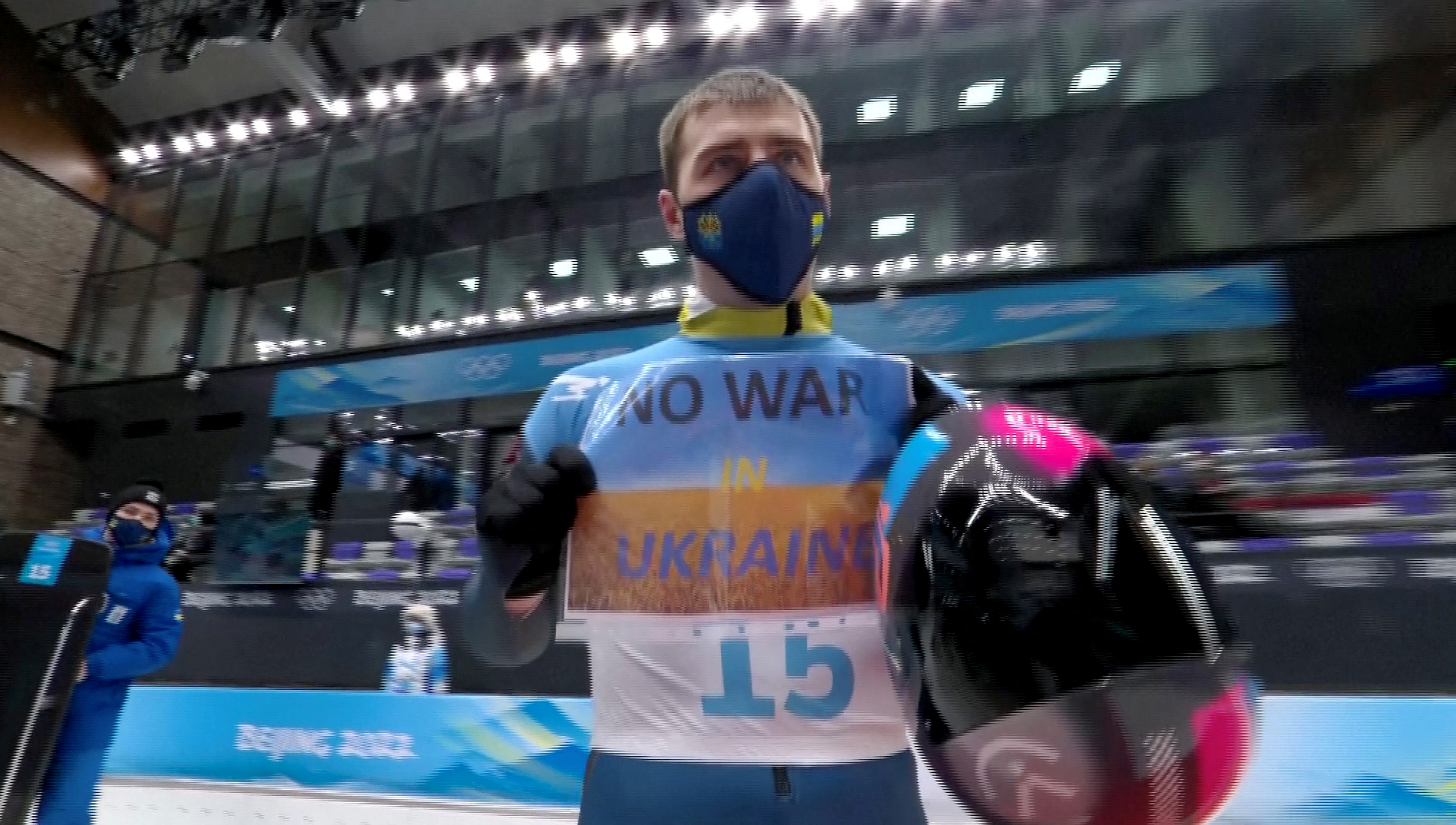 ”The war in Ukraine is different because it is a blatant violation of the Olympic Truce,” he said, adding that “the far-reaching political, social and economic consequences of the war make it a turning point in world history.”

Bach also pointed out sanctions were not extended to all members of the Russian Olympic community because they should only be imposed on those who were responsible for the war. However, he said the IOC is “monitoring closely who is supporting this war with their statements or actions and have drawn and will draw the necessary consequences. This has been demonstrated for example by FINA and FIG, who have sanctioned athletes expressing such support for the war.

”In judging this, we also have to realize that there is a Russian law threatening anyone who speaks out against the war with up to 15 years in prison. Therefore, we can appreciate that, under such circumstances, silence in itself can be a message.”

In the meantime, the Olympic mission is a humanitarian mission. 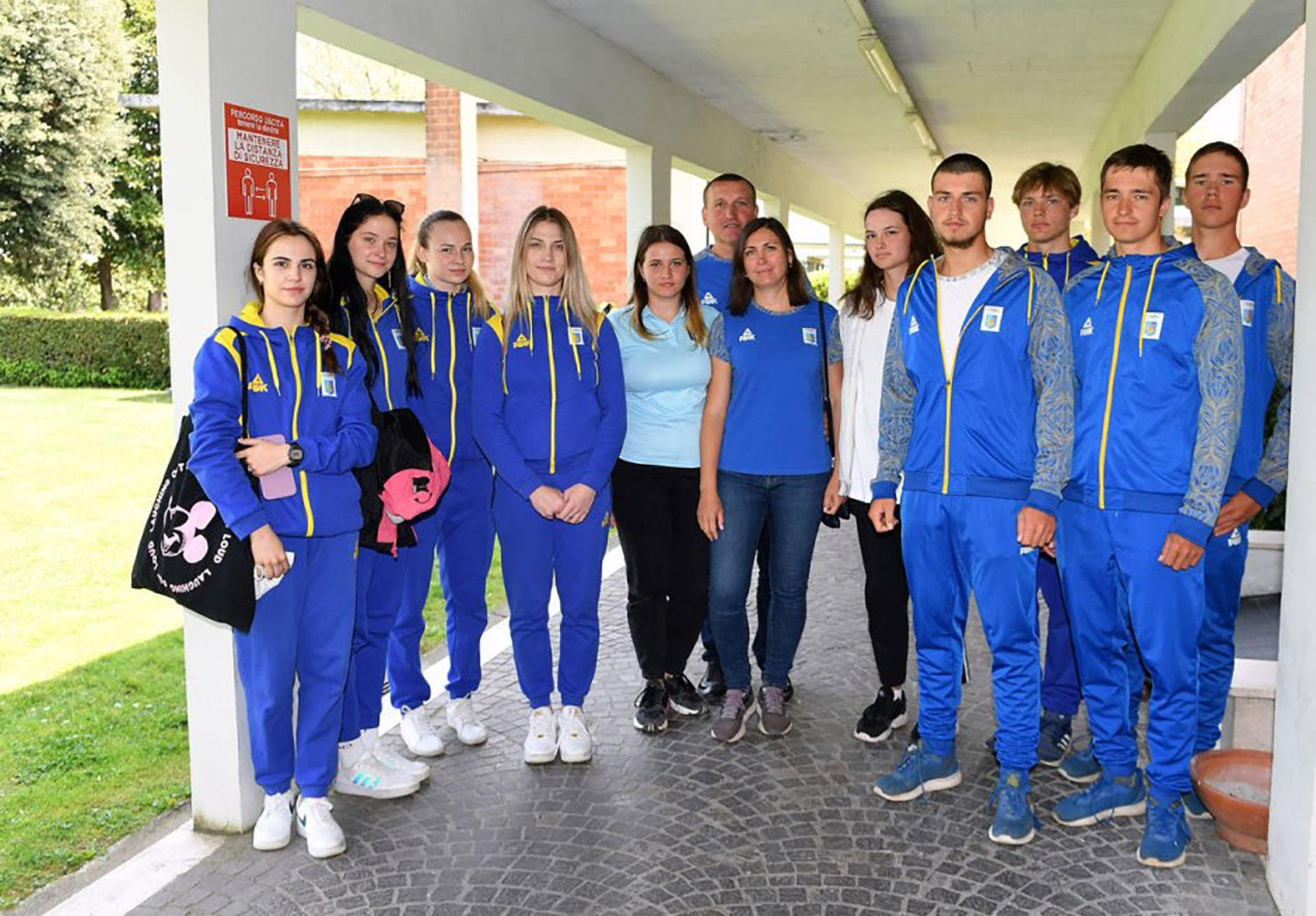 Bach turned the floor over to Sergey Bubka, the Olympic champion who is president of the National Olympic Committee of Ukraine.

Bubka is leading the coordination of the humanitarian efforts to help Ukrainian athletes maintain training and competition, much as the IOC has helped athletes in Afghanistan.

”The IOC reaction was very strong and immediate,” Bubka said.

A solidarity fund for Ukraine has grown to $2.4 million and will help support 3,000 athletes and coaches who have scattered around the world. They are funded through 65 individual projects.

Bubka said 51 athletes have died since the invasion, but other Ukrainians must continue to represent their country in international events.

He also said it is hard to “keep athletes motivated in this difficult time when the war destroys our country and also destroys our lives.”

Asked at the press conference about plans for the Russian team to start qualifying for the Paris 2024 Olympics, Bach said, “We have to take this step by step. We have now the measures and recommendations in place. We do not know how the political situation evolves and how the war evolves. We hope there will be peace soon and hopefully as soon as possible.”

He said the IOC will monitor the situation and then when the time comes, take the appropriate actions.

”The dilemma that we are facing at this moment in time,” Bach said, is “we cannot fully live up to our mission to unite the entire world in peaceful competition.” 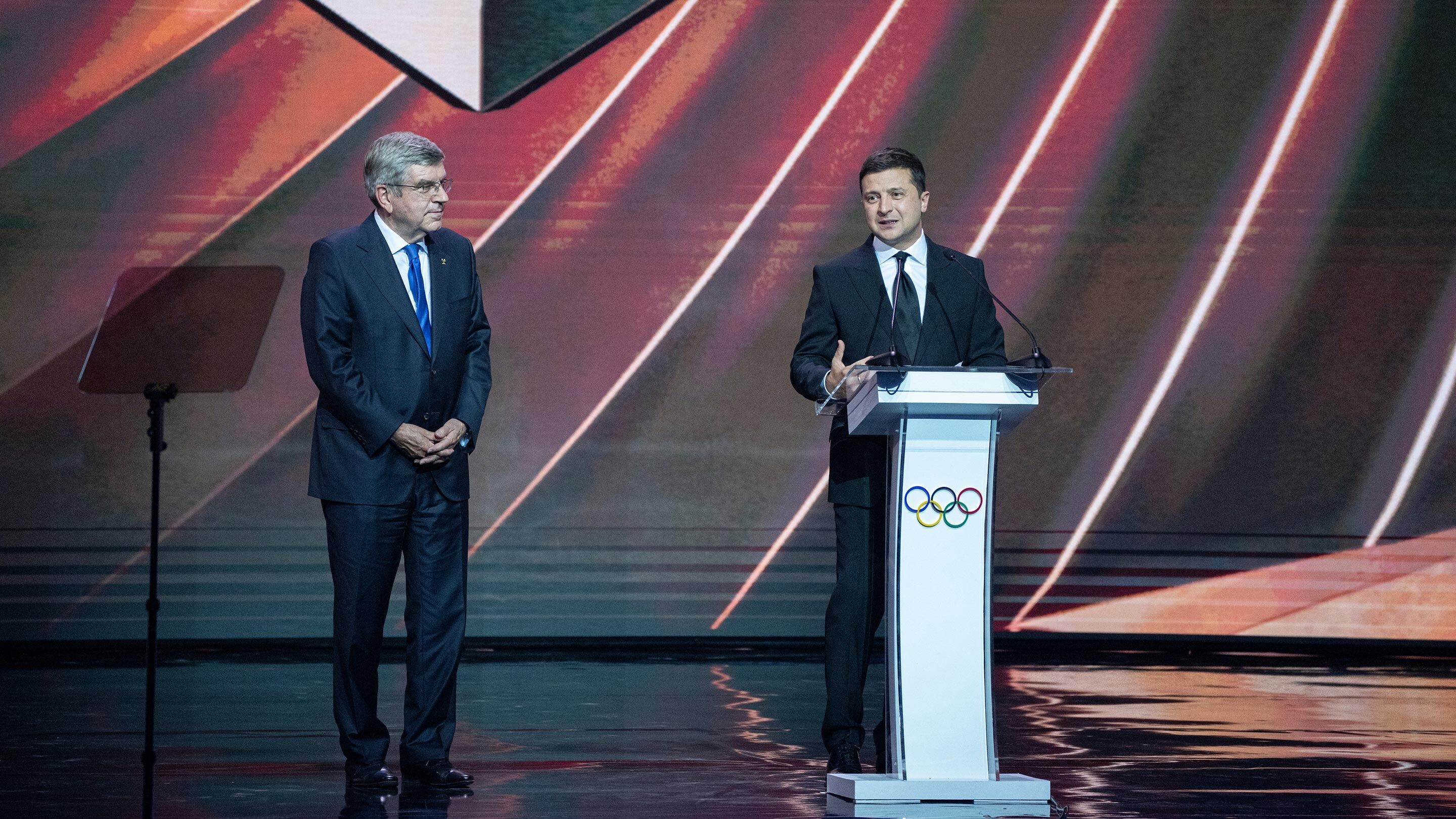 But when peace prevails, he said, “hopefully soon,” the Olympic Movement needs to be ready to help rebuild bridges.

”The world will look different after this war,” Bach told reporters following the session. “You will see a new world order and you see developing a new world security order. We cannot ignore this.”

However, he said that when it comes to political circumstances interfering in the IOC’s mission and its work, the organization desires to do everything it can to keep the Olympic Games and sport “beyond politics as much as possible.”

And yet facing reality, the IOC took the protective measures that it did. “We regret the fact at this moment in time we cannot live up to our mission,” Bach said. “We cannot have the uniting factor of peaceful events in sports. This hurts, but it encourages us to work even harder and it encourages us to hope even more that at soon as possible peace will prevail.”

Bach and his colleagues took a victory lap for holding two Olympic Games during a global pandemic. Bach said he received “countless letters and messages saying, ‘Thank you for pulling it off.’”

The president said this “gives us all confidence as we look to the future of the Olympic Movement. Fortunately we can do so from a position of strength. In our uncertain times, this position was never a foregone conclusion.”

•    The 2030 Olympic host city could be announced as soon as the next IOC session in May in Mumbai, India. Salt Lake City, Sapporo, Vancouver and the Pyrenees/Barcelona have expressed interest and could enter targeted dialogue with the IOC later this year. Bach also said there is significant interest already for the 2036 Summer Games and even for 2040.

•    The IOC aims to become a climate positive organization by 2024, lowering carbon emissions by 30 percent by 2024 and by 50 percent by 2030. This would mainly be accomplished by reducing travel or journeying by train instead of plane for short trips. And to compensate for its carbon footprint, the IOC is partnering with the United Nations for the Olympic Forest in Senegal and Mali. Part of the Great Green Wall initiative, there plans to plant more than 350,000 trees starting in 2022 in sub-Saharan Africa.

•    Richard Pound of Canada and Pal Schmitt of Hungary were unanimously voted Honorary IOC members. Both have to step down from regular membership at the end of this year after turning 80-years-old.

•    The 2nd edition of the Olympic Virtual Series will be held as part of the drive toward digitalization. Plans include a festival in Singapore in 2023.

•    As part of Olympic Agenda 2020+5, the Olympic qualifier series for four urban sports will take place in urban areas. “We are not in a position to just offer a sport event in a stadium somewhere and wait for the people to come,” Bach said. “We have to go where the people are, be it in the virtual world or be it in the urban centers.”

•    The IOC plans to finalize the human rights strategic framework by the end of the year, according to director general Christophe de Kepper and there is a “plan to amend the Olympic Charter to better articulate our human rights responsibilities.”